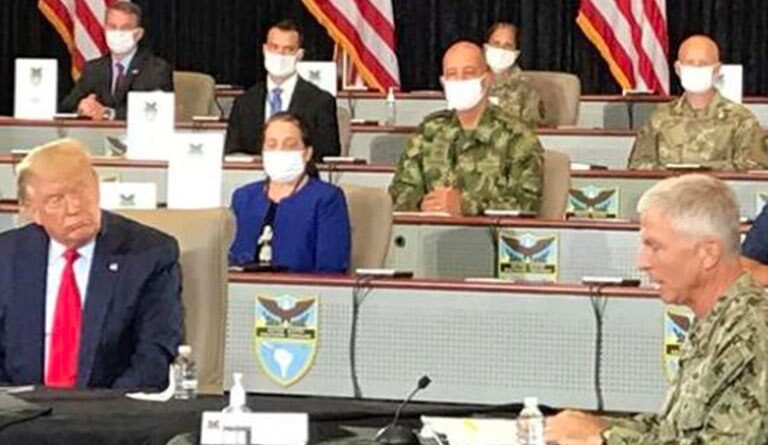 The Venezuelan ambassador to the United Nations (UN), Samuel Moncada, questioned the humiliating and degrading use of the military of Latin American countries by the United States.

As one more example of his military might, in a short video, published by Moncada on his twitter account, Admiral Craig S. Faller is seen, introducing a group of military from Brazil and Colombia to Donald Trump. The troops stand firm as they are greeted by Trump from his seat.

In the video, dated July 10, as part of a Trump meeting with the military of the Southern Command to learn about the operations carried out by their troops in some regions of Latin America, Faller tells Trump that the president of Colombia sent him one of his best soldiers and “he is here fully paid by Colombia and works for me.” This is Brigadier General Juan Carlos Correa. The same thing was said about the Brazilian military officer.

“I just wanted to introduce two to you, Mr. President: Brigadier General Juan Carlos Correa, if you stand up, General. President Duque has sent us the best and has paid for it. So he comes here fully paid by Colombia, and works for me. And it is an acknowledgment that Colombia was with us in the world, in the Korean War, and that they are with us today,” said Faller.

Then Trump says to the Colombian General Correa, “Say hello.”

Faller said the same about the Brazilian military. “And our Brazilian President Bolsonaro sent us a very new addition to our headquarters: Major General David, one of the strongest in the Brazilian Armed Forces, is in our J5 organization. Again, Brazil paid for him to come here and work for me to make a difference in security. You know, Brazil has been with us since World War II, and our relationship is getting even stronger, Mr. president.”

In this regard, Moncada wrote “Trump and his henchmen see Colombian and Brazilian generals as employees who owe him obedience. This is the humiliating colonialism that they want to impose on Venezuela. Our fight is for national dignity and independence. Venezuela’s soldiers are not Trump employees!”

“Our fight is for national dignity and independence.”

Subsequently, Foreign Minister Jorge Arreaza denounced the conspiracy that continues to develop against Venezuela from Colombia and Brazil and for which their supervised and subordinate military lend themselves under the orders of the government of Donald Trump.

“When you see this scene, your blood boils, the blood that runs through the open veins of the peoples of our Latin America and the Caribbean. I do not even want to imagine the outrage that the peoples and military of Colombia and Brazil will feel. Independence or nothing!” Arreaza said on Twitter.