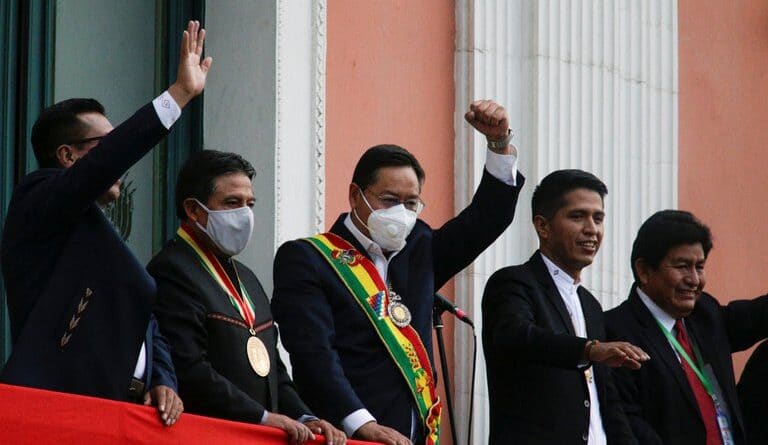 By an act of the Plurinational Assembly of Bolivia, MAS leader Luis Arce was sworn in this Sunday as the new president of Bolivia. Arce will face the challenges of healing Bolivia’s political wounds, and of overcoming an economic crisis, as he takes power after almost twelve months of dictatorship led by Jeanine Áñez.

Aymara Vice President David Choquehuanca, who took the oath prior to Arce, was then responsible for swearing in the new president before the new parliamentarians and special guests. With his right hand at the level of his heart, the new president responded with “yes, I swear,” then he and the rest of those attending the ceremony sang the national anthem.

The inauguration of the winners of the October 18 elections, who received 55.18% of the votes, revokes the acts of a year of de facto government and vindicates the victory in 2019 of the Movement for Socialism (MAS) party. The gap between Luis Arce and Carlos Mesa—representing the de facto establishment—was of almost 30%.

The day before, La Paz was packed with MAS supporters and union activists arriving from all over Bolivia to celebrate, and also to provide security, due to right-wing attempts to promote violence and disrupt the democratic process.

The party in La Paz tonight…real democracy is back… https://t.co/ZPfhdi9L7a

The indigenous 'Ponchos Rojos' are guarding the presidential place in La Paz, Bolivia, ahead of Luis Arce's inauguration tomorrow. Far-right groups have said that they'll try to stop the ceremony taking place. pic.twitter.com/xVockZU4ar

“Bolivia recovers with Luis Arce not only democracy, but also hope,” said former president Evo Morales about the new head of state, whom he called “a brother in commitment to the liberation of our beloved country,” reported Prensa Latina. Morales will return to the country on Monday from his exile in neighboring Argentina. Kawsachun News reported his arrival to San Salvador de Jujuy, the Argentinian city close to the Bolivian border, from where he plans to cross into Bolivia tomorrow.

Evo Morales lands at the Horacio Guzman airport in the city of San Salvador de Jujuy, Argentina on his first stop on his way to Bolivia. He’s accompanied by former Vice President of Bolivia, Alvaro García Linera. pic.twitter.com/Xs9grf06PX

Among other guests at the event were the foreign ministers of Venezuela, Jorge Arreaza; and of Iran, Mohammad Yavad Zarif; and the senator of the Dominican Republic, Antonio Taveras.

Also present were various heads of state including the president of Argentina, Alberto Fernández and the King of Spain, Felipe VI, who had already arrived in the country; the president of Paraguay, Mario Abdo Benítez; the leader of the Council of Ministers of Peru, Walter Roger Martos; and the foreign ministers of Uruguay, Francisco Carlos Bustillo, and of Chile, Andrés Allamand.

The most beloved foreign dignitary here at the inauguration, Argentine President @alferdez, arrives on the red carpet. The Bolivian people won’t forget what he did for Evo Morales. Evo says Fernández saved his life by providing protection in Argentina. @teleSURenglish pic.twitter.com/4RF4gRcF1i

After being sworn in, the president walked to the Palacio Quemado, the seat of government, located next to the legislative building, also in front of the Plaza Murillo in La Paz.

From a balcony of the palace, Arce presided over a parade of detachments from the Army, Air Force, Navy and Police, and received the greetings of visiting heads of state and other official envoys.

Different social organizations such as the Confederation of Indigenous Nationalities of Ecuador, and the American Council of Indigenous Peoples of Canada also joined the events.

In the swearing-in ceremony held at the Plurinational Legislative Assembly of Bolivia, homage was paid to those who fell in the defense of the Homeland during this past year, in attacks by the de facto government. In addition to deaths at the hand of the coup government, Bolivia has been seriously impacted by the COVID-19 pandemic during the second quarter of the year.

Better relations with the US
The President-elect of Bolivia, Luis Arce, expressed this Sunday his confidence that bilateral relations with the United States will be strengthened after the election of Joe Biden. Both countries have lacked ambassadors since 2008.

“With a new government we predict better relations that will translate into the well-being of our peoples,” Arce wrote on his Twitter account. Democrat Joe Biden was declared the winner of the US presidency on Saturday after defeating Donald Trump.

Featured image:  Luis Arce, the political successor and former Finance Minister of Evo Morales, took office this Sunday as the new democratically elected president of Bolivia, following the 2019 coup d’état promoted by the US government with the help of the OAS. Many noticed the Wipala flag embedded in Arce’s ceremonial belt. (Photo: David Mercado / Reuters).