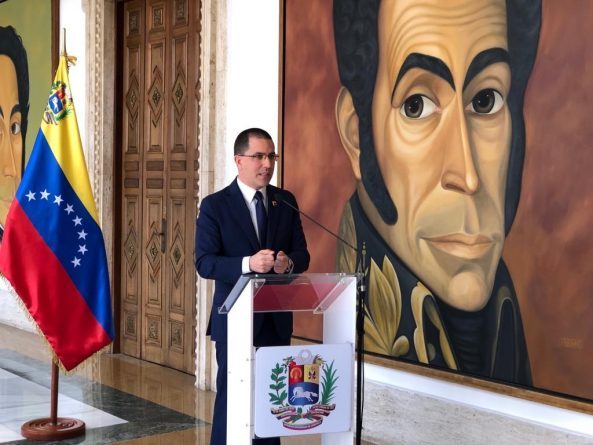 Through a statement read in the afternoon by Venezuelan Foreign Minister Jorge Arreaza, the government of his country rejected both “the case of criminal violence occurred on January 19,” in which an Ecuadorian citizen was murdered, and “the inexcusable communiqué issued by the President of the Republic of Ecuador, Lenin Moreno,” ordering the creation of “brigades to control the legal situation of Venezuelan immigrants,” which caused serious acts of violence against Venezuelans on this Sunday night. Venezuela’s statement says that “irresponsibly, has sought to establish an unusual correlation between violence against women in Ecuador and citizens of Venezuelan nationality.”

As recalled the murder of the young Ecuadorian Diana Carolina Reyes Ramirez, 22-year-old, by his partner, a Venezuelan identified as Yordi Rafael L., happened last Saturday, January 19 and caused consternation in the Ecuadorian public opinion. The video of the murder and the controversial police operation was broadcast on social networks and regular outlets.

On Sunday morning, the president of Ecuador, Lenin Moreno, issued a statement rejecting the event and indicating having arranged “the immediate formation of brigades to control the legal situation of Venezuelan immigrants in the streets, in workplaces and in the border.” In the statement, the President of Ecuador also mentioned “the possibility of creating a special permit to enter the country for Venezuelans.”

These events provoked a wave of xenophobic acts against Venezuelans in the Ecuadorian city of Ibarra, where the murder of the young woman occurred. Mobs of people roamed the streets of the city shouting “Out with poison,” assaulting residences and houses where Venezuelan migrants lived, taking them by force, beating them and burning their belongings. Dozens of videos of the attacks ran through social networks this Sunday night. Hundreds of Venezuelan immigrants were forced to leave the city.

In the communiqué issued this Monday afternoon, the Venezuelan government “denounces and rejects the decision of the Ecuadorian government to create what it has called ‘brigades to control the legal situation of Venezuelans’, a measure confessedly derived from the criminalization of Venezuelan nationality, because it is constitutive of a pattern of violation of human rights, as it is a generalized and systematic attack against a community with its own identity based on political, racial, national, ethnic or cultural reasons, for which reason the Venezuelan State reserves the decision to go to the relevant international bodies in order to determine the responsibilities that correspond within the framework of international law and make responsible directly President a Moreno of any new incident against Venezuelan citizens in that country.”

Arreaza also mention that this kind of decisions resemble a lot the Nazi practices and mention that femicide is abominable but no one can attach it to a nationality and doing this Moreno tries to attach to others it’s own security responsibility. Arreaza mentioned that only last year 88 femicides occurred in Ecuador and 2 of them were against Venezuelan women.

Diosdado Cabello talking in another press conference about this issue reiterate the words of the Foreign Minister and mention that no one can attach a single act of violence to a nationality and that we have in Venezuela a community of 500.000 Ecuadorians (10 times more than the number of Venezuelans living in Ecuador) that leave peacefully in our country and if one of them commit a crime the government could not attach that crime to the whole Ecuadorian community.

Cabello went beyond and mention that in the Bolívar state recently there was a massacre of 16 people (La Masacre de Tumeremo) and the author of that massacre was an Ecuadorian and the Venezuelan government responsibly just let the justice system work and put the criminal behind bars.

Special Plan Back to the Fatherland for Ecuador

Arreaza also reported that on Monday the Venezuelan Embassy to Ecuador authorized a special program of the Return to the Homeland Plan (Plan Vuelta a la Patria). The Venezuelan embassy in Ecuadorian territory informed through its website that two telephone lines were activated for those who wish to report or notify about a violent event that threatens the lives of Venezuelans living in Ecuador.

“As of this moment, a special plan for the Return to the Fatherland is activated for Venezuelans wishing to return to the country, that is why we invite anyone to the facilities of our Embassy in Quito / Consular Section, located on Avenida Amazonas and Eloy Alfaro, Comonsa building, floor 8, and our Consulate General in the city of Guayaquil located on Juan T. Marenzo Avenue and Orrantia Ave., Professional Center building, second floor, Ofc 220, to all those interested,” says the ministry’s website.

The embassy activated the telephone numbers 0994525289 and 0984606774 “to receive complaints and information about acts of violence that threaten the life and physical integrity of Venezuelans in Ecuador.”