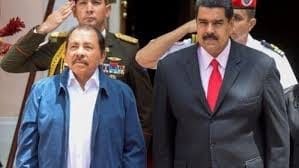 Venezuela says the OAS intention to apply the Inter-American Democratic Charter against Nicaragua is an imperialist maneuver.

Venezuela rejected this Friday, through a statement, that the Organization of American States (OAS) try to apply the Inter-American Democratic Charter against Nicaragua and considers it an “imperialist maneuver” that demonstrates the “servility to the interests of US foreign policy” .

The measure was announced last Thursday by the secretary general of the organization, Luis Almagro, under the pretext of the supposed “lack of democracy” in the Central American country.

The Venezuelan Foreign Ministry’s statement adds that in the performance of the OAS Secretary General it shows the objective instrumentalization of the OAS against legitimate governments.

The text states that “this new imperialist maneuver demonstrates the ideologization of regional politics within the entity”. Likewise, Venezuela extends to the Government and the Nicaraguan people the support, solidarity and ties of fraternity.