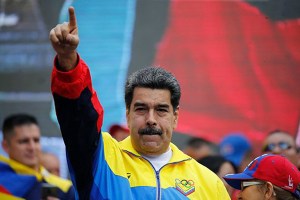 The month of September arrives and the Venezuelan people continue to get ready for the electoral process at the end of the year, in the midst of a situation that, as we have written before, is complex; not only because of the battle that is being waged in the country and in the world to contain the terrible pandemic of COVID-19, but also because of the effort that we Venezuelans are making to recover our economy, affected by the severe crisis of the capitalist system on a global scale, and by the criminal economic, financial and commercial blockade imposed by US imperialism and its lackeys, who are not ceasing in their attempts to put an end to the Bolivarian Revolution.

In this scenario, we are going to elections that are transcendental for the peace and political stability of the country; a contest in which we will be able to elect our representatives to the National Assembly in a free and sovereign manner, from among more than 14,000 compatriots who have been nominated by 107 political organizations, including the sectors of the national democratic opposition, which are not aligned with the plan designed by the supremacist Trump government to boycott these elections.

Today, as yesterday, we Bolivarians will face the US interference, going to the December 6 election with the strength given by having been able to defeat, in a civic-military union, the intentions of those who want to turn Venezuela back into a colony of the United States and appropriate our natural resources.

Even so, the challenge is enormous, since the renewed political and military threats by the current U.S. administration are accompanied by a fierce and permanent campaign against the Bolivarian Government and, particularly intense, against comrade and President Nicolás Maduro, as they did in their time against Commander Hugo Chávez; a campaign that has as its true objective to achieve the end of the process of broad transformations to which the historic leader of the Bolivarian Revolution began in 1999, sustained by the proposal to achieve the greatest amount of happiness and social security, as a strategy to cancel the infamous social debt inherited after long years of excesses of the governments of the Fourth Republic, against the great majorities of the Venezuelan People.

This campaign finds an echo in some people who, under the cover of the necessary exercise of criticism and self-criticism to which Chavez permanently summoned us; they intentionally line up their attacks against the Bolivarian Government, hiding their true personal or group interests and, besides, trying to torpedo what constitutes one of the main strengths of the revolutionary project: the unity of the forces of the Homeland; an element that has been key to avoid, in the words of the Liberator Simón Bolívar, that anarchy devours us.

This pretension is not new. We have already confronted the divisive attempts of those who hoisted the banners of “critical Chavismo” or “original Chavismo,” of those who have interestedly tried to appropriate the symbols of the Bolivarian Revolution, and the bad intentions of those who try to settle a division between “Chavistas” and “Maduristas,” a current that comrade President Nicolás Maduro himself has pointed out does not exist; as well as the opportunistic discourse that those who put their personal aspirations before the collective ones in electoral situations outline. The true patriots, defenders of this process of socialist construction, in civic-military union, are Chavistas; in the sense that Chavez himself defined it: Chávez is the People!

It is not a matter of silencing criticism and self-criticism, the essence of the revolutionary being, and much less if it comes from our People; but of carrying it out, as Comandante Chávez has often guided us, “with loyalty to the process, with loyalty to the principles It is about, the Bolivarian leader keeps telling us, to do it “…in an ethical manner, with morals”.

Therefore, this criticism and self-criticism must contextualize the complex situation we referred to earlier; it must be properly channeled, in order to prevent our collective aspirations to have some subjective behaviors, errors and even deviations that may be taking place in the ethical and ideological field and in the performance of political and/or public management, from becoming elements used by the counterrevolution to end the Bolivarian project; and that, on the contrary, they materialize to undermine the re-impulse of the policies implemented by the Bolivarian Revolution for the benefit of the great majorities. That is to say, it is a matter of practicing what Chavez told us; in order to ensure that the victorious road is maintained, to re-politicize, to reunify our forces.

It is up to us, the patriots, to work without hesitation to armor the invincible unity of the revolutionary forces, to keep us united -in our diversity-, loyal to the highest and most sacred interests of the Homeland and to the legacy of Commander Chávez.