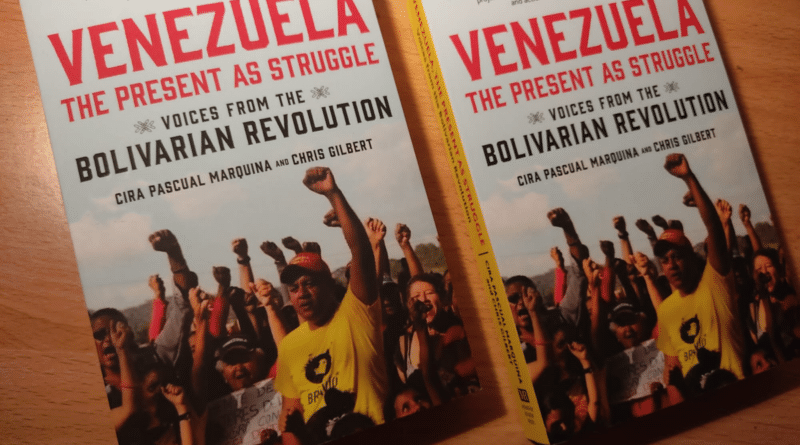 A new book by VA’s Cira Pascual Marquina and author Chris Gilbert looks at the internal dynamics of the Bolivarian Revolution today.

Cira Pascual Marquina and Chris Gilbert’s recently-released book Venezuela, the Present as Struggle (Monthly Review Press, October 2020) looks at the Chavista movement in the wake of Chavez’s death. In this difficult time marked by a harsh imperialist blockade, the Venezuelan people have lived through a serious economic, social, and political crisis. Based on a series of interviews by VA editor Cira Pascual Marquina, the book charts this fascinating, contradictory territory. Although there have been setbacks and compromises, the Venezuelan grassroots movement has not failed to articulate a range of responses that work to maintain the socialist, emancipatory project alive. Below we present a fragment of the book’s introduction, “Venezuela’s Revolutionary Process from the Inside,” by Chris Gilbert.

If a capitalist society tends to displace people as subjects, making capital into the real subject that determines the society’s development in its broadest strokes, then it is hardly surprising that a revolutionary process in which people begin to actively transform social reality, taking charge of its direction, defies all kinds of epistemological parameters and norms, including those of historiography, to say nothing of journalism and much of what passes for social analysis.

RELATED CONTENT: There is no Quarantine for Popular Power!

Precisely for this reason, the enemies of a revolutionary process are not just the evidently right-wing or pro-imperialist ones. Even forces allegedly sympathetic to a revolution can do the work of undermining its bases, by framing the revolution as a mere thing and denying the condition of active subjects to a revolutionary people. In a widely accepted view—one that can be seen operating now in Venezuela—a revolution becomes an abstract entelechy that is only secondarily and in a limited way something that people do. Or, if it is accepted that people and their actions were the initial motors of transformation, then at some point the revolution must shed its spontaneity to become a static idea, symbol, or slogan.

All of this should be resisted. Maintaining the centrality of human agency in a revolution may be crucial throughout its whole course, but it becomes absolutely essential when such a process of transformation enters into crisis. For if a revolution is a mere thing, or a relatively automatic occurrence that is out of the hands of the people, then how can it respond intelligently to the challenges faced in the course of its development? By contrast, if a revolution is a process in which the masses are active subjects, then correcting and finding a way forward will be the task of the very praxis-oriented agents that initiated the revolution in the first place.

That, in short, is the thesis that drives this book of interviews. The solution to Venezuela’s crisis today, the revolutionary path forward, is to be found nowhere else but in the thinking and acting participants in the Bolivarian Process. Based on that hypothesis—call it the wager for the revolution as a collective praxis—the book interrogates a range of subjects actively engaged in the process. What is going on in Venezuela? What is the way forward for the Bolivarian revolution?

What is most fascinating is that not only are there rich and well-thought-out answers to these questions among the interviews presented here, but there is also an enormous degree of coincidence in the responses given. Perhaps, we could go so far as to say that there is a revolutionary solution to the crisis that is collectively sketched in these pages.