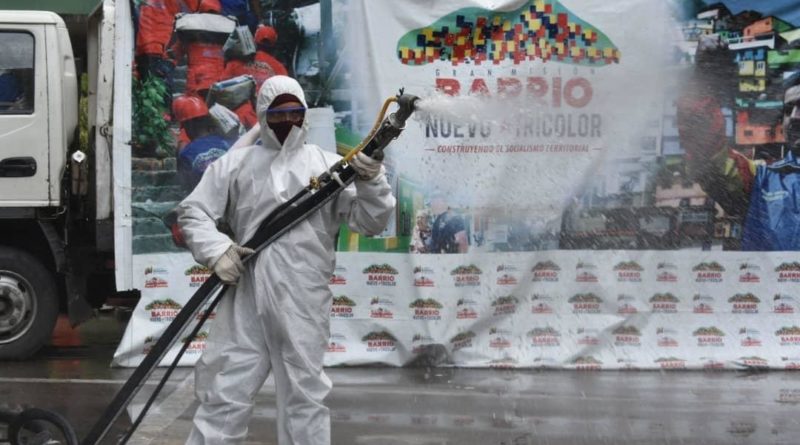 Thirty percent of the country returns to total lockdown as the national tally increases to 5,530.

Mérida, June 29, 2020 (venezuelanalysis.com) – The Venezuelan government has toughened lockdown measures in hotspot localities as the COVID-19 pandemic picks up.

Starting Monday, 30 percent of the country will return to a strict quarantine after a month of easing restrictions, in which a range of enterprises were allowed to reopen across the country on a week-on-week-off basis, including banks, hardware stores and dentists.

Under the new lockdown, all businesses are barred from operating except food and drug stores, which may open until midday, and vital services including healthcare, press and limited public transport. Citizens cannot travel outside their municipality or hold public gatherings, and many local authorities have opted to limit fuel sales to prioritized sectors. Night-time curfews remain in place in some of the worst-hit municipalities, especially on the Colombo-Venezuelan border.

The temporary rollback is to be applied to 89 of Venezuela’s 335 municipalities, including all sectors of the Capital District of Caracas and the border states of Tachira and Apure. All but one of the municipalities in Miranda State and the vast majority of those in Zulia have been included, as well as selected municipalities in the states of Aragua, Carabobo, Merida, Trujillo, Lara, Bolivar and Sucre.

RELATED CONTENT Venezuela: China’s Support is Essential Against the US Blockade

The rest of the country will continue with the week-on-week-off quarantine aimed at reactivating economic activity. Educational institutions and public sector industries remain closed, however, while sporting events and flights are entirely suspended and inter-state movement barred. Facemasks are mandatory in all public spaces.

The Maduro government also announced the creation of two “Operational Zones of Integral, Temporary and Special Defense” on Sunday to cover the 2,219-kilometer Colombian border, through which tens of thousands of migrants have returned in recent months.

The zones allow the deployment of the armed forces to reportedly assist local efforts to contain the high number of “imported” coronavirus cases. Public prosecutors have also been dispatched to the border, as authorities pledge to crack down on those evading sanitary controls.

Government sources estimate that over 70,000 Venezuelan emigrants have returned to the country since the start of the pandemic, principally from Peru, Ecuador and Colombia. On April 5, the government unveiled compulsory PCR tests and criminal background checks for those returning, as well as applying an obligatory 14-day isolation period in state-managed sanitary residences.

However, many returning migrants opt to circumvent official checkpoints by paying to use illegal paramilitary-controlled crossings known as trochas.

Speaking last week, President Nicolas Maduro warned that “the impact of the coronavirus in Colombia [with 92,000 cases] and Brazil [with 1.4 million cases] and the arrival of Venezuelans through a number of crossings is starting to impact on the country.”

Venezuela announced 518 new identified coronavirus cases over the weekend, including a record daily count of 351 on Saturday, 233 cases on Monday.

The government, which signed an agreement with the opposition to combat the COVID-19 virus earlier this month, reports that it has carried out 1.24 million tests, equivalent to 41,339 per million inhabitants, with 98.72 percent of active cases allegedly isolated in the public health system and 1.28 percent in private clinics.

Speaking on Sunday, Venezuelan Vice President Delcy Rodriguez commended efforts to contain significant localised outbreaks of the virus, particularly in Maracaibo’s Flea Market in Zulia State and in El Vigia of Merida State, where a large family party with returning migrants resulted in a hotspot.

Rodriguez also revealed that Venezuela’s healthcare system will incorporate two unnamed Cuban drugs designed to fight the coronavirus. One medication is believed to be an antiviral treatment for seriously ill patients which “has had good results in Cuba,” and the other is a preventative treatment. Venezuela health care professionals have already been using another Cuban-developed anti-viral drug known as Interferon alfa-2b, which has been employed to treat COVID-19 in China.