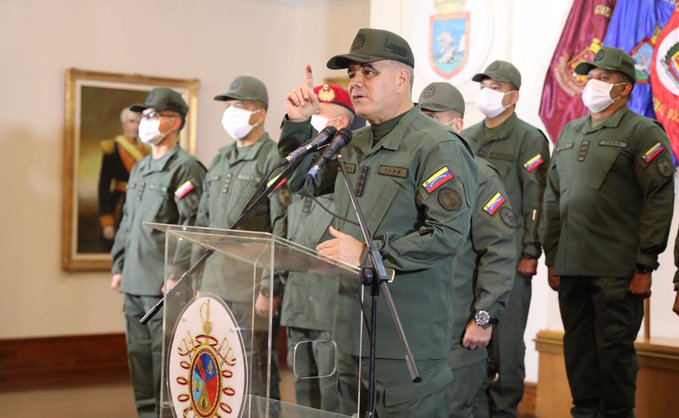 From the ministerial headquarters in Fuerte Tiuna, Padrino López said that “we have been evaluating the threats that loom in our country, repeated threats against the democratic system. It is a perverse doctrine of terrorist acts, coups d’état, attempts at political destabilization, and economic war. Venezuela has been the victim of a systematic violation of human rights, caused by criminal actions, which have disturbed our welfare state built in Revolution, as President Nicolás Maduro has said on several occasions.”

The Bolivarian National Armed Force, as the institution that guarantees territorial integrity, remains on constant alert, deployed throughout the national territory, in all geographical states, in defense of Venezuela’s democracy and to guarantee its territorial independence.

In reference to the territorial dispute with Guyana regarding the Essequibo territory, Padrino López added that “yesterday we recalled the 55th anniversary of the Geneva agreement; the only capable, valid, pertinent instrument. And if a practical and satisfactory solution is to be found for the parties, it’s the Geneva agreement, which was born precisely as a product of the erratic and perverse arbitration awarded by Paris, where all the imperialist interests were judged to have perpetrated dispossession of our national sovereignty.”

In this sense, the Minister for Defense emphasized that the Venezuelan Essequibo is not a matter for discussion. Enforcing the rule of law at sea, and exercising Venezuela’s sovereignty in jurisdictional waters, are commitments of the FANB.

“The FANB continues be deployed, and stands with its gaze always on the horizon, and guarantees stability, independence, and territorial integrity,” said Minister Padrino López.

Padrino López commented that the president of Colombia, Iván Duque, “perpetrated crimes” against Venezuela, noting that “assassinations and attempted armed incursions have been planned in Colombian territory. In fact, it is Iván Duque, who under his organization and financing has perpetrated crimes against our country as acts of war.”

“From there a continuous and blatant interference has been organized, atrocious assassination attempts and armed incursions on the Venezuelan coasts under mercenary contracts—the latter, precisely at a time when international bodies were calling for a cessation of hostilities due to COVID-19,” said Padrino López.

Covering the Minister of Defense’s statements, Venezuelan journalist Erika Ortega Sanoja posted a thread on her Twitter account, @ErikaOSanoja. Here are some of the highlights that she provided:

• “We remember February 23, 2019, when you were the champion of ‘humanitarian aid.’ In that obsession to overthrow President Nicolas Maduro, you tried to attack Venezuela. It is a wound that you have left in the people [of Venezuela] and in the FANB soldiers.”

• “You [Ivan Duque] try to wash your face with the reception of Venezuelan [migrants] under a bizarre statute, to give them an alleged humanitarian assistance that you have not been able to offer to your own people, with more than 56 thousand deaths from COVID-19 within your territory.”

• “The Colombian government has not historically existed on the border. Now you intend to go for the old and ancient maneuver of accusing us of being a shelter for terrorists and armed groups. That no longer works!”

• “You made a fool of yourself at the United Nations, giving coordinates of the alleged presence of paramilitary groups in Venezuela that were actually in your own territory.”

• “Any attempt to violate or attack Venezuela will receive a forceful reaction, as it has until today. We are on alert and in perfect civic-military union.”

Subsequently, Padrino López read an official statement in which he set out the Ministry of Defense’s position on the President of Colombia’s recent comments about Venezuela, and a similar statement regarding the Venezuelan National Assembly’s election of Jorge Rodriguez as speaker [president].