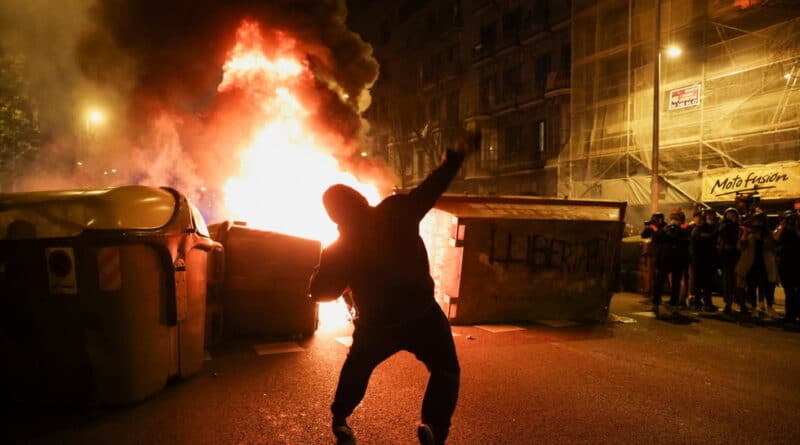 February 18, 2021.-  Rallies protesting the arrest of a rapper convicted of insulting the monarchy have continued across Spain for a third straight night. One woman reportedly lost an eye and more than 50 people were detained at demos a day earlier.

Valencia saw some of the worst violence on Thursday, where demonstrators could be seen clashing with riot police in footage posted to social media, while a helicopter appeared to be monitoring the protests from above.

Multiple injuries were reported amid the clashes in the eastern Spanish city, while some protesters appeared to hurl stones and bottles at officers.

In Barcelona, which saw the first protests two days ago, further violent clashes broke out on Thursday, as bins, bikes and a building were set on fire.

Protests in the Catalonian capital focused on the Ministry of the Interior, where a heavy police presence was in place, with helicopters also deployed. Barricades have also been erected in Barcelona and the windows of Spanish newspaper El Periódico have been smashed, according to El Pais.

The trouble follows the arrest of rapper Pablo Hasel on Tuesday in the Catalan University of Lleida, where he and dozens of his supporters had barricaded themselves inside. The artist was held after failing to report to prison for a nine-month sentence handed to him for glorifying terrorism and accusing Spain’s disgraced former King Juan Carlos of corruption in a series of tweets.

Hasel’s detention has raised major questions about Spain’s free speech laws and one of the country’s main political groups has now thrown its weight behind a campaign to pardon the rapper.

On Thursday, the far-left Podemos party, which props up Spain’s coalition government, filed an official request with the Ministry of Justice for Hasel to be pardoned, because of his “unjust” detention.

The conservative PP party, meanwhile, has slammed Podemos for not condemning the protests after tweets from its party members appeared to allege police had used unnecessary force against demonstrators.