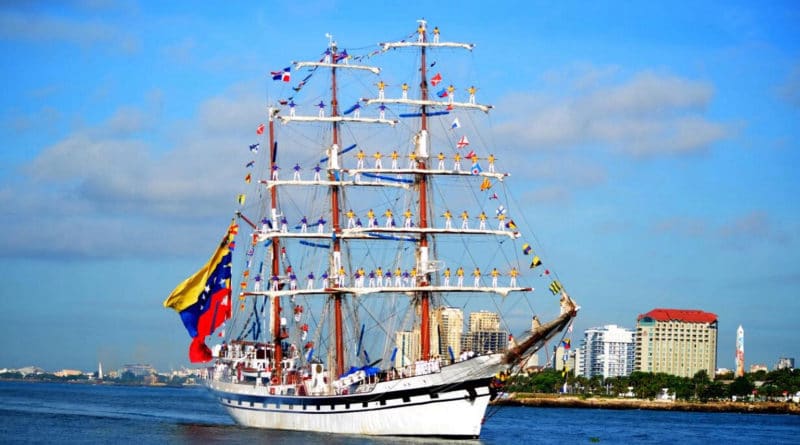 The Venezuelan government reported through a statement that its counterintelligence agencies have frustrated a plan that sought to link the Simón Bolívar School Ship with drug trafficking. In the statement, issued by the Bolivarian National Armed Forces (FANB), it is asserted that Washington has “tried to build a false positive” against this emblematic vessel of the Venezuelan Navy, which is also known as “the ambassador without borders,” with the purpose of “breaking the moral, monolithic unity and combative spirit of the body.”
The document, signed by Defense Minister Vladimir Padrino López, explains that this statement against the emblematic Venezuelan ship, which began operations 40 years ago, seeks to “continue to structure the opinion trend” that “facilitates military intervention” by the US against the South American country.
Minister Padrino has also stated that the Venezuelan president, Nicolas Maduro, “has ordered a thorough investigation” to “determine ties, responsibilities and possible participants.”

RELATED CONTENT: Lawfare and Asymmetric Warfare on Venezuela
Below the full statement:

The Venezuelan State, clinging to the principles that the Bolivarian Revolution embodies, has been carrying out a frontal battle against drug trafficking cartels that try to use our geographic space for their nefarious purposes; specially, in recent weeks we have propinated hard blows to different connections of the aforementioned cartels, which operate with the acquiescence of the United States DEA. As part of these efforts, which in just this year have allowed the seizure of more than 20 tons of drugs and the neutralization of a significant number of aircraft dedicated to this end; Our counterintelligence bodies have succeeded in thwarting a plan that sought to involve the “Simón Bolívar” School Ship of the Bolivarian Navy in this type of crime.

The perverse maneuvers of the North American government and its agencies, which acting as a Police State, are trying to discredit Venezuela and its legitimate authorities, trying to link them with drug trafficking activities, which is why they have now tried to build a false positive in this emblematic ship, which constitutes a symbol of Bolivarianism where the will of steel of the Venezuelan naval youth is forged; all this, with the infamous objective of breaking the moral, monolithic unity and combative spirit of the institution, which feels deeply indignant at such evil claims. It should be noted that in this way they also seek to continue structuring an opinion trend to facilitate military intervention.

The Bolivarian National Armed Force categorically rejects these treacherous actions of the North American empire, ratifying its strict adherence to the Constitution and the national legal order, keeping its unshakable commitment to continue fighting this criminal scourge that causes so much harm to humanity.

Independence and Socialist Homeland! … We will live and win!