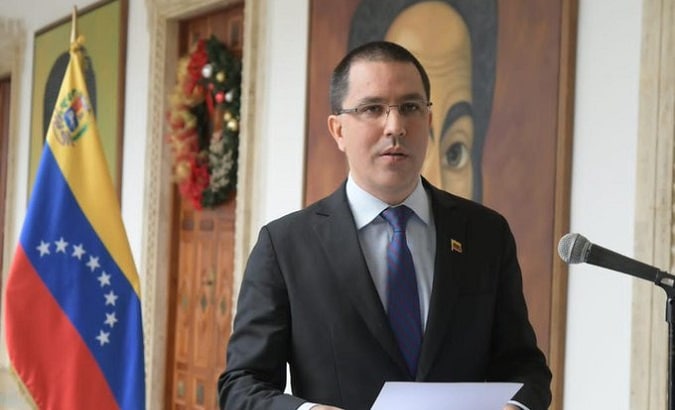 In an interview with the international news agency AFP, Venezuelan Foreign Affairs Minister Jorge Arreaza called the position of US President Joe Biden “irrational” because of the latter’s continued non-recognition of the government of President Nicolás Maduro. In effect, Arreaza said that Venezuela has not given up trying to re-establish contact with Washington in order to normalize relations between the two countries.

“We have not received any contact or positive response to the hand that President Maduro extended,” said Arreaza, referring to the messages sent by the Miraflores Palace to the White House. However, he assured that in comparison with the previous government of Donald Trump, that hardened the coercive measures against Venezuela, the Joe Biden administration appears to be “less aggressive.” The foreign affairs minister also asserted that Venezuela is “learning to live with, overcome, bypass, and outsmart the sanctions” which “have caused a lot of harm.”

The diplomat recalled a conversation he had with Elliott Abrams, the Trump administration’s special envoy for Venezuelan affairs, who had warned Arreaza that as Venezuela had frustrated the coup effort, Washington would apply “maximum pressure” in order to bring about the fall of the Maduro government in the long term.

Arreaza also narrated to AFP how Abrams had threatened Venezuela with the asphyxiation technique to be applied against the Bolivarian nation. “He told me ‘you will have no petroleum, no gasoline, no electricity, no food, until at the end the people will not be able to bear it any longer and will throw you out of power,'” related the Venezuelan minister.

The strategy of “maximum pressure”
The Venezuelan minister for foreign affairs said that many companies are afraid of being sanctioned by the United States if they do business with Venezuela. Many have received direct threats of having their commercial activities blocked altogether for maintaining relations with the Venezuelan market.

Arreaza explained how the sanctions actually work. “The vessels will pursue you; and you have to practically resort to guerrilla tactics in the high seas in order to be able to take the petroleum to your legitimate clients.” He also reminded that the United States has refused to release Venezuelan assets they had frozen, and the US’ allies have followed in its footsteps and decided to do the same.

“Difficult neighbor?”
During the interview, the Venezuelan official reiterated Venezuelan government’s request to the United Nations for “immediate assistance” to “deactivate the minefields” in Venezuelan territory, planted by Colombian paramilitary groups, with whom the Venezuelan military had intense confrontations near the border with Colombia. Arreaza called the neighboring country “the most difficult neighbor in the world” and “an imitator of the United States.” He added that the Venezuelan government has requested that the international body help open a channel of dialogue between Caracas and Bogotá, as the government of Colombia does everything to undermine Maduro’s administration.

In Colombia “there are about 20 such groups,” explained Arreaza. “Among them there is this one which they call dissidents (of FARC), but they play the same role as a paramilitary group or a narco-trafficking gang,” concluded the Venezuelan diplomat.