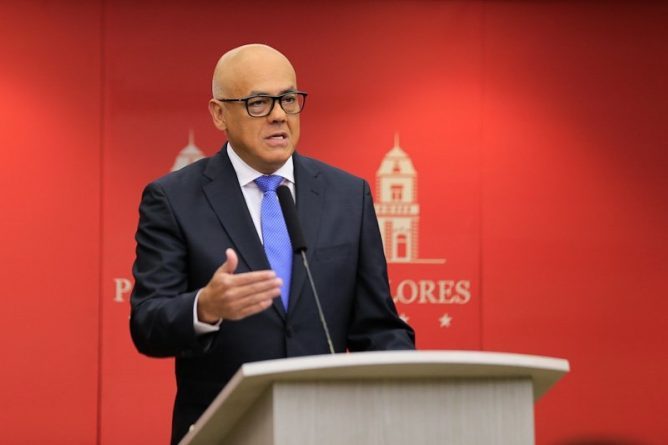 Jorge Rodriguez, vice president of Communications of the Venezuelan government, unveiled a series of videos this Thursday of the confessions of Oswaldo García Palomo, a colonel captured a few days ago and who was in charge of planning of several coups d’etat against President Nicolás Maduro, which were finally frustrated by actions of Venezuelan intelligence. García Palomo was wanted by Venezuela since last year (Maduro’s attempted assassination with drones) and, despite that, he freely entered Colombia, Brazil, Chile and the United States in November and January. In his statements, the detainee confirmed that he coordinated with a CIA agent in Colombia, and that Antonio Rivero, former director of Civil Protection and promoter of the 2014 guarimbas, was the one who put them in contact. He described Julio Borges as one of the people who was most mobilizing around the coup.

Rodriguez explained that the intelligence services managed to capture García Palomo by making him believe a military unit was going to rise up in Caracas last weekend, which made him move from Colombia to Táchira state and then to Barinas, using a vehicle provided – without his knowledge – by Venezuelan intelligence. He was captured with weapons and bracelets from a so-called “Operation Constitution”. García Palomo’s actions and his mobilization from Colombia to Venezuela to execute a military uprising were also known to political representatives and right-wing social communicators, such as María Corina Machado , the president of Colombia Iván Duque, Julio Borges and Fernando Del Rincón, who gave public statements between January 31 and February 5, noting that the government of President Maduro had only hours left.

There was also a campaign on social networks to psychologically affect the population.

This is the full video of Jorge Rodríguez’s press conference.

García Palomo said that once he met the CIA agent in Colombia, he explained his plans to overthrow the government of Nicolás Maduro, to which they leant their support because of the coup that they were going to execute in May 2018. He also described his links with businessman Parsifal de Sousa.

Rodriguez indicated that this military coup, which was to be executed in May 2018 to prevent the presidential elections on the 20th, involved the uprising of a series of units with commanders and colonels, was directed by García Palomo and was advised by the National Police of Colombia through a person named Alejandro, as well as two CIA agents who were the link with García Palomo: “alias Indiana” and “Colonel Lee”. In this way, it is concluded that the government of then President Juan Manuel Santos was also involved in the coup attempt. Cynically, Garcia Palomo pointed out that, (he knew) through “three very important sources”, including that of the CIA agent, that of a Pentagon adviser that he claims to know and “Colonel Lee”, a military action was going to occur in the first quarter of 2019 on the part of the United States government against Venezuela, so they themselves offered to carry out a military action against the Venezuelan government instead, to “avoid the disaster in which we are all going to be engulfed” and the “collateral damages against all “if there was a US military action.

In his confessions about the trip he made from Colombia to Venezuela at the end of January, Garcia Palomo said they had “three days for the military coup.” If they managed to gather the military units with which they planned to take Fuerte Tiuna, the La Carlota airport, the Miraflores Palace and the Caracas communications network, they would strike on January 27, 2019. Otherwise, they would strike on Thursday, January 31 or February 3, which coincided with the wave of false news last weekend and the public statements of journalists and politicians, explained Minister Jorge Rodríguez.  Including the detail that Garcia Palomo had already been captured. “There are hours and hours of testimony from García Palomo,” the minister explained, for which authorization was requested  from the Public Ministry to present a few minutes of statements at the press conference on Thursday.

Julio Borges and the Colombian Police involved in the organizing

García Palomo also pointed out his connections with Julio Borges, with whom he met at the request of a general of the Colombian National Police. “His first impression was that he was willing to get rid of the Venezuelan government,” Garcia Palomo said.

He explained that Borges facilitated his contacts for the coup. “I found out later that one of them was Fernando Albán”, First Justice Councilman who committed suicide by throwing himself into the void on October 8, 2018 in a Sebin building in Plaza Venezuela, involved in the drone attack against President Nicolás Maduro of last August 4th. On the attack with drones, Garcia Palomo said that since May 2018 he knew about its execution and the training in Colombia, but “I disconnected myself from that”. He said, he had heard a lot about Osman Delgado Tabonsky, who coordinated the attack on August 4 from the United States, but never met him. Jorge Rodríguez concluded that Julio Borges must have participated actively in the organization of the attack.

Among other revelations, Garcia Palomo indicated that Luisa Ortega Díaz, her husband Germán Ferrer, Rafael Ramírez and Hebert García Plaza belong to the same team that tried to contact him. He also said he had met and worked with Miguel Rodríguez Torres, with whom he met several times in Colombia, and with Hugo Carvajal and Cliver Alcalá.

Chief of Communications of the Miraflores Honor Guard provided information

In the videos, García Palomo also announced the participation of a lieutenant who worked at the Miraflores Palace, Ovidio Carrasco Mosquera, who was communications director of the Honor Guard and was captured a few days ago thanks to his testimony. He points out that the contact was given by Julio Borges. “I was in constant communication with him”, who gave him information about the security of the Palace, the units that protected it, the number of weapons along the President’s route, the moments in which the Head of State was in the Palace, among other data.

“Two or three days before ‘D-Day’ we had ruled out the Palace because it was a very strong and invulnerable unit, and the cost in lives was going to be very high. So we decided not to do anything in the Miraflores Palace, “Garcia Palomo said in another video.

Rodríguez also presented videos of the testimonies of Carrasco Mosqueda, who explains how he knew and met with Julio Borges through another contact, the former mayor of the Caroní municipality, Wilson Castro. Borges explained the courses of action to overthrow the government. He points out that he met Fernando Albán through Julio Borges, that there were 7 people in communication in a cell to whom he passed information and that, on the day of the August 4 attack against President Maduro, they communicated with him (Carrasco Mosqueda) so that he would leave the scene before the bombing. Rodríguez indicated that a new investigation should be opened about the death of Fernando Albán, because “Albán was the direct link with Carrasco. He was his partner, they had a cake company and they were doing very well, they deposited thousands of dollars “in their bank account. The administrator was the wife of Fernando Albán. Carrasco asked Borges, in addition to money, for residency (a green card) in the United States and for his daughters’ placement at prestigious universities in that country. “A receipt of payment was found by the investigation to a prestigious US university, as a pre-registration, one of the daughters of Carrasco.”

“Carrasco facilitated the process so that the drones could attack the presidential platform on August 4,” Rodríguez explained. “Mr. Julio Borges was the one who directed the whole process.” He also points out that it was Ovidio Carrasco who informed Borges where the parade was going to take place for the anniversary of the Bolivarian National Guard on August 4.