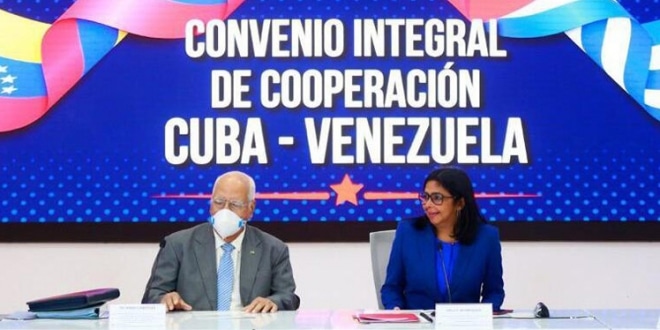 This Saturday, January 30, Venezuelan Vice President Delcy Rodríguez held a meeting with the Deputy Prime Minister of Cuba, Ricardo Cabrisas, to evaluate and strengthen more than 13 thousand joint projects that the two sister nations have in the framework of Cuba-Venezuela bilateral cooperation.

At the meeting held at the headquarters of the Vice-Presidency of Venezuela, in Caracas, Foreign Minister of Venezuela, Jorge Arreaza; the Minister for Health, Carlos Alvarado; the head of the Productive Agriculture and Land portfolio, Wilmar Castro Soteldo; and Minister for Science and Technology, Gabriela Jiménez participated together with the Cuban delegation.

It should be noted that the Cuban Deputy Prime Minister is co-chair of the Intergovernmental Commission for Comprehensive Agreement between the two nations, a body which has been developing a broad agenda of work, in addition to constant meetings and joint projects with the Venezuelan government. Part of the joint efforts that both nations share is the fight against COVID-19 pandemic.

Earlier on Saturday, the Minister for Productive Agriculture and Land, Wilmar Castro Soteldo, in the company of his management team, held a working meeting with the Deputy Prime Minister of the Republic of Cuba, Ricardo Cabrisas, who heads a delegation from the Antillean country that arrived in Caracas last Thursday to strengthen bilateral cooperation in agriculture.

At the meeting, held at the ‘Antonio José de Sucre’ hall in the Casa Amarilla in Caracas, both the Cuban and the Venezuelan delegations reviewed the cooperation agenda maintained by the two countries, according to a press release of the Venezuelan Ministry of Foreign Affairs.

Along the same lines, they evaluated the plans for cultivation of legumes and cereals and other projects related to the agricultural sector, thus reiterating the common disposition to expand bilateral projects.

During his official visit to the Bolivarian Republic of Venezuela, Cabrisas has held several high-level meetings with authorities of the Bolivarian government in the company of Rodrigo Malmierca, Minister of Foreign Trade and Foreign Investment; Nicolás Liván Arronte, Minister of Mines and Energy; Martha Wilson González, Minister-President of the Central Bank of Cuba; and Roberto López, Deputy Minister for Foreign Trade.