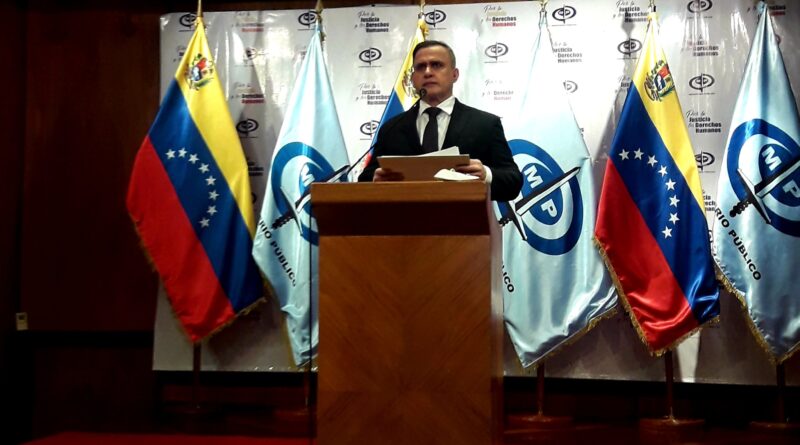 Earlier today the Attorney General of Venezuela, Tarek William Saab announced the dismantling of a corruption scheme at Lácteos Los Andes CA, a public enterprise in the dairy industry, carried out by the president of the company, Colonel Luis Augusto Piligra Jiménez.

During a press conference, Saab indicated that the Public Ministry (MP) together with the General Directorate of Military Counterintelligence (DGCIM ) pursued an investigation following complaints about irregularities within the company.

“This is a company (Lácteos Los Andes) of strategic importance for the country, it is involved with food, a human right for the people, in this case, boys, girls, adolescents, the elderly, etc.” the prosecutor emphasized.

An investigation of illicit enrichment began weeks ago because he came into the possession of various valuable assets.

“Yachts, planes, high-end vehicles, luxury apartments, farms in different parts of the country, that were obviously ill-gotten goods, are being seized as established with the Anti-Corruption Law by the competent bodies,” Saab explained.

Likewise, a network of ghost companies was detected in which friends, relatives, and lovers of Piligra appeared as legal representatives and shareholders.

Key facts
The investigations determined that he entered into contracts with companies owned by his relatives, which were registered in record time, to supply inputs for production at Lácteos Los Andes, but that they were billed at a premium.

The prosecutor indicated that the colonel also owns the Villa La Estancia company, which makes powdered milk packaged within the Lácteos los Andes plant; and it is presumed that it used the raw material for its production and promotion of the brand.

In addition Piligra owns a herd of cattle in Apure, which bears the same name as Villa La Estancia, and an agricultural farm that operates within the ranch, MALUGA CA.

“Let’s be clear that when people violate all the rules of coexistence without fear of consequences, we are talking about a psychopath,” wrote Saab in a tweet.

Saab stated that investigations are continuing therefore new arrests cannot be ruled out, and in the next few days sentencing will be announced. Saab also described as “abhorrent, that officials appointed to hold strategic positions entrusted with generating benefits for the people and minimizing the consequences of sanctions, engage in crime and corruption.”