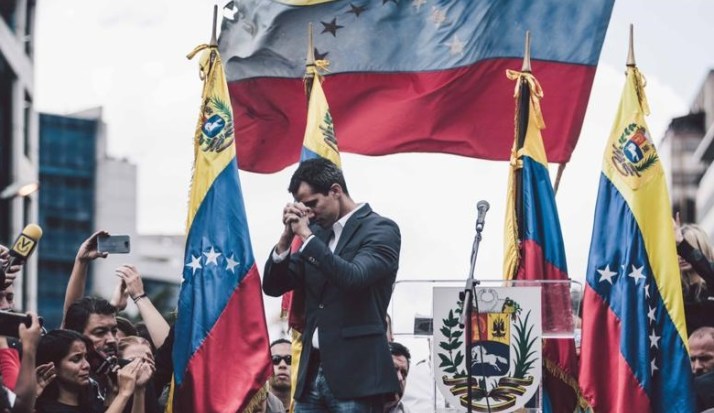 Unelected US-backed coup leader Juan Guaidó immediately moved to try to restructure Venezuela’s state-owned oil company and seek financing from the neoliberal IMF.
By Ben Norton
The right-wing opposition leader that the United States is trying to undemocratically install as Venezuela’s president immediately set his sights on the country’s state-owned oil company, which he is hoping to restructure and move toward privatization. He is also seeking money from the notorious International Monetary Fund (IMF) to fund his unelected government.
On January 23, US President Donald Trump recognized the little-known, US-educated opposition politician Juan Guaidó as the supposed “interim president” of Venezuela. Within 48 hours, Guaidó quickly tried to seize control of Venezuela’s major US-based oil refiner and use its revenue to help bankroll his US-backed coup regime.

Move Toward Privatizing Venezuela’s Oil
Venezuela has the world’s largest oil reserves. But leftist presidents Hugo Chávez and Nicolás Maduro have over the past two decades resisted attempts by US oil companies to exploit the South American nation’s plentiful natural resources.

“… the US imposed sanctions that have severely hampered PDVSA’s ability to raise new financing or restructure its crushing debt load.

Coup Financing from Neoliberal IMF
The attempted restructuring of Citgo would just be the beginning of the neoliberal capitalist policies implemented by Venezuela’s US-backed coup regime.

Ben Norton
Ben Norton is a journalist and writer. He is a reporter for The Grayzone, and the producer of the Moderate Rebels podcast, which he co-hosts with Max Blumenthal. His website is BenNorton.com, and he tweets at @BenjaminNorton.