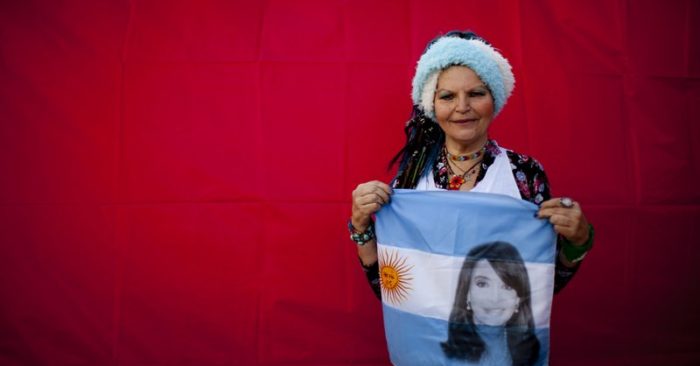 Everyone was surprised by the announcement from Cristina Fernandez when they heard the news in the media that she was going to run for vice president. As the saying goes she stepped outside of the box. She took this initiative in consultation within a small group and has now lined up with that group of forces behind that decision. This puts on display Cristina’s power and the weakness of the overall forces that constitute the space. Historically things like this have been built on behalf of loyalty, by a culture of affability and betrayal as two sides of the same coin.

The decision validated the phrase said about the surprise candidate: “you can’t do it without her and it’s not enough with her.” The decision underlines the limits of the Kirchenrism (modern day Peronism) to become an electoral majority within conditions prior to the surprising move. This is to say, the absence of enough guarantees to build a majority in a second round of voting. This is the reason why she appeals to dialog and moderation as the core of the proposal, two features that embellish the elected figure and answers to common sense demands established in politics.

A worsened crisis, with extraordinary social consequences, justifies the centrist twist shift here outside the space and inside it. Fantasies regarding a pragmatic radicalization, with subsequent progressive nominations, collapsed just like a house of cards. Nevertheless, it does not discourage its supporters. They backed the electoral ticket raising the flags of a program that vindicates a people’s government, without corrupted players, to develop an agenda for land, housing, work, the youth, and grassroots feminism. Other optimistic views, less naïve though, claim the vice-presidential candidate has enough political power to guarantee a minimal program to reestablish rights but poses however the question about how militant forces that bet on transformation can read the political game started with this move. Above all, the question is how the necessary autonomy can be preserved to uphold a social and political construction that will not legitimize an adjustment made by a close group of “friends” to bring about a different scenario for the national and social reality?

In this context, Cristina’s decision can be interpreted as an act of detachment rather than cleverness. Cleverness together with a bit of audacity, which would help describe the unforeseen event.

Something different occurs with President Mauricio Macri but which may have similar effects. In his case, the failure of his Administration results in his persona growing worn and stale. The feeling here is that they can’t win with him and they could without him. He is told that everywhere, even by his partners and friends, publicly and privately. A main difference between Macri and Cristina then is the upward and downward cycle surrounding them as perceived characters. On one hand you have a woman who is an indisputable political leader and on the other a businessman with a thirst for power but without political qualities who happened to become president amid historical circumstances. Macri is not the first president to fail and he is not the first one to develop a regressive and anti popular program. There is nothing original in that. What stands out in the current context is that Mauricio does not understand that he is ruining his own project. There are so many people realizing this that it is just possible that Cristina’s example, paradoxically, may be spread by the hand of the radical or by free-traders themselves who are feeling the winds of the gathering storm.

Cristina started a new phase of the electoral game with a brilliant maneuver but it is good to remember that other actors have not moved their pieces yet. Political actors who are anything but fools or naive, especially when the biggest prize of Argentina’s politics is at stake. What’s more important, we are still missing the decision of the greatest actors in Argentina’s politics: the gathered media, The U.S. Embassy, large entrepreneurs, and large corporations.

Cristina is reorganizing the game with her move. But she is doing it at the “cost” of moderating her own project through her presidential running mate Alberto Fernandez. Major research is not needed to introduce him, it’s enough just to look at some of the questionable moves he made while being part of Kirchner’s team — a conflict with the farmer unions, taking the pension system into public ownership, the audiovisual act, the financial recovery of Aerolineas Argentinas airline — as an experienced political manager to understand his profile and the direction of this new move.

When you try to mend a rift at the top it means that broadening the invitation to the bottom would have a harmful effect. Especially when at the center of the rift — the national Government — has exposed that what they call successes are just things enjoyed by some sectors, behind the backs of the Argentinean people, while the Nation was being led to an acute crisis.

It is well-known that history builds its personalities and that political forces do the same to impose their interpretation of reality. Therefore, Cristina’s resignation as the Kirchnerism’s natural presidential nominee has been interpreted with surprise, especially within the progressive space that had already backed her.

This is not about failing to recognize the circumstances of a historic moment, facing the possibility of assuming the presidency, taking into account economic, social, institutional and political results of the Macri Administration and the need of gathering consensus to undertake this. This is about thinking and debating how to undertake a program capable of giving answers to serious problems faced by the population. This is to say, who is going to assume the costs? Because someone is going to assume it and in the past the Argentinean people have always done that.

When Peronist Juan Schiaretti was elected governor in the Cordoba province, a feature illuminating Argentina’s politics was established: moderation. We have to admit that the chosen candidate for president, Alberto Fernandez, is a prime example of that characteristic. But we would have to wonder where is that feature found in today’s Argentina? In the country’s inflation? In indebtedness? In the wage deterioration? In the increase of tariffs in public services? In the objective criteria of Justice? In the fighting of crime? No. We cannot see it in any of those places. We can only see it in the speech of a political class concerned by its own interest and in mechanisms which guarantee governability and the building of consensus. The concern about governability and consensus would not be reprehensible if it was based on social justice in the broadest and complete sense of its definition and in personal unselfishness.

A common feature of all forces, sectors and individuals, who welcomed Cristina’s decision, is the absolute absence of participation in the decision-making process of the country. Peronism has had characteristics such as verticality, pragmatism, and the capacity to reach consensus among several social sectors. Cristina’s demonstration of the art of leading could only be overshadowed by the weakness of those who will publicly lead.

We are currently in front of progressive sectors that vindicate themselves as revolutionary and back the electoral proposal presented not as a tool to defeat through the votes the neoliberalism embodied in Macri’s Cambiemos, though they do not deny the limitations within Kirchnerism that helped lead Macri, to some extent to, victory in 2015. Twisting to the “center” by appointing Alberto Fernandez as presidential candidate is a move that may facilitate an electoral victory but which makes conditional a program to restore national and people’s values and the reconstruction of political and social organizations with capacity to boost a program to transform Argentina. The absence of a real alternative, one of sound social and political commitment to betterment leads us to the election of a manager of politics in a social context so complex as today’s.

Nobody puts into doubt that Cristina’s move has been striking. And as in football the final result will tell us if it is a checkmate or if it is a historic deed exhausted in the complete story of a political reality filled with pragmatism and the absence of important projects.