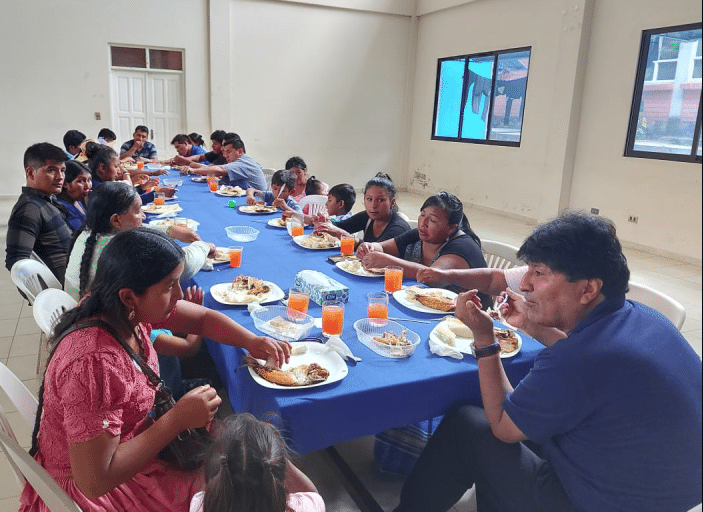 This Thursday, December 24, the former president of Bolivia, Evo Morales, met the relatives of the victims of the Sacaba Massacre, in order to hold a lunch in honor of all those peasants who died in the atrocious event.

“Relatives of the victims of the Sacaba Massacre are attending the lunch that we have organized in their honor. I tell you all that you are not alone, that we will not forget those who gave their lives for democracy. With love, we have prepared some humble presents,” the former head of state wrote in his account on the social networking site Twitter.

RELATED CONTENT: A Tale of Two Elections: US and Bolivia

Let us remember that the Sacaba Massacre occurred in Sacaba in the province of Chapare, department of Cochabamba, on November 15, 2019, during the coup against Morales. The event occurred when a group of residents, demanding the return of Evo Morales after the coup was consummated by Jeanine Áñez, was attacked violently by the police and the army.

“If you enter the city, I will hunt you down,” the then departmental commander of police Jaime Zurita threatened the Sacaba residents.

According to the Inter-American Commission on Human Rights (IACHR), 36 people lost their lives in these events. To date, no security official has been charged.

However, towards the close of October this year, the new Legislative Assembly of Bolivia approved the initiation of a trial against former de facto president Jeanine Áñez and several of her former ministers.

“Honor and glory to the fallen of Senkata and Sacaba” were the first words of Bolivian President Luis Arce in his inauguration speech.