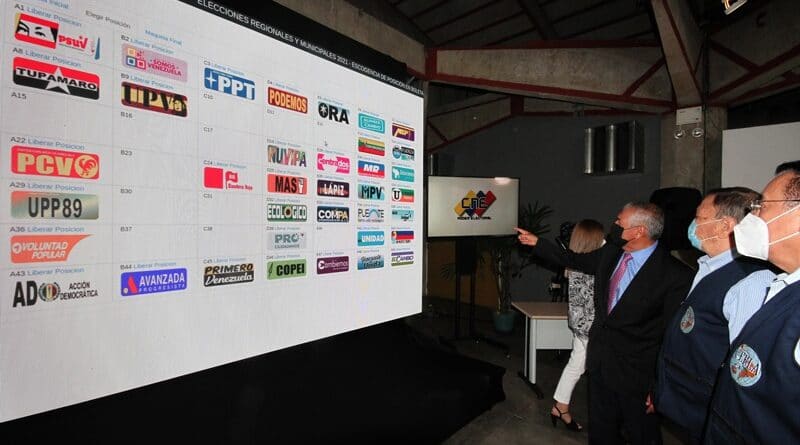 On Thursday, September 9, representatives from the different coalitions and political parties that will contend in the November 21 regional and municipal elections of Venezuela chose the spot that each will occupy on the electoral ballot.

As established by the Organic Law of Electoral Processes, the 37 political parties that registered candidates for the upcoming elections are able to choose their spot on the ballot.

It is expected that the regional parties will fill the vacant positions in the electoral ballot by Saturday, September 11.

The director general of the National Office for Planning (ONP) and Subaltern Electoral Bodies of the CNE, Luis Piedra, explained that the spots on the electoral ballot were hierarchically chosen in order of the size of the alliances and the results of previous elections.

These positions were derived from the results of the voting lists obtained in May 2018 Legislative Council elections.

According to the regulations of the national electoral body, “the ONP and groups of voters that present perfect alliances in their applications may place their electoral logos together in the ballot.”

Which party/ alliance chose which spot?
The United Socialist Party of Venezuela (PSUV) chose its position first at the top left of the ballot; this is the place it has been using during the last 5 elections.

Tupamaro is just below the PSUV, and the Communist Party of Venezuela (PCV) is two places lower than the PSUV.

The Democratic Unity Roundtable (MUD) chose the third box from top to bottom, at the left edge of the ballot, just above PCV.

Un Nuevo Tiempo (UNT), which also belongs to the Opposition’s Unitary Platform, chose its place as the third in the second column, from top to bottom, positioning itself just beside MUD.

Featured image: Representatives of parties and coalitions participating in the November 21 elections choose their spots on the electoral ballot. Photo: Twitter / @cneesvzla