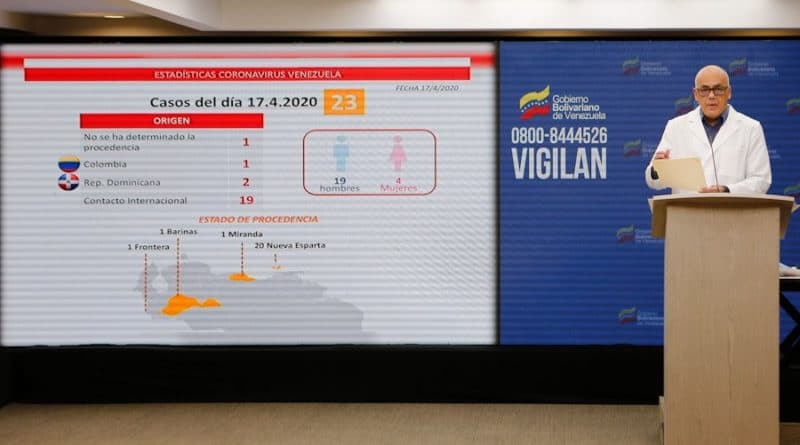 The Venezuelan government announced the confinement of two municipalities of the Nueva Esparta state (Margarita Island), after twenty people in the Gómez municipality, workers and participants of a children’s and youth baseball school, turned out positive as a result of violating the social quarantine decreed by the executive last March. This was reported by the minister of communication, Jorge Rodríguez who reported that the director of the school was put in the custody of law enforcement agencies on the instructions of President Nicolas Maduro.

Rodríguez reported in the daily briefing this Friday, April 17 at night, that on April 15 teams of the Cuban medical mission were inspecting the Pedro González sector, Gómez municipality of Nueva Esparta state, making house-to-house visits, when they found “a baseball school that recruits young people to play baseball professionally abroad.”

He reported that 63 people were there violating the quarantine: “35 athletes between 12 and 19 years of age, and the rest were workers, instructors and kitchen staff.”

Some of these young people and the owner of the school had recently traveled to the Dominican Republic and the United States. Two of the people who traveled to the Dominican Republic, on their return, were infected and asymptomatic, and they went to this baseball school, infecting the others. Jorge Rodríguez points out that, if the quarantine had been respected, there would only be 2 new cases and not twenty infected people today. “Because it was not reported by the community, and this baseball school was not closed, these people infected each other, and now we have to count 20 new cases.”

The infected are workers of 30 years, 48 years, 23 years, 46 years, 26 years and the rest are young kids between 12 and 15 years. The 20 infected are hospitalized in Comprehensive Diagnostic Centers and sentinel hospitals. He points out that the island of Margarita has beds for all cases, including hotels to isolate cases of asymptomatic people.

Owner facing charges by Public Ministry
“President Nicolás Maduro contacted the Office of the Attorney General of the Republic and placed the owner of the baseball school in his custody, for having violated the social and collective quarantine,” Rodríguez explained. “The owner of the school, when making the statement, indicates that an epidemiologist from the Nueva Esparta Governorate had visited the baseball school on March 22 and April 6, and gave the green light to the school to continue open, violating the quarantine,” he reported indignantly.
“It is reckless and irresponsible” that this epidemiologist from the Nueva Esparta Governorate has come and “found a situation so irregular that it endangered the lives of children and workers,” and has not informed the national authorities, stressed the vice president of Communication, who reiterated that the fight against Covid-19 has no political color.

Confinement and investigations
In this regard, the Communications minister reported that President Maduro decided to send the Deputy Minister of Collective Health of the Ministry of the Popular Power for Health, Marisela Bermúdez, as director of interventional epidemiology of the health department of Nueva Esparta state. An administrative and, if necessary, criminal investigation will be opened against the epidemiologist who allegedly authorized the baseball school to remain open, and which “endangered the lives of all the inhabitants of the Gómez municipality and of the entire state of Nueva Esparta.”

All baseball schools will be inspected
On the other hand, Rodríguez reported that this Saturday an inspection process will begin to the 152 baseball schools scattered throughout the national territory, to verify that a situation such as that experienced in the Nueva Esparta state baseball school is not repeated. “Absolutely all the institutions of boarding school or semi-boarding school that have not complied with the quarantine, must comply immediately,” said Rodríguez. “The boys must be in their homes with their families, in a situation of social and collective isolation.”

23 new cases in total
In addition to the 20 cases of Nueva Esparta, Rodríguez reported 3 other cases: