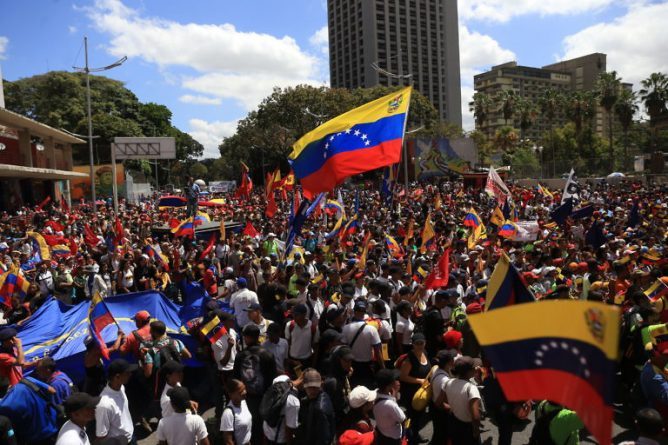 Thousands of young Venezuelans marched on Tuesday in downtown Caracas in support of the government of Nicolás Maduro, in defense of the sovereignty of their country on the occasion of the commemoration of the 205th anniversary of the Battle of La Victoria, in which young seminarians commanded by José Félix Ribas set a pattern in the struggle for Independence. At the rally on Tuesday different expressions of the “poder popular” were appreciated with chants, slogans and colorful banners against the threats of the United States government to intervene in their country.

Juvenal Ortega, representative of the Youth of the United Socialist Party of Venezuela (JPsuv) of the Arismendi municipality of Sucre state, highlighted the legacy of the commander Hugo Chávez, who praised the Venezuelan youth.

“Today we are in the city of Caracas commemorating the Day of Youth. President Chávez exalted the Venezuelan youth and put us at the forefront and that is why today we are taking to the streets of Caracas,” he stressed, and called on the youth “to engage their studies, culture, sports to eliminate the idleness that causes so much damage to society. ”

Also there, the representative of the Bolivarian Student Organization Loreana Chacón expressed her support for the revolution and the President of the Republic, Nicolás Maduro.

“We are here to represent the Venezuelan youth in support of the President; Thanks to the benefits we have received, we are better able to be in our educational institutions”, she said and called on Venezuelan youth to “keep in mind that we are the people and we must be united. ” The representative of the Front Francisco de Miranda Peter Moreno attended the demonstration and ratified his support for the revolutionary process and President Maduro.

“We are commemorating one more year of the Battle of La Victoria and today I come to support President Nicolás Maduro, who has the support of youth. Today we show the population and the opposition that we are going to the streets to defend this revolutionary process,” he said.