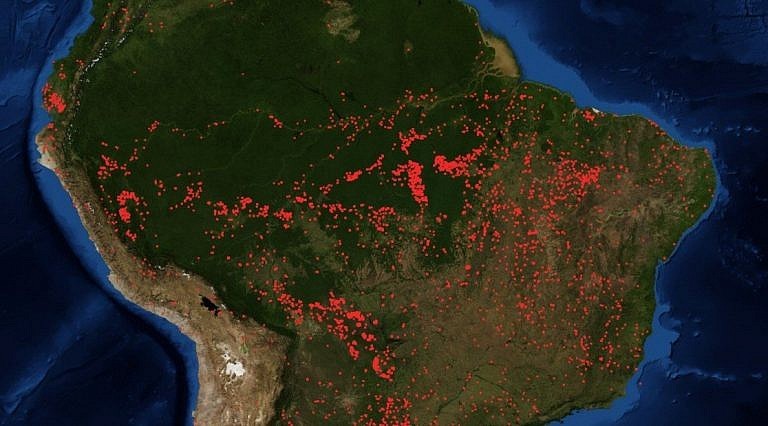 The Amazon rainforest has the capacity to absorb 2.4 billion tons of carbon dioxide every year, that is, we are talking about a quarter of all the carbon absorbed by the world’s forests. Well, this very important lung of our Earth is going through one of its worst moments after a wave of fires that is igniting alerts worldwide.
According to the figures of the National Space Research Institute of Brazil (INPE), 72,843 fires have been detected in the Amazon since January 2019. This represents an 83% increase compared to the fires recorded in 2018, the highest figure since records began in 2013.
The lung of the Earth is burning

On August 9 , farmers in the Brazilian state of Pará called for a “fire day”, also known as “the queimada”, which is a practice that involves conducting “controlled fires” to clean the land and create favorable conditions for its use. The problem is that some of these fires were carried out in unauthorized areas , which unleashed, among other things, carbon dioxide emissions soaring outside the levels considered “acceptable.”

RELATED CONTENT: Brazilian Congress Committee Approves US Use of Alcantara Base
Precisely since August 9, an emergency was declared in the Amazon jungle due to the increase in fires in Mato Grosso and Pará, two regions where Brazil’s agricultural activity has penetrated the Amazon and has stimulated deforestation. Forest fires are common in the so-called “dry season”, but they can also be considered deliberate, since, they claim , farmers illegally deforest land for livestock.
And it must be added that the Amazon has also seen its deforestation rate increase in recent months. According to July figures , every three minutes a piece of rainforest the size of a soccer field disappeared. This led to Germany and Norway withdrawing their funding from the ‘Amazon Fund’, which is a program that precisely seeks to maintain sustainability in the region and serves as an incentive to reduce deforestation.

In the last ten days the fires have not subsided, which caused a huge column of smoke reach Sao Paolo last Monday, leaving overwhelming scenes of darkened streets in the middle of the afternoon where cars have had to turn on the headlights of their cars when it was still three in the afternoon.

According to Jacquelyn Shuman, a scientist in the terrestrial research section of the National Center for Atmospheric Research, cutting down unscheduled trees and fires in unauthorized areas is causing the “forest cloud cycle” to break. Which means that there are more and more dry areas and the unique features that sustain a rainforest are disappearing.

RELATED CONTENT: Trump Cancels Denmark Trip Over Controversy on Greenland Purchase
In general, devastating conditions are being created for one of the most emblematic ecosystems in the world, this due to rising temperatures, drought caused by fires and along with deforestation. But worst of all, it is irreversible damage that would affect the entire planet and not just a region, since the unique capability of the Amazon as a whole would end up becoming a fractured jungle.
The Brazilian government minimizes the damage
Right now the criticism is directed at Jair Bolsonaro, the Brazilian president who took office in January of this year, whose environmental policy precisely focuses on the development of the Amazon region for agriculture and mining, thus ignoring the international concern for the increased deforestation and damage to the ecosystem.
To this day, Bolsonaro has rejected criticism by mentioning that “people often blame the ‘dry season’ of forest fires in the Amazon, but that is not entirely accurate. “
For his part, Alberto Setzer, a researcher at INPE, mentioned : “The ‘dry season’ creates favorable conditions for the use and propagation of fire, but the beginning of a fire is the work of human beings, either deliberately or by accident.”
President Bolsonaro recently fired the director of INPE, after the agency published figures and statistics that made clear the increase in deforestation and fire figures in Brazil. “I am waiting for the new figures, which will not be a made up numbers. If they are alarming, I will look at them in front of you,” said the president during a press conference.

Featured image: Map of the points where there are fires in the Amazon in 2019. Source: Xataka