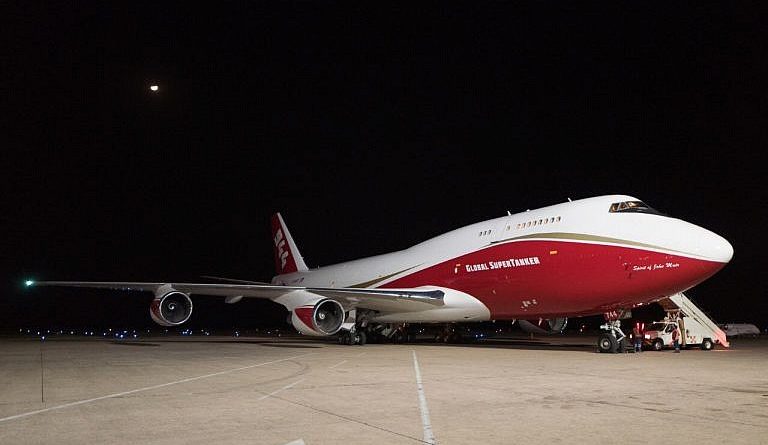 The president of Bolivia, Evo Morales, informed this Friday, through his Twitter account, of the arrival of a Supertanker aircraft, the largest tanker aircraft in the world, which will help reinforce the work done by the Armed Forces, Police, subnational governments, institutions and Bolivian volunteers to fight fires that have devastated nearly half a million hectares of forests and grasslands in eastern Bolivia.
He said they remain mobilized to “preserve life and our Mother Earth.” The announcement about the use of the aircraft to fight fires in the Chiquitanía sector was made Wednesday.

The aircraft “can load up to 115,000 liters depending on the altitude,” said Bolivian Vice President Álvaro García Linera days ago, stressing that “it is like a hundred small planes and a little more.” Each flight is expected to cost about $ 16,000. The plane departed from its base of operations in California, in the United States, and arrived at the Viru Viru International Airport to make its first flight. The Bolivian government is making arrangements with Brazil to enable the runway in the city of Corumba so that the plane has its base of operations there, García Linera said.
The vice-president added that the work of extinction from the air will be reinforced with other three helicopters, that add to the three existing ones, with capacity of discharge of 3,000 liters, and between five and ten fumigation planes with capacity of discharge of 1,500 liters of water will be hired. President Morales launched a “national emergency cabinet” on Thursday to develop a plan to quell the forest fires that are destroying the Chiquitanía and other areas in the east of the country. As Evo explained, the cabinet will be headed by the vice president, Álvaro García Linera, and will be composed of the minister of the presidency, Juan Ramón Quintana; the Minister of Government, Carlos Romero; the Minister of Environment and Water, Carlos Ortuño; the Minister of Rural Development, César Cocarico; and the Minister of Health, Gabriela Montaño.
The members of the cabinet are already in the municipality of Roboré, where an operations center will be installed. García Linera explained from Santa Cruz, the department most affected by the fires, that “the ministers have come with their backpacks to stay” for as long as necessary with Quintana in the forefront.
The vice president acknowledged that “we must double the efforts to contain the fires in these months of drought that will continue until October,” reports Erbol.