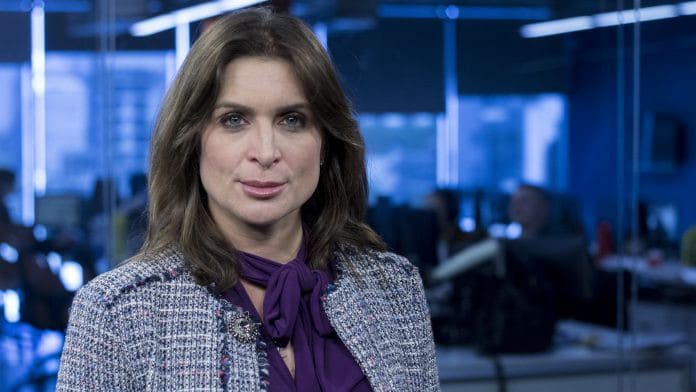 In recent days, Juan Guaidó’s emissary in the United Kingdom, Vanessa Neumann, has once again made headlines on the national scene.

This time the focus of attention is given to the death threats she made against President Nicolás Maduro through her Twitter account and the cross reactions resulting from it.

To divert attention, Neumann accused, without evidence, several journalists who defend Venezuela of forming a kind of “transnational criminal network” and asserted that her risk assessment company, Asymmetrica, has sent the profiles of these journalists to the FBI and the US Department of Justice in an openly threatening tone.

In the past, Guaidó’s emissary in the United Kingdom has also been a center of attention in Venezuela’s national politics. In September last year , an audio was leaked stating that Guaidó must avoid any claim on the Essequibo territory (disputed by Venezuela to Guyana) to win the continuing of the support of the UK Foreign Office.

A few months ago, a report by Canadian journalist John McEvoy from The Canary newspaper revealed that Neumann’s intention to withdraw Venezuela’s claim on the Essequibo went much further. It was a much deeper collaboration to benefit the UK’s long-term economic and political interests.

According to public documents obtained in the McEvoy investigation, Neumann and senior British government officials had installed a secret “reconstruction unit” office to coordinate actions in the framework of regime change against Venezuela and to favor English companies in a post Maduro scenario. Guess, who would get exclusive access to the Venezuelan market and its strategic sectors.

Neumann is an icon of the most extreme sectors of Venezuelan and continental politics: she falsely accuses Venezuela of having ties to Hezbollah, her company Asymmetrica has contacts in the structure of the US spy agencies and is a representative of the hard line of the coup. It is consistent with what the ultra-right fanatics want to hear.

Guaidó’s emissary also symbolizes the anti-Venezuelan features that have historically shaped the mentality of the oligarchy. Vanessa Neumann is the last link in one of the richest families in Venezuela, and her behavior describes quite clearly her class consciousness (without national attributes) and the formation of her ancestry.

The Neumann family represents one of the largest economic groups in the country. In the book Money Oligarchy, Domingo Alberto Rangel ranked the Neumann among the 12 main dominant groups in the Venezuelan economy, very close to Polar, the Delfino family and the Phelps in terms of accumulated wealth.

The family’s chief is Hans Neumann (Vanessa’s grandfather), a citizen of the former Czechoslovakia who emigrated to Venezuela in 1949. The historian Antonio García Ponce points out that Hans and his family left the European country “because it was impossible to have the Montana factory built by the father again under communist domination.”

And from that mud, comes this dust: Vanessa’s anger against Chavismo is related to her grandfather’s ideological rejection of the Czechoslovak Communist Party, formed after the Soviet Union liberated the country from Nazi occupation.

Hans Neumann arrived in Venezuela with empty pockets. But two things were in his favor. Hans’ uncle, Richard Barton, had made a small fortune in the United States and gave him a loan to set up a paint factory (Montana).

The financial support of the institutions of the military dictatorship in Venezuela at that time towards European immigrants was another key factor for the Neumann factory to increase its production capacity rapidly.

The next step was to enter the dynamics of the power groups already in the process of consolidation. Antonio García Ponce and Domingo Alberto Rangel agree that the businessman Eugenio Mendoza gave the first exclusive orders to the Neumann factory, giving it a privileged place in the Venezuelan market. Contact with Mendoza prompted Montana to become a supplier to foreign oil companies and other large US monopolies already running operations in the country.

Oil renting and influence peddling with the inbred Creole oligarchy were its material bases of support.

That rapid rise shaped the (locally) famous Corimon Group, a corporation that as early as the 1950s produced not only paint but a variety of chemicals and industrial packaging. In 1979 it was listed on the Caracas Stock Exchange and in 1993 on the New York Stock Exchange (Wall Street), within the framework of a process of the international expansion of Corimon: the group has a commercial presence through subsidiaries in the United States, Colombia, Mexico, Costa Rica and other countries currently.

Vanessa Neumann’s grandfather was not only in business. As a wealthy businessman in a country devastated by poverty and misery, he knew that it was necessary to create ideological apparatuses that legitimized his wealth and fostered free-market ideas. In short, he financed the ideological instruments that would protect him.

Consequently, he injected money into the creation of the Institute for Higher Administration Studies (IESA), where technocratic cadres of neoliberalism are formed (in Venezuela), and also into the media outlets El Diario de Caracas and Tal Cual. In 1964 he created the Neumann Design Institute, gaining influence in the growing advertising and marketing business.

The arrival of Chávez to the presidency was seen by the wealthy Neumann family as a threat. And that intuition was coherent with respect to their class interests: the Corimon group would abandon the privileged position that it had, politically and economically, since the 1950s.

This was portrayed by Teodoro Petkoff , [Neumann’s] personal friend and beneficiary of his financial support, in 2000:

“I will never forget the answer he gave me, twenty months ago, in January 2000, when I explained TalCual’s project to him as a quixotic contribution to the fight for the preservation of democratic spaces in the country. Only two sentences, separated by a period and followed by: ‘I am going to help you’. ‘I want to help you’. Hans, of course, never thought of this as an occasion for profit. At that point in his life, that formidable company captain did not need new business. Plus, he knew he didn’t have much life left. Once, naturally, he spoke of ‘when I am gone’ ”.

By then, the offspring of Hans Neumann (including Vanessa) were already living in the United States, integrated into prestigious elite universities to continue its business legacy and defense of the free market that had lost force in the new Venezuelan era opened by Chavismo.

Old Neumann, in one last breath, redoubled his support for Tal Cual (which Petkoff himself acknowledges), a media outlet that directly participated in the failed coup in April 2002 against Hugo Chávez.

Vanessa Neumann’s anti-Venezuelan attitude, and her permanent vocation to deliver up her own country, describes with great clarity the historical mischief of the rich against Chavismo. And this is not due to the fact that its privileged position at the economic level has been disrupted, something that only partially happened in the case of the Corimon Group, still active in Venezuela, but because its ideas and values, as well as its figures, lost popularity and appeal.

Vanessa Neumann seeks to rescue that legacy by force: to recover that kneeling country where her grandfather’s name adorned streets, avenues and prizes of the ecosystem of cultural production; when old Neumann’s ideas were the country’s navigation chart and her widely recognized and applauded figure.

Losing that hurts much more than all the wealth accumulated in the shadow of oil rent and influence peddling with the Creole oligarchy.