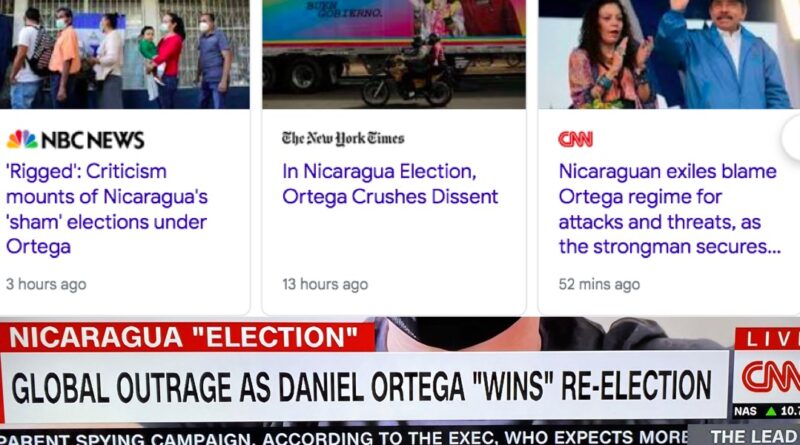 Western media are blaring headlines today about a rigged election, not in the United States or any of the other powerful nations allied with it whose elections are consistently fraudulent from top to bottom, but in the small Central American nation of Nicaragua.

A Google search brings up only news stories disparaging the Nicaragua election and its results. As flagged on Twitter by Left I on the News, CNN’s coverage of President Daniel Ortega’s victory featured a chyron with scare quotes around both the words “election” and “wins”, and a newscaster flatly stating “Ortega got 75% of the vote, results that we know are illegitimate.”

New York Times correspondent Natalie Kitroeff reported that Ortega has been “arresting all credible challengers; shutting down opposition parties; banning large campaign events; closing voting stations en masse” and that “there were no billboards or campaign posters” for the opposition, all claims that have been squarely refuted by observers reporting on the scene like Wyatt Reed, Ben Norton, Margaret Kimberly, Ahmed Kaballo, Caleb Maupin and others.

Absurd fake news from US gov't mouthpiece NY Times: Unlike this propagandist I'm actually in Nicaragua, reporting on the elections

I went to 4 different voting stations; they were all full, with a totally calm, transparent process

This mass media concern trolling about Nicaragua’s elections would not be so outrageously absurd were the elections of the US and its allies anywhere remotely close to free from fraud and manipulation.

There’s a common misconception that nothing ever changes in the US political status quo because an ideological tug-of-war between two equal and opposing factions keeps things in a state of stasis where it’s impossible to advance changes which would benefit ordinary Americans. In reality those two “factions” are in complete alignment in all but the most superficial ways, the electoral contests between them are dominated by a donor class with a vested interest in protecting the status quo, the candidates who compete in them are pre-selected by a corrupt and meticulously vetted primary process to ensure the public only ever gets to cast votes for those who will preserve oligarchy and empire, and third parties are constitutionally prevented from ever becoming politically viable.

All US elections for positions of real power are fraudulent. None of them ever permit real opposition. It’s a one-party system controlled by plutocratic and military institutions fraudulently disguised as democracy, and yet people who call themselves “journalists” have the temerity to criticize the integrity of Latin American elections without ever criticizing their own.

Just once it would be great to hear widespread discussion of US election rigging in the same alarmed tone we hear mass media concern trolls talking about nations like Nicaragua, Bolivia or Venezuela. “Very alarming how third parties are forbidden from participation in the US presidential debate.” “Concerned about the way any real opposition to the US power structure is banned from mainstream media.”

CNN running a piece on its reporters being denied entry into Nicaragua. No surprise given headlines like this. As usual, “global” in this case means “the US and its imperialist allies”. pic.twitter.com/ZxgvxNa83l

Whenever I raise this point I get people saying “Well the US doesn’t imprison its political opposition leaders like other tyrannical countries!”

That’s only because the US doesn’t have any political opposition leaders. There are no politicians in America with any political purchase who oppose the ruling power structure in any meaningful way. All true opposition has been quashed; all you ever get is two virtually identical lackeys of the oligarchic empire bickering over irrelevant narrative fluff like whether or not Critical Race Theory is being taught in schools.

There is no real opposition to the US power structure in electoral politics; it has been too aggressively stomped out for generation after generation since the days when it was openly incarcerating political dissidents like Eugene Debs for “sedition”. And anyone who comes anywhere close to threatening that power structure outside electoral politics is indeed imprisoned, as we are seeing right now in cases like Julian Assange.

There is no valid reason to believe the official imperial narratives about Nicaragua or any other empire-targeted nation, both because the US is virtually always far more guilty of whatever it’s accusing its enemies of doing and because its political/media establishment lies constantly. If you believe the mainstream narrative about any US-targeted nation you will wind up on the wrong side of debates about that nation, because the US empire is the single most corrupt and murderous institution on earth and its power is held in place by lies and propaganda.

The sooner you have your “Are we the baddies?” moment, the faster you get to truth.

The US empire—by which I also mean the client states around the world who support its agendas of planetary domination—has no business criticizing governments which are far less powerful, far less destructive, and far less corrupt. Elections throughout this US-centralized power structure are consistently rigged in myriad ways to ensure the survival of the political status quo upon which it is built, and if the mainstream news media existed for the purpose of practicing journalism this is something we would all be acutely aware of.

Until you are living in a nation with real political opposition and real elections, maybe shut the fuck up about places like Nicaragua.