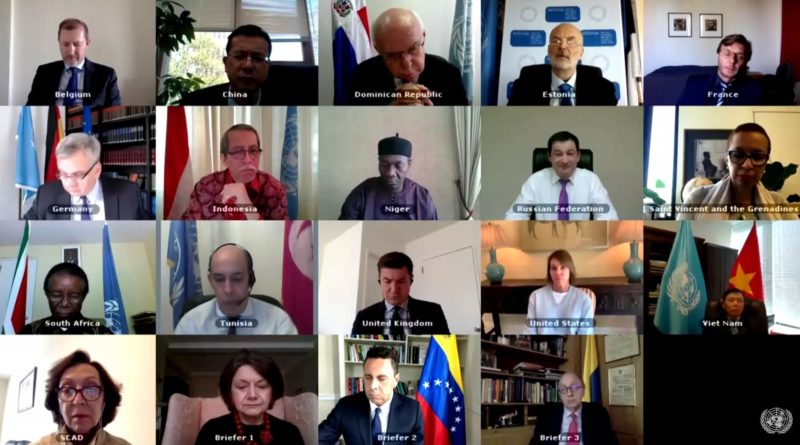 The president of Venezuela, Nicolás Maduro, stressed that Venezuela achieved a great victory on Wednesday May 20 before the UN Security Council.

“We have had a great victory in the UN Security Council. Venezuela is shining in world organizations, (…) the true and only government of Venezuela, which is the revolutionary one I preside over,” said the national president.

In this sense, he congratulated the Venezuelan ambassador, Samuel Moncada, for his exemplary speech in defense of the sovereignty and self-determination of the Bolivarian nation.

Gathered by videoconference at the Russian request, the United Nations Security Council addressed Operation Gideon for the first time, aborted on May 3 and 4 by the Venezuelan authorities with a balance of six dead, almost fifty mercenaries captured and 5 still on the run.

After the meeting, Ambassador Moncada posted a “thank you” tweet to all the countries in the Security Council that stood in defense of international law. Mentioning Russia, China, South Africa, Saint Vincent & Grenadines, Vietnam, Indonesia, Tunisia and Niger, 7 out of the 15 countries forming the Security Council.

The countries with the most supportive words were Russia, China, St. Vincent & Grenadines and South Africa.

Moscow Deputy Ambassador Dmitry Polyanskiy recalled that there are two American citizens among the detainees and stressed that it is very hard to believe that Washington was not aware of the operation.

This is the usual behavior of the US in circumstances like this. After the Bay o Pigs invasion to Cuba in 1961 several US administrations denied their evident involvement in the incident and waited until 1990, almost 30 years later, to acknowledge their active role in that also failed mercenary operation.

“Unfortunately, the US has a history of treating Latin America as its backyard,” Polyanskiy said, noting that Venezuela is now “on the menu” of the US government and that the Donald Trump administration is not even concerned with disguising it.

“Today we want to ask: What is the true purpose of the parade of the US Navy in the Caribbean? Are there more mercenaries on the ground in Venezuela? Who is responsible for attacks on critical infrastructure, including power grids?” said Polyanskiy.

The Russian representative also drew attention to the links between the operation and the team of opposition leader Juan Guaidó and considered that this disqualifies him as a political interlocutor when negotiating with the authorities.

In the session of the Security Council of the United Nations (UN), held this Wednesday, the Chinese Foreign Minister reaffirmed the position of his government before the attempt to violate the sovereignty of Venezuela and any other country.

“We condemn any attempt to attack leaders, or their peoples; as well as any attempt to change regimes. This must be rejected by the international community,” he said via videoconference.

He also urged the government of the United States to “comply with the principles of the United Nations Charter and international law.”

China likewise urged the Trump Administration not to apply coercive measures against Venezuela: “China supports Venezuela’s efforts to defend its sovereignty and independence.”

The representative of South Africa to the Security Council of the United Nations ( UN) called on Wednesday for the other countries of the world to respect the sovereignty and the constitution of Venezuela.

During his videoconference intervention, he asserted that only Venezuelans, through dialogue, can solve the political challenges they face.

“According to the Charter of the United Nations, the sovereignty and territorial integrity of Venezuela must be respected. Therefore, any attempt at regime change cannot be accepted,” he said.

In this regard, he urged support for the internal peace and resolution process, without imposing preconditions on Venezuelans.

“We have seen the continuous attempts to try to change the Venezuelan regime generating conflicts in the region, we do not want this to happen in Venezuela,” he added.

In addition, he emphasized that the enemy is currently the COVID-19 pandemic, so countries should focus on cease fires, lifting sanctions and fighting this virus.

Likewise, the Ambassador of Saint Vincent and the Grenadines to the Security Council, Inga Rhonda King, declared that these events are violations of international law: “The only sustainable solution to the crisis is an inclusive and national dialogue that meets the legitimate aspirations of the people of Venezuela, free of any geopolitical machination.”

“We reiterate our call for the unilateral punitive measures to be withdrawn, and that all members of the international community must desist from any aggression against the sovereign rights and political rights of Venezuelans during these moments when the pandemic is being fought,” she asserted.

As expected the US regime and its European satellites repeated their script of the need for regime change in Venezuela, while some of them remain critical of any use of force.