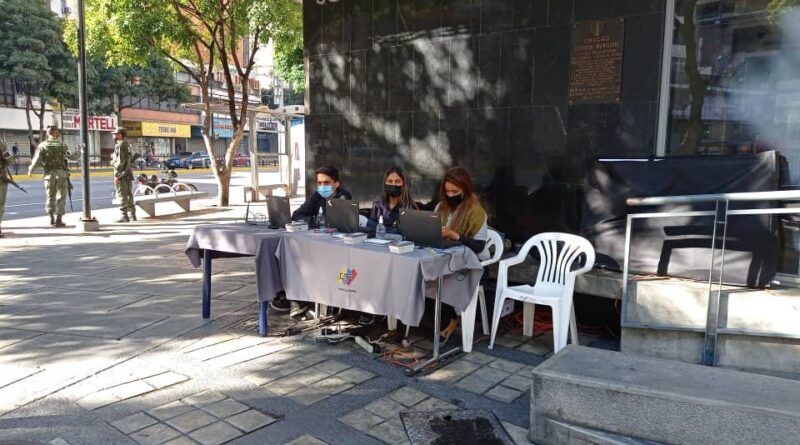 The electoral body posted on its Twitter account, “CNE reports: 100% of the reception centers [for the signing of] the recall referendum are open. #CNE #Venezuela.” The activity began at 6:00AM and was scheduled to end at 6:00PM, or when the last person in line exercises their right, as is the custom in Venezuelan electoral processes.

The promoters of the referendum needed to collect signatures from 20% of the approximately 21 million Venezuelans registered in the Electoral Registry, meaning at least 4.2 million signatures, in accordance with article 72 of the Constitution.

Since last week, when the CNE announced its acceptance of the request and setup the schedule of the process, Nicmer Evans (MOVER) initiated a retreat strategy, explaining that they did not have enough time to organize the collection of signatures from the 1,200 signature collection points positioned all over the country. This clearly shows their incapacity to prove their claims that Nicolás Maduro has a rejection rate of 80 or 90%.

Nicmer Evans’ MOVER now calls for not voting in the signature collection process called by the CNE under their request for this Sunday within the recall referendum option. The question now is, who is paying the bill? #referendo #rr https://t.co/1jIS2Bbmz4

A few days later the United Socialist Party of Venezuela’s (PSUV) Diosdado Cabello put forward a debate in Venezuela about the difference between votes and signatures in terms of secrecy. Cabello claims that the PSUV has the right to verify the identity of those signing the recall referendum. This quickly converted into an excuse for Evans to question the process, and a few hours later MOVER announced a call for people to abstain from signing for the recall referendum.

Later this Wednesday Cabello spoke in his weekly TV show Con el Mazo Dando about the outcome of the signature collection process: “I can announce that, based on the numbers that our witnesses are giving us, the opposition collected only 40,000 something signatures,” meaning only about 1% of what was needed to advance in the recall referendum process.

“These are just our numbers, of course the CNE has to issue its bulletins and announce exactly how many there were. But why do they do this to the country when they know they don’t have enough signatures?” asked Cabello.

Signature collection point in Chacao (a right wing meca) for the Recall Referendum against Maduro.
If you got 80% of the population hating Maduro how do you explain this?
Opposition polls are just lies!
No political leader regardless if left or right is very popular though https://t.co/B52GhKYkYD

This question is part of the current debate in Venezuela, where many Chavistas and even anti-Chavistas are wondering what the cost of a process like this is, especially in a country like Venezuela that is heavily affected by sanctions and fuel scarcity. Many are asking the CNE to fine Nicmer Evans and MOVER with the costs associated with carrying out the process, to deter political fiascos like this from taking place in the future.

On the other hand, Cabello mentioned that fugitive from Venezuelan justice, Rafael Ramírez, former President of Petróleos de Venezuela (PDVSA), is one of the financiers for the collection of signatures by the opposition. He has reached agreements with the United States government to support aggressions against the Bolivarian Republic of Venezuela, all while living in Europe, in luxury.

Below are some tweets showcasing the unpopular signature collection process held today, in another defeat for Venezuelan anti-Chavismo.

UPDATE: This piece was updated on January 27 at 4:45 pm correcting a mistaken information about the percentage needed to advance towards the recall referendum.