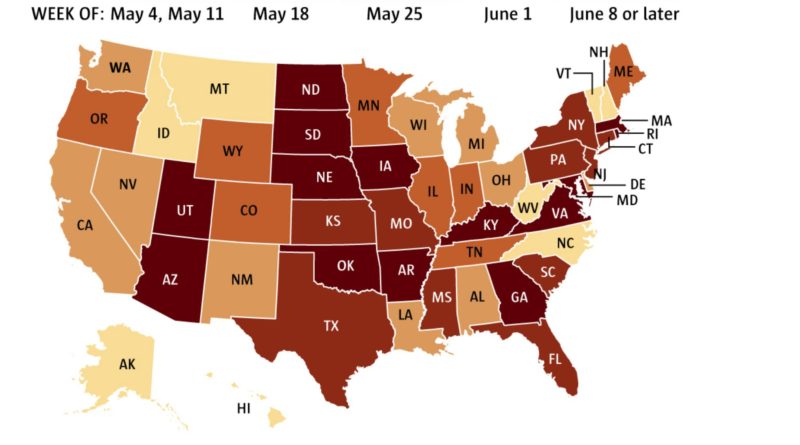 Editorial note: We post this piece as evidence of how problematic Trump pandemic policies are, especially in terms of the so called “reopening”. The model under discussion is explained too briefly at the end of the piece. While researching the topic, we noticed many US headlines on the chances of a fast “reopening” have a celebratory tone, not taking into consideration that there are no walls between US states. This seems to reflect the more individualistic US approach to fighting the pandemic.

A color-coded map from the University of Washington’s Institute for Health Metrics and Evaluation shows which states are projected to reach thresholds for easing social distancing restrictions at various times.

The University of Washington epidemiologists who set up a widely watched model projecting the future course of the coronavirus outbreak have translated those projections into suggested time frames for loosening strict shelter-at-home orders across the country.

For Washington state, that time frame is the week of May 18, which is two weeks longer than the current expiration date for Gov. Jay Inslee’s “Stay Home, Stay Healthy” order.

Based on the current projections from UW’s Institute for Health Metrics and Evaluation, four states — Montana, Vermont, West Virginia and Hawaii — could loosen their restrictions as early as the week of May 4. Other states, ranging from Massachusetts and North Dakota to Arizona, may have to wait until the week of June 8 or later.

Those projected dates could shift, of course, depending on how the institute tweaks its models, which it’s done repeatedly over the past month. And in the end, it’s up to the nation’s governors, not researchers, to determine how strict their social distancing policies are.

The White House has been pressing governors to start “opening” some states by May 1 as part of a three-phase process. Some states, such as Washington, Oregon and California, have agreed to coordinate their policies on easing restrictions.

“Each state is different,” IHME Director Christopher Murray said in a news release. “Each state has a different public health system, and different capabilities. This is not a ‘one decision fits all’ situation.”

IHME based its projections for easing restrictions on the estimated time frame for seeing the COVID-19 infection rate fall below one new infection per million residents in a given state. The institute said that’s “a conservative estimate of the number of infections each location could reasonably try to identify via active case detection and contact tracing in order to prevent COVID-19 resurgence.”

The schedule comes with caveats: For example, its projections assume that states will have adequate resources for virus testing, contact tracing and isolation of infected people. Earlier this week, Seattle-area public health officials said it’s likely to be more than a month before those resources are sufficiently available.

Also, there’ll have to be continued restrictions on large gatherings. Earlier this month, Microsoft co-founder Bill Gates — whose foundation has been at the forefront of global health issues for years — said large gatherings might have to be ruled out until a vaccine is available, which could take a year or more.

Murray said the time frame for easing back restrictions is becoming clearer largely because the restrictions have been so effective. Computer modeling of mobility patterns, based on cellphone location data, suggests that social contact has declined more than expected, especially in the South.

“We are seeing the numbers decline because some state and local governments, and equally important, individuals around the country have stepped up to protect their families, their neighbors, and friends and coworkers by reducing physical contact,” Murray said.

Looking ahead, Murray said it’ll be important for public health officials to monitor the effects of an easing in restrictions.

“Relaxing social distancing too soon carries great risks of a resurgence of new infections,” he said. “No one wants to see this vicious cycle repeating itself.”

In recent days, the institute’s projections have generated criticism from other epidemiologists. Those critics point to the model’s volatility, with estimates of COVID-19 deaths in the U.S. starting out at 81,000, rising to 93,700, falling to around 60,000, rising to 68,000, and receding back toward 60,000. Today’s updated projection estimates the death toll through Aug. 4 at 60,308.

Some critics fault the institute’s unorthodox algorithm for generating the projections, while others worry that a downward swing in the projections may give policymakers false confidence about loosening up restrictions.

“That it is being used for policy decisions and its results interpreted wrongly is a travesty unfolding before our eyes,” Ruth Etzioni, an epidemiologist at Seattle’s Fred Hutchinson Cancer Research Center, told Stat News.

In response, Murray emphasized that every computer model involves variables that have to be adjusted when new information becomes available.

“By its nature, forecasting is only as accurate and reliable as the data one uses in the modeling,” he said. “As the quality and quantity of our data increase, we will offer policymakers refined views of the pandemic’s course.”