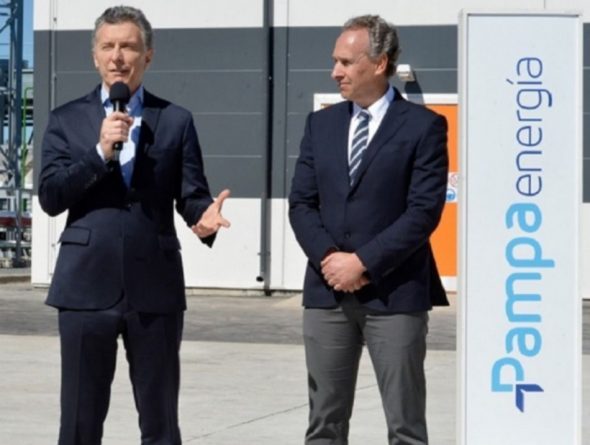 Transener, one of the companies that operates the line that fell, distributed $3,300 million pesos (US$ 76 million) in cash profits two months ago.

Marcelo Mindlin shares much more than the initials with Mauricio Macri. Business in IECSA, “tarifazos” (price hikes) for Edenor and Petrobras (owned by Mindlin), suspicions that the businessman is the president’s figurehead, benefits of money laundering, public works tenders obtained in an irregular manner such as “Paseo del Bajo” and the idea that the State depends of entrepreneurs and not vice versa, among other things. In addition to this, yesterday the historical blackout that involves them both, was added. One as a president who promised again and again an energy revolution, the other as the owner of Transener, the company responsible for the electric transmission and, immediately, in charge of the concession of the line that caused the blackout that left 48 million people without electricity. A company that, like all of Mindlin’s companies, has its golden age during Macri’s administration, and even less than two months ago distributed 3,300 million pesos (US$ 76 million) of cash profits among its shareholders.

The key to Mindlin’s responsibility in the blackout is Transener, one of the companies that he controls through the Pampa Energía holding company. Transener handles 85% of the country’s electricity transmission, especially the 500 kV lines.

The Secretary of the Electricity Market, Juan Luchilo, said that the blackout originated at some point along the 250 kilometers of the 500 kV line that runs from Colonia Elía to Campana. “In that scenario, the error occurred, was not encapsulated correctly and then contaminated the rest of the system, but we do not yet know why that happened,” said Luchilo, who operates the Transener line.

The weekly report issued by Cammesa reported that the 500 KV Colonnia Elía-Campana line was out of service since April 18 for structural replacement work, for approximately 70 days. Yesterday, that deadline had not yet been met. The same report says that “to increase the transport capacity of the LIT-GBA corridor, a provisional connection (bypass) was made between the Colonia Elía – Belgrano and Colonia Elía – Campana 500 kV lines. The work is expected to finish on 06/29 “.

RELATED CONTENT: Argentina’s Blackout is a Hit to its Fragile Economy

In case it was necessary to confirm this link, yesterday Energy Secretary Gustavo Lopetegui gave a press conference where, instead of clarifying, he made things less clear. He was flanked by two people then, one, Jorge Ruiz Sotto, owner of Cammesa, which is the Administrative Company of the Electric Wholesale Market. The other was Carlos García Pereira , director of Transener, a Mindlin company. The man from Mindlin was as sincere as the officials: “If we knew we would already be solving it, but it would not be responsible to give a hypothesis that is not properly studied, analyzed and verified”

Lopetegui, for his part, threw the blame on the Yaciretá Binational Company, which answered immediately: “THERE IS NO WAY SUCH A FAILURE WAS DUE TO A PROBLEM OF GENERATION IN CENTRAL YACYRETÁ”, they wrote in a statement, in all capital letters.

The money track
In the first quarter of 2019, Pampa Energía had earnings of 6,375 million pesos US$ 147 million). A good part came from Transener, which according to its own balance sheets, on April 25 held a meeting of shareholders “which approved, among other measures, the payment of dividends in cash in the amount of AR $ 3,300 million.” That is, the company responsible for the power lines distributed millions in cash to its shareholders a few days before the historic blackout.

The data come from Pampa Energía’s own publications and confirm that in the Macri model there are winners and losers. And that the energy companies, and in the first place those of Mindlin, won a lot during the macrismo.

Mindlin knew how to build a vertical integration of the entire energy business from its Pampa Energía holding company. It has three phases : generation, transmission and distribution. In the first, Mindlin has wind farms Mario Cebreiro and Pampa Energia II, the hydroelectric Pichi Picun Leufu, Los Nihuiles and Diamond, the power plants Piquirenda, Guemes, Piedra Buena e Ingeniero White, the central Loma de Lata and EcoEnergía and Genelba thermoelectric plants and Pilar Park. According to its numbers, it participates in the generation of 3,924 MW.

In the transmission, which are the lines that carry the energy from where it is generated to where it is distributed, it has almost a monopoly through the company Transener. On its website, it details: “It is the concessionaire of 14,489 kilometers of transmission lines and 57 transformer stations, directly operating 85% of the country’s high-voltage lines.” It also controls Transba, which has “the concession of 6,228 km of transmission lines and 95 transformer stations, which make up the Transport System by Trunk Distribution of the province of Buenos Aires.”

Mindlin also owns Edenor, the country’s largest electricity distributor. It reaches 8 and a half million inhabitants, thanks to the exclusive concession in the northwest of Greater Buenos Aires and the northern area of Capital.

The Mindlin world also includes the IECSA chapter, which he said he bought, but where, as “El Destape” revealed, he is still an associate of the presidential cousin Ángelo Calcaterra. How? Through the typical front business scheme to not appear in the control of a company. The information comes from the investigation carried out by the prosecutor Franco Picardi, who acts in the case related to the bribes for the granting of the Sarmiento underground to the consortium led by IECSA and Odebrecht together with Ghella and Comsa. Prosecutor Picardi’s investigation revealed that Calcaterra never left IECSA even though he reported that he sold it. In fact, he remained linked through an offshore company in Delaware, which he shares with Mindlin, who served as the buyer of IECSA. That offshore company is the holding company for IECSA, today renamed SACDE. The offshore company is called Emes Energía Argentina LLC. It is not clear if Emes belongs to Marcelo Mindlin or Mauricio Macri. Or both.