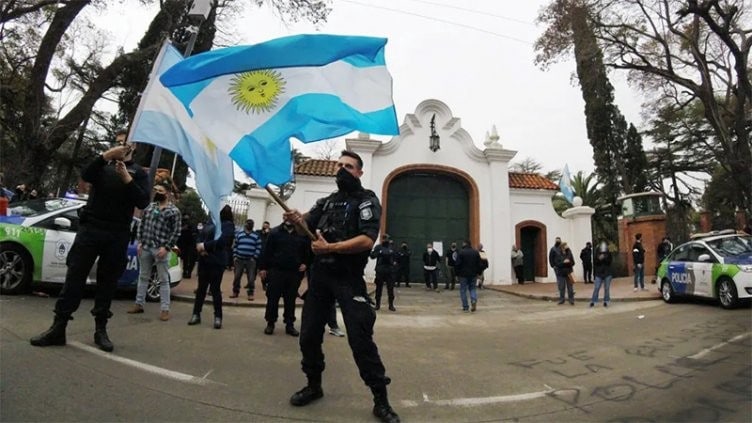 Active, retired and exonerated police officers from some municipalities in the Province of Buenos Aires, Argentina, encouraged at least 25 protests against Governor Axel Kicillof, from the ruling Frente de Todos, and some protesters ended up besieging the presidential residence.

The alleged motive for the protest was the demand for salary improvements, but there seems to be more in the background.

A protest demanding something already granted

The police protests that occurred this week included the support of the Buenos Aires Police Chief, Daniel “El Fino” García. On Monday the 7th they began to gather in front of the headquarters of the regional government, in the city of La Plata. They also protested in towns such as La Matanza, Lanús, Mar del Plata and Bahía Blanca, among other places.

On Tuesday the 8th, a mobilization of 500 policemen and civilian soldiers began in a barracks located in Puente 12, La Matanza, they made statements to the press but could not elect a commission that would dialogue with the authorities and deliver a petition, because their demands were already granted.

That day, at a press conference, representatives of the provincial government accepted that there is “a 30% delay” in the police salary and recalled that there are increases foreseen in a Comprehensive Security Plan that would be announced in a few days.

The tension reached a breaking point when Oscar Pagano, a veteran officer, climbed an electric tower and threatened to jump into the void due to the alleged lack of response to the demand by the government. The uniformed man lost a son during a robbery in 2018 and his colleagues said he is in a borderline emotional situation.

There were also protests by active and retired police officers along with their families in the provinces of Río Negro, Corrientes, Jujuy and Chubut. In the latter, the government of Mariano Arcioni, from Chubut Somos Todos, has a long conflict with state workers due to long delays in the payment of wages.

Police revenues have decreased due to the quarantine to control the global pandemic, as there is no overtime for football matches, nor activities such as robberies, prostitution, banking or gastronomy, in short, the “businesses” impacting their salaries.

On Wednesday, 9 dozens of protesters, members of the Buenos Aires Police and residents of the area, surrounded the Olivos Presidential residence with patrol vehicles and regulation weapons. They also circulated around its surroundings with an attitude that the witnesses described as seditious and coup-like; this caused a strong repudiation from leaders of the ruling party and the opposition, who agreed that a demonstration with weapons in front of the residence of President Alberto Fernández is “inadmissible” .

They created a presence with honking horns and the roar of sirens around the area and, when they were invited to enter to make their proposals, they refused. Then they demanded that the President leave and, in the end, that the meeting with his spokesmen be televised.

A neighbor in the area, named José María Álvarez, was arrested for throwing a Molotov cocktail at one of the walls of the residence. A federal judge ordered his arrest the same day.

“I ask the Buenos Aires Police to democratically lay down their attitude,” demanded that night President Alberto Fernández on an official TV broadcast along with Kicillof and mayors of the Buenos Aires suburbs of the ruling party and the opposition. The president expressed that he is “sensitive” to the protest of the security forces and that “a solution must be found.”

“This is not the way, I ask you to reflect and stop as soon as possible with this operation,” he said, questioning that the protest had been carried out with patrol vehicles and that they left “the fate of the citizens at the mercy of whoever commits crimes.”

Earlier, the Argentine president had already repudiated the actions of the troops, during an event together with Kicillof in the town of Quilmes, he stressed that “the problem is not solved by hiding in patrol cars and honking the horn.”

In addition, he argued that the government will not be “distracted” and “will face the problem (…) It is unethical to take advantage of this moment to deepen the crisis and demand things that are sometimes difficult to solve,” he said, and asked [people] “not to pay attention to the apocalyptic voices.”

The referents of the protest are officers or non-commissioned officers who were influential during the management of former governor María Eugenia Vidal, from the Cambiemos alliance (Macri), a group that demanded that the current governor “attend to wage claims” without objecting that there were armed officials.

Furthermore, during the transition from one government to another, there were no changes in leadership and no promotions. The authorities add that “there has been a delay in income, training and hierarchy for years.”

The “protest”, encouraged by the same political actors who allowed the problems that caused it grow, is a clear and transcendent breakdown of discipline. Days before Florencia Arietto, former adviser to the Ministry of Security led by Patricia Bullrich, spoke of “a situation of general complaint, we are going to call it this because I cannot speak of an uprising.”

A good part of the self-appointed spokesmen for the protest are retired or exonerated [and separated] from the force, accused of committing various crimes. Others are Juntos por el Cambio militants who seek to take advantage of police discontent to affect governance.

Alberto Fernández announced the creation of a financial support fund for the province of Buenos Aires and it will be reimbursed to a degree from the federal co-participation of the Autonomous City of Buenos Aires (the richest federal entity).

The president compared the salaries of the security forces of the two jurisdictions: “The starting salary is 49,000 pesos in the City and 37,500 in the province.” It is estimated that they are 35 billion pesos, which will serve to equalize salaries in both jurisdictions.

Once the financial part of the salary issue was resolved, the protest ended. The decision to redistribute the funds upset the opposition, former Minister Bullrich said that Fernández’s word “is worthless.”

From the regional government house of La Plata, Kicillof, accompanied by the provincial cabinet and in a videoconference with mayors from across the province, explained that the Comprehensive Security Plan includes the measures announced before the protests.

On Thursday 10, Governor Kicillof presented the Comprehensive Security Plan for the province of Buenos Aires, which includes a salary restructuring for police officers and a strategic training plan: “We have made a fundamental political decision that settled a historical debt of the provincial state with its police”, and added, “If we want to build a state policy on security matters, the police salaries have to be up to the task.”

After that, the officials returned to their positions and functions, went to the police stations where they work and the situation was practically normalized. In their social networks they highlighted their expectation that Kicillof “will follow through and hold a dialogue table” and stated: “We may agree or not with the announcement but something very good was achieved, it is the first step.”

Human rights organizations, social, trade union and political organizations, university sectors and scientists expressed their support for Fernández and Kicillof in the face of what happened. The Central de Trabajadores de la Argentina Autónoma (CTAA) declared that the opposition seeks to “alter the functioning of democracy” and was astonished at the complaints of the police force that “did not itself demonstrate during four years of Macrista adjustment.”

The final day of “protest” recalls the events of September 30, 2010 against the then Ecuadorian President Rafael Correa and the most recent events that occurred in October 2019 where the police participated in the coup against Evo Morales.

It is possible that the bell of a right wing aiming at a coup has sounded; it remains to be seen if Alberto Fernández has the ability to maneuver so far demonstrated, to face with determination what seems to come.

Featured image: The siege of Quinta de Olivos set off alarms due to events that occurred in the past that have been driven by plans to change the regime. Photo: elonce.com