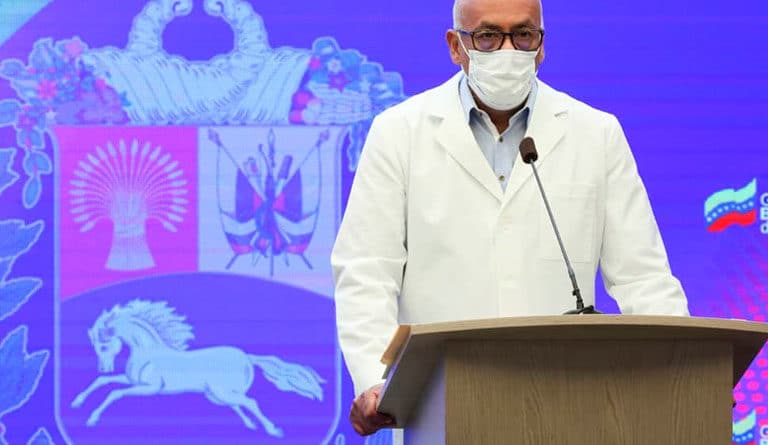 Venezuelan minister for communication, Jorge Rodríguez, reported this Sunday that in the last 24 hours in Venezuela four cases of community transmission were registered and 70 imported cases, 50 of them are from migrants returning from Colombia, 9 from Brazil and 11 from contact with international travelers. With these additions, the total number of cases due to the outbreak amounts to 2,978.

Rodríguez explained that out of the 4 cases of community transmission detected this Sunday, 3 are in the Capital District and 1 in the Trujillo state. 3 women and 1 man, while reporting that of the 70 imported cases, there are 10 infected from among our Pemón people.

He detailed each of the community transmission cases:

From Miraflores Palace, Rodríguez also reported the death of a 73-year-old Covid-19 patient living in Falcón state, who was probably infected by a market merchant in Las Pulgas (Maracaibo); with this death the total number of deceased in the country amounts to 25.

The lady had a complicated picture of type 2 diabetes and hypertensive heart disease. On June 7 her respiratory condition worsened and she was admitted to intensive care at the Alfredo Manrique University Hospital in Coro, Falcon’s capital, but she did not perform well despite the treatments received, so Rodríguez transmitted words of condolences and solidarity to her relatives.

Rodríguez warned that 1,981 of the Covid-19 cases registered by Venezuela are imported, mostly from Colombia, Brazil, Peru, Ecuador and Chile. “These countries account for 97% of all deaths in South America.”

The minister pointed out that since the installation of the Comprehensive Social Assistance Points (PASI) the country has received 59,004 Venezuelans through the border areas, of which 1981 are positive cases for Covid-19. Venezuela continues to be the country of America Latina with the highest number of diagnostic tests performed per million inhabitants, totally free.

“59,004 Venezuelans have entered through the border areas, of which 1,981 are cases positive for Covid-19,” said Rodríguez.

He added that in Venezuela the total number of tests for the screening of the Covid-19 amounts to 1,078,092 which is equivalent to 35,936 per million inhabitants.