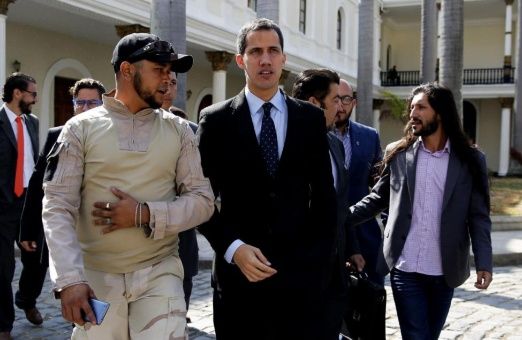 Despite US “persuasion”, through Steven Mnuchin’s talks with senior IMF officials, there was no majority recognized Juan Guaidó.

The director of the International Monetary Fund ( IMF ), Christine Lagarde , said on Saturday that within the executive committee of the financial organization there is no majority to recognize the Venezuelan deputy Juan Guaidó as “interim president” of Venezuela, a title with which he proclaimed himself in January of this year.

“We can only let ourselves be guided by the members, it is not a matter of our decision, it must be a vast majority of our members that diplomatically recognizes the authorities that they regard as legitimate and, as soon as that happens, we will act,” she said. Lagarde at a press conference after the Spring Meeting held on Saturday by the senior management of the IMF and the World Bank regarding the legitimacy of Guaidó .

What are Spring Meetings?

These are meetings between senior IMF and World Bank officials , which meet once a year with authorities from central banks, finance and development ministers, private sector executives and members of academic circles, to “debate issues that generate concern throughout the world,” says the IMF page. This 2019, the Spring Meetings were held between April 8 and 14.

This represents a new setback for the interventionist intentions of the United States against the people of Venezuela, since the US Treasury Secretary, Steven Mnuchin, had personally communicated with the IMF’s high command to urge them to recognize the Venezuelan deputy, according to his statement that Saturday.

The IMF – based in Washington, the US capital – is one of the instruments used by the Donald Trump administration to attack the Venezuelan economy with the aim of destabilizing its society and affecting its people. This was ratified on Thursday 11, when the agency suspended the access of the Government of Venezuela to 400 million dollars of special drawing rights (SDR).

A day earlier, on Wednesday, April 10, the ambassador of Venezuela to the United Nations ( UN ), Samuel Moncada, denounced the United States for intending to indebt the South American country to the IMF.