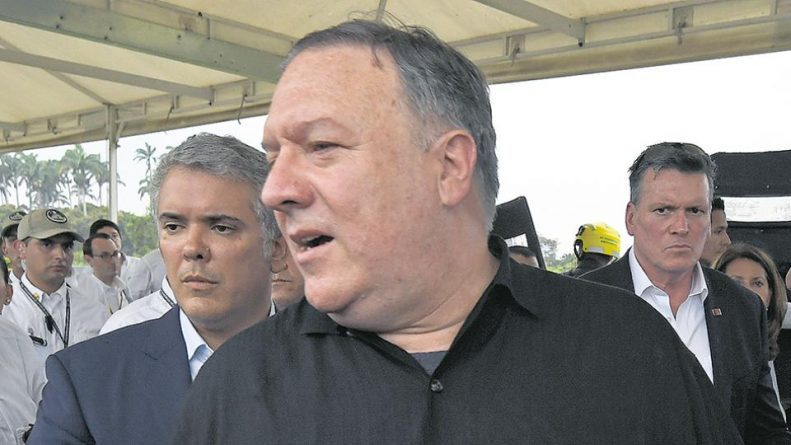 The former director of the CIA gathered support in Chile, Paraguay, Peru and Colombia for the strategy of sanctioning the Venezuelan government. The Lima Group meets today.

Mike Pompeo, US Secretary of State, former director of the CIA, was yesterday afternoon in the Colombian city of Cúcuta, on the border with Venezuela. He was accompanied by President Iván Duque, Foreign Minister Carlos Holmes, and Vice President, Marta Lucía Ramírez. They toured the collection center for humanitarian aid, and the Simón Bolívar international bridge, points that on February 23 had been the focus of political media attention when, as they had announced, they would take trucks with aid into Venezuela.

Pompeo and Duke gave a joint press conference after meeting. “The United States will continue to use all economic and political means at our disposal, to help Venezuelans through sanctions, cancellations of visas, other means,” said Pompeo, who ended the trip that he made between Friday and Sunday to Chile, Paraguay, Peru and finally Cúcuta, where the main point in each meeting was Venezuela.

Duque, for his part, referred to the commitment to maintain his support to achieve the “unrestricted defense of democratic principles in Venezuela,” highlighting the importance of having achieved the recognition of self-proclaimed Juan Guaidó’s envoy to the Organization of American States, and the Lima Group meeting today in Chile. “We are with you for the defeat of the dictatorship and to recover freedom”, he concluded.

Pompeo returns to the United States after his tour and meeting with the presidents of each of the countries, in a context marked by the need to reorder strategies regarding Venezuela, after a series of actions that did not achieve their objective to force the exit of Nicolás Maduro. Simultaneously to his tour was the one of Elliot Abrams, special US envoy for Venezuela, who traveled to Spain and Portugal.

The main axes addressed in each case and country were the need to increase both macroeconomic sanctions -as the case of Repsol that could take measures- as well as on Chavismo leaders, the dimension of the humanitarian situation, and the pointing out of the geopolitical dimension in the threat that Venezuela represents for the US, through what they point out are their alliances with Russia, Cuba, China and Iran.

The question of military intervention was less marked. Pompeo and Abrams once again ratified that all the options are on the table, although again they did not elaborate on this in a context where their allies, both from the Lima Group and the European Union, have insisted that every resolution must be peaceful and democratic.

Within this framework of the Pompeo tour, bilateral issues were also addressed with each of the countries, as well as a transversal dimension that was repeated at each press conference: the threat posed by Chinese investments in the continent. The paradigmatic case was in Chile, where the secretary of state declared that “when China does business in places like Latin America, it often injects corrosive capital into the economic bloodstream, giving life to corruption and eroding good governance.” At the same time, he threatened to “make decisions about where we put our information”, in case the Chilean government advances in a possible alliance with the Huawei company. Xu Bu, China’s ambassador to Chile, responded: “Mr. Mike Pompeo has lost his mind and has gone too far.”

The tension around this point confirmed the existing mismatch between the political dimension of the links between governments aligned with the North American strategy and the economic dimension. It is not the first time that this is evident, it is part of the tensions that were part of the central agenda at a time marked by the dispute between the United States. and China, which has the epicenter in the dimension of technology and innovation.

The Pompeo tour was followed with attention from Venezuela, in days where the political agenda had two (themes). On the one hand, Chavismo recalled the days of April 2002 when the coup d’état against Hugo Chávez was defeated, for which three days of mobilization activity took place, with the closing on April 13 with a great demonstration of strength of the Bolivarian Militia, which, according to Nicolás Maduro, reached 2 million 200 thousand in number.

The right on its part maintained its agenda of activities centered on areas of Caracas, and then, on the weekend, in the Zulia state, border with Colombia. There Guaidó made tours, speeches, a mobilization in the city of Maracaibo, in a road map that continues without proposing horizons and objectives that seem close to being able to be made, which explains part of the difficulty of not decreasing the expectations of his followers.

The meeting of the Lima Group today will take place more than a month since the previous one. There will be results of the agreements made in Pompeo’s tour, particularly in the economic and diplomatic scenarios. The military hypothesis remains outside the public agenda, although it is (present) in private areas: it was learned that last Wednesday there was a meeting organized by the think tank Center for Strategic and International Studies (CSIS, in its English acronym), in Washington, of Guaidó’s envoys to the US, the former head of the Southern Command, officials and former officials of the Department of State, of the USAID, advisers to Donald Trump, Brazilian and Colombian Diplomats, among others, to address this issue.