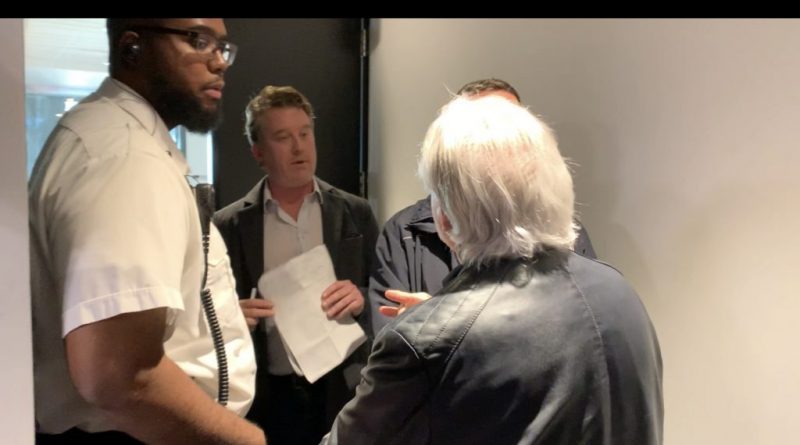 Global Research: On October 8 you were refused entry to a public event organized by the University of Concordia in Montreal that featured the so-called ambassador from Venezuela: The event: “The Crisis in Venezuela: a discussion with Venezuelan Ambassador to Canada”. What happened?

Arnold August: Since I am subscribed to the regular newsletter of the Montreal Network of Latin American Studies, which regroups all four universities in the city, I received their bulletin at the beginning of September which announced this event as a free public one. Thus, I got a ticket on September 14.

The goal of the Quebec Peace Movement, of which I am a member, as decided at its September 24 meeting, was to organize a surprise activity inside the hall where we would attempt to read our statement to be elaborated before hand. The goal was that, right from the beginning of the meeting, to surprise and verbally confront the so-called Ambassador to his face and the university authorities who invited him.

In addition to having received the ticket close to a month before the event, and several follow up emails as an attendee issued by Concordia until the day before the activity confirming my attendance, I was not allowed to enter. Security guards told me that I was “not on the list”! Upon insisting, they could not give any reason. They instead fumbled clumsily from one pretext to another. For example, they said that there was not enough space and thus they took the last 4 or 5 people to have registered off the list despite the fact that I was probably one of the FIRST people to have received a ticket. At another point they cited a possible “security threat” as a result of another very public protest with which I had nothing to do. Yet, they could still not answer the question: “why me?”

GR: What do you think alerted them to single you out?

AA: Well, our plan was to not make our intentions known publicly in order to surprise the “ambassador” face to face in the hall. Surrounded by his supporters. However, for some reason opposition to the event became public beforehand. It seems that a result of that the university, probably in collaboration with the Canadians secret service agency, scoured the list of attendees and of course came upon mine. Thus, the exclusion.

Despite not being allowed in, we made our presence felt and as the videos show: we can see what the so-called ambassador” and the Concordia authorities had to hear.

AA: It was a disaster for the very weak Trump-Trudeau forces in Montreal and a victory for those of us in Montreal who support the Bolivarian Revolution and democratically elected president Maduro.

Do you know that not one overtly pro-Guaidó supporter showed up at the meeting? Furthermore, after all the public appeals by the University, in a hall sitting 50 people, only about 25 showed up as reported to us by those who did attend!

GR: Yet they gave as one of the pretexts to bar you from entry that there was “no room”?

AA: Yes, the bottom line is that we are all a witness now of just another example of political persecution and/or media black-out in Canada against those of us across the country who oppose the Trump/Trudeau Venezuela policy.

It was also a victory for us because at the end of the meeting the “ambassador” had to leave the hall and sheepishly walk through our picket and listen to our slogans even more clearly than he had heard it from the inside. He even had to take our leaflet that was handed out to the attendees. I hope he enjoyed it. I would add this message. Do not show your face in Montreal again. You are not welcome!