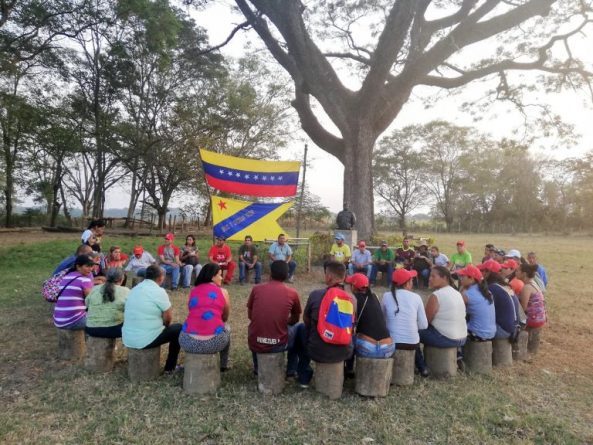 This February 4, 27 years after seeing Commander Chávez first pronounce his “for now” that began a long process enabling the birth of the Bolivarian revolution, some of the children of that birth come together for a new uprising. This is how a popular battle takes place to promote from solidarity, action; from the principles linked to self-government, self-management, and participatory and protagonistic democracy, the recovery of the productive capacities of the people in days when the drums of war resound to violate our sovereignty, to steal our natural assets and try to erase Chavismo as a political subject, the Workers’ Productive Army advances a new battle, this time in the El Maizal Socialist Commune.

This is how it is set up in the territory of El Maizal “an unconventional army for a war not conventional “, according to Sergio Requena, one of the members of the Workers’ Productive Army (EPO), with two clear objectives, the first, to contribute with the activation of productive apparatus, recovering established capacity, sharing the knowledge of men and women with high technical qualifications and important political experience generated in years of struggles in their jobs. The second objective is to moralize the Chavismo that undertakes the construction of socialism and is part of various productive initiatives, evidencing that this important part of what is necessary to win is in their hands,  people that respond to their own needs, through organization and self-management. This is what we witness in the El Maizal Commune, with the completion of the thirteenth Workers’ Productive Battle, as always under the Guevara principles of voluntary work of comrades from different companies in the country, usually from public institutions or recovered companies, who work to reactivate what is needed in order to enhance the productive apparatus present in the various Direct Social Ownership Companies (EPSDC) in a week of work, beginning on the 4th and culminating on February 9.

During these days a general diagnosis of the EPSDC was made and the battle fronts were prioritized in each of them, beginning with the recovery of silos for food, maintenance of the electrical installations, the water pumps and the lighting in El Maizal’s piggery; in the company of Sowing and Mechanization no doubt they are making the greatest efforts, from the first day activating tractors, harvesters, seeders, engines, this machinery will be put in service of the next planting cycle, which will be essential to realize in the best conditions possible, a people that resists the onslaught of the empire needs sovereign food to mount the fight.

In the Distribution Company maintenance was carried out on refrigerators, to the refrigeration cellar, and another was installed that was recovered to expand the cold line for the preservation of red meats and pork that are part of the sale operations for the communities; In the processing company, the electrical support of the pylon was adjusted and everything necessary was done to install the coffee roaster and the hammer mill, a key element to start the production of animal food. In the Livestock Company, a diagnosis of the mechanized milking line that has been recently recovered is made to put it into operation or at least to make the list of necessary supplies for it; In the Crop House Company, two “motocultores” are being recovered, in addition to carrying out maintenance on the irrigation system. Everything done at the beginning of Thursday, in the middle of the battle, that is, this list will be extended on Saturday the closing day.

This new battle also allows the constitution of a space with an extraordinary power, by locating two experiences of popular power, which take Chávez’s actions as an ethical / political reference and which show part of the store (of experience) at the service of the people’s struggle in the strategic task of the construction of Socialism, of the full democratization in the political, the social and the economic.

That power is expressed with a Workers’ Productive Army of only 21 members present in this battle (of 2,300 registered as volunteers), plus a significant number of commuters that with spirit, work capacity, political clarity and organization exemplify what could be realized if this initiative were an official line, recovering the wide installed productive capacity that the State possesses to deliver to the organized people. It is an action that has always had to be carried out but, at a time of threats of foreign military intervention, financial blockade and a clear strategy of suffocating the country’s production, must be a revolutionary obligation.

Only the people save the people with the necessary tools to overcome the battles we have in the current situation. Given the strategy of privatization of multiple productive units by the government, it is necessary to resume the construction of social property in key sectors for the sustainability of the Revolution, thinking of the worst scenarios. Saturday will be the closing of the Productive Battle, the same day in addition, an accounting of the fronts, with their victories or the analysis of what is needed to convert them swiftly into triumphs in favor of the productive capacity of the people, cultural activities will be added and sports between the EPO and the El Maizal Commune, thinking about the challenges to come, on the necessary ways to win, always starting from the fact that we are joy and life.

Let the world know, here we will defend the peace, the constitution and the legitimacy of President Maduro, for that reason we continue in struggle with Chavez and socialism as a route, because we are those of the commune or nothing.