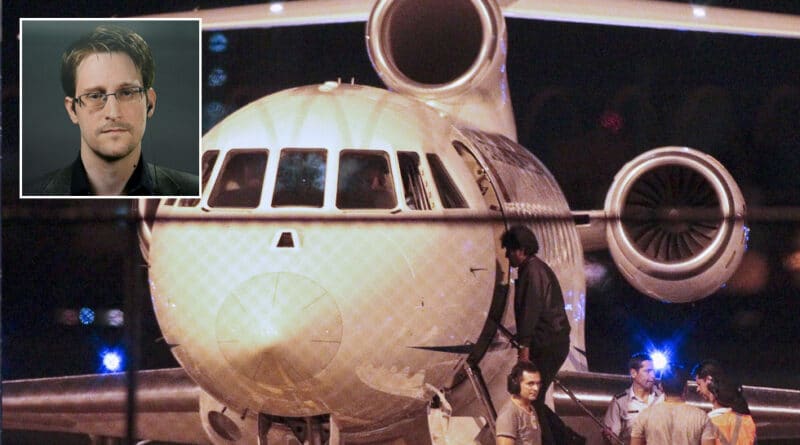 Western governments have blasted Belarus for allegedly forcing a plane to land on its soil in order to arrest an opposition activist. But they sang a different tune in 2013, when a similar attempt was made to grab Edward Snowden.

On Sunday, a Ryanair commercial flight from Greece to Lithuania was diverted from its course shortly before leaving Belarusian airspace and made an emergency landing in Minsk. This allowed the Belarusian authorities to take Roman Protasevich, former chief editor of Polish-based opposition Telegram channel NEXTA Live, into custody. In his home country, he is facing serious charges of inciting mass unrest with his coverage of anti-government protests last year.

Western governments condemned Minsk, accusing it of forcibly grounding the plane under a false pretext of a bomb threat. However, when, for example, US Secretary of State Antony Blinken called the events a “brazen and shocking act”and demanded an international investigation, the call seemed hypocritical to some observers. After all, wasn’t that the same thing that the US and its allies did when they wanted to snatch NSA whistleblower Edward Snowden?

Obama administration did the same thing, but to a head of state, Evo Morales, in an attempt to kidnap Snowden. https://t.co/Swqup1Q7C7

The incident in question happened in July 2013, shortly after Snowden’s name became globally known. The US annulled his passport, and the man who helped expose US invasive electronic surveillance was stranded in the transit zone of a Moscow airport, unable to leave.

Russia at the time hosted an international energy conference, and one of the guests, then-President of Bolivia Evo Morales, indicated that his country could grant Snowden political asylum. Some people in Washington apparently presumed he would take Snowden with him to Bolivia.

"major diplomatic fiasco, with Bolivia, Venezuela & several other Latin American countries lashing out at the USA & accusing it of having strong-armed European countries into redirecting the official Bolivian presidential plane."#Belarus#Snowdenhttps://t.co/JC4ueHR7Nt

After Morales’ jet departed from Moscow, several European countries denied it the use of their airspace, which ultimately forced the aircraft to land in Austria. Local officials claimed they searched the plane, but the fugitive American was nowhere to be found. The plane had flown from Moscow’s Vnukovo airport, not Sheremetyevo airport, where Snowden was stranded at the time.

The incident was widely condemned by Bolivia and some of its friends in Latin America. France and Spain eventually apologized for their parts in the episode.

WikiLeaks founder Julian Assange later claimed the US had fallen for a ruse from his team who were discussing the possibility of smuggling Snowden out of Russia on a presidential plane of another country, but were mentioning Bolivia instead to distract US intelligence. The smuggling plan was never put into action though. Snowden ultimately received political asylum in Russia itself and has lived there ever since.

Looking forward to tortured media explainers reassuring us that Obama/EU forcing Morales' plane down to arrest Snowden (who it turned out wasn't onboard) was very civilized and NOT AT ALL like Lukashenko forcing down plane to arrest a wanted dissident.https://t.co/cjRMv40YaJ

The parallels between the two situations are hard to miss, and plenty of people on social media pointed to the similarities. Snowden’s name trended on Twitter on Monday, as the discussion of the events in Belarus raged on the social media platform.

The Morales plane case, however, is not the only recent example of when air traffic safety rules played second fiddle to the wishes of a certain government to make politically-motivated arrests. And it doesn’t even take a political heavyweight like the US to do it and not hear a pip from pearl-clutching Westerners.

In 2016, a Belarusian plane was grounded by the US-backed government in Ukraine, 20 minutes after departure from Kiev. Ukrainian law enforcement proceeded to take into custody and search an Armenian reporter named Armen Martirosyan, who was highly critical of the Ukrainian government.

The SBU, Ukraine’s security service, said it was tipped off that a foreign citizen on board the aircraft posed a threat to national security. The man said SBU agents thought he was carrying a flash drive with some sensitive information, but released him after none was found.