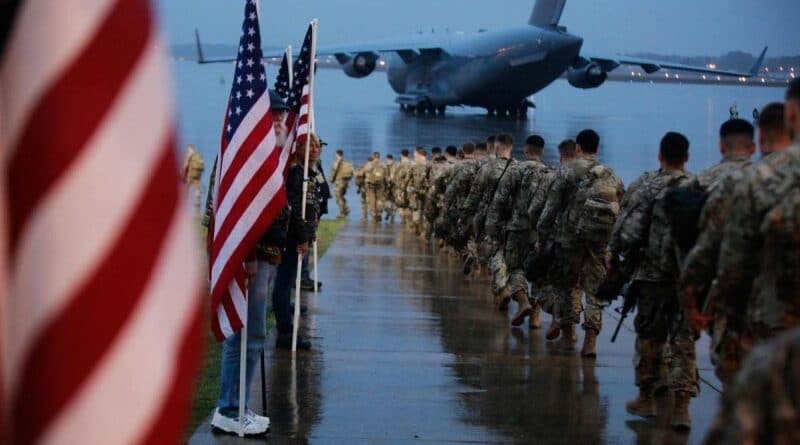 As much as Donald Trump’s 2016 presidential run was a nonstop parade of misogynist, xenophobic demagoguery, in a bizarre role reversal the campaign also seemed to represent more of a seismic shift in US foreign policy strategy than a Hillary Clinton-led government promised to (New York Times columnist Maureen Dowd famously framed the matchup as Donald the Dove vs Hillary the Hawk).

As ridiculous as this headline may seem today, Dowd was not an outlier. Many believed, perhaps correctly, that a Clinton presidency meant a transition into a more aggressive foreign policy than Barack Obama’s smart, pragmatic but still brutally violent imperialism. While it’s doubtful there’s anyone who actually thought Trump’s positions on national security and endless wars were rooted in any kind of principled moral stance, it still seemed that he had made a very simple calculation—since America’s never ending and costly foreign entanglements were deeply unpopular, campaigning against these things could generate significant appeal.

After all, Obama and the Democratic Party had campaigned against endless war and won huge victories in 2006 and 2008, leading to their control of the presidency and supermajorities in both houses of congress. But the reality of the Obama foreign policy project wound up being significantly different from what had been sold to voters during his run for president. Though US military involvement in Iraq wound down, the country and region were gripped by violent sectarian civil war. Afghanistan continued to descend into a nightmarish quagmire. Extrajudicial drone strikes increased exponentially in countries the US wasn’t even formally at war with like Yemen, Pakistan, Libya, and Somalia.

As much as Obama was successfully able to exude kindness, optimism and empathy during his famous speeches, this calculated image often clashed with the reality of some of the crimes he was overseeing as commander in chief, including the bombing of a Yemeni wedding party, the destruction of a Doctors Without Borders hospital in Afghanistan and the targeted assassination of American citizen Anwar Al-Alwaki that also claimed the life of his 16-year-old son, Abdulrahman.

It should be noted that Trump’s stance on foreign policy in 2016 was, at best, incoherent. While he did campaign against the Iraq War (despite originally supporting it) and condemned America’s neverending foreign entanglements, he also spoke approvingly about torturing state enemies and bombing the family members of ISIS militants. He also repeatedly told an exaggerated story about the mass execution of Muslim prisoners using bullets dipped in pig blood. It is therefore disingenuous to suggest that Trump was styling himself as some kind of isolationist, or even as a right wing anti-imperialist. But he was more willing to criticize the sacred cows of the American national security establishment than anyone campaigning for either party in recent memory, and there was a sense that, perhaps through some kind of cynical contrarianism, the foreign policy of a Trump administration could actually be less damaging than that of some of his predecessors.

This turned out to be false. The nature of what would become Trump’s erratic and dangerous foreign policy came within days of his inauguration, as a botched special forces raid in Yemen resulted in the deaths of multiple innocent civilians, a Navy SEAL, and in a tragic irony, the eight-year-old daughter of Anwar Al-Alwaki, Nawar. As the years progressed, Trump drastically increased the use of drone strikes, with even less regard for civilian casualties than Obama, who had infamously implemented a policy that retroactively designated any military-aged males in the vicinity of a lethal drone strike as an enemy combatant in order to deliberately exclude them from such statistics.

Trump reneged on the Iran Deal—really the only example of an Obama-era policy that successfully used diplomacy to non-violently wind down tensions in the region—then arbitrarily assassinated Islamic Revolutionary Guard Corps Major-General Khasim Soleimani, initiating a global crisis that could have very easily spiraled into a devastating military conflict.

Trump has also continued a long history of interference in Latin America, helping repeatedly to coordinate the attempted overthrow of Nicolas Maduro’s government in Venezuela. He even went as far as to appoint Elliott Abrams, the infamous Cold Warrior who helped cover up the El Mozote massacre in El Salvador, as a special advisor on the as-yet unsuccessful project.

And like every other president in living history, Trump continued uncritical support of Saudi Arabia and Israel as they carried out their own human rights atrocities in Yemen and Palestine. He also ballooned the US military budget to an astounding $738 billion (with, it should be noted, full bipartisan support).

America is now faced with an election in which ramping down this kind of out-of-control foreign policy is not even on the table. Bernie Sanders was the only candidate in the Democratic Party primary who campaigned on possibly de-escalating the country’s endless foreign entanglements. He pointed out the absurdity of spending countless trillions of dollars maintaining a decaying empire at the expense of valuable domestic social programs that could drastically improve the lives of everyday citizens.

Instead, the Democratic Party establishment sidelined Sanders and coalesced around former Vice President Joe Biden, who is currently giving every indication that he views Trump’s foreign policy as actually not going far enough. Despite always defaulting to the language of austerity when speaking about social programs or healthcare, Biden has signalled that he has no plans to slash any of the massive military budget that is set to exceed $7 trillion over the next decade.

On the contrary, in a recent phone interview he made clear that his advisors “have suggested in certain areas the budget is going to have to be increased.” Despite Trump’s Cold War posturing in Venezuela, Biden has claimed that the president has been too soft on the Maduro government, and top ranking Democrats like Senator Chris Murphy, a member of the Senate Committee on Foreign Relations, suggested a few months ago that Trump’s incompetence has prevented the coup from being more successful.

Biden has given no indication that the burgeoning ‘new Cold War’ with China (one that has drastically escalated under Trump) will be slowed down in any way. He has criticized Trump for his effort to non-violently de-escalate tensions with North Korea—probably the only positive foreign policy development of the Trump era. What’s more, throughout the Trump administration, American liberals have been agitating for increased hostilities with Russia based on their belief in a conspiracy theory about the president being a Kremlin sleeper agent. This ‘Russiagate’ hysteria was repeated breathlessly on cable news networks for years following Trump’s victory, until the actual investigation into this matter failed to turn up anything resembling actual evidence.

Nevertheless, a potential Biden presidency will almost certainly be pressured by various state and non-state actors to officially escalate these tensions. Throughout the Trump era the Democratic Party has been happy to welcome into the fold a murderer’s row of former intelligence community operatives and neo-conservative Bush-era Iraq War architects as long as they were critical of the president. If Biden is able to win this election, he will not be leading a party that has any interest in winding down what remains of the moribund American empire. Quite the opposite.

Where does all this leave Canada? It’s clear the US is going to continue to use its vast military machine to ruthlessly enforce a neoliberal world order that benefits their ruling class—a situation that the leaders of this country have been benefiting from for a very long time. As absurd as some of the Trump era foreign policy has been, Canada has been a willing participant throughout much of it, attempting to give a preposterous human rights sheen to the naked Venezuelan power grab through our partners in the Lima Group, to take just one example.

The Trudeau government has also indicated, by imprisoning Huawei executive Meng Wanzhou at the behest of the US State Department, that we intend to follow America’s lead in increasingly hostile tensions with China. Canada is still enthusiastically supporting the governments of Saudi Arabia and Israel as they violate international law on an almost daily basis, as our leaders have determined that’s what we must do in order to ensure the US-led world order remains intact.

It may have been politically advantageous to be chained to the US when the country was the unimpeachable global superpower that was leading the world into an untold era of prosperity at the ‘end of history.’ But now, a full two decades into the 21st century, the end of history turned out to be a mirage born from a post-Cold War hangover, and we now find ourselves still irrevocably attached to an empire very much in decline.

For decades Canada has been a junior partner in a US-led military and economic project that has prioritized the freedom of markets and multinational corporations over actual human beings, from Chile to Ukraine to Korea. But like all great dynasties before it, the American empire will eventually collapse. It would be prudent if Canada untethered itself from it before that happens.