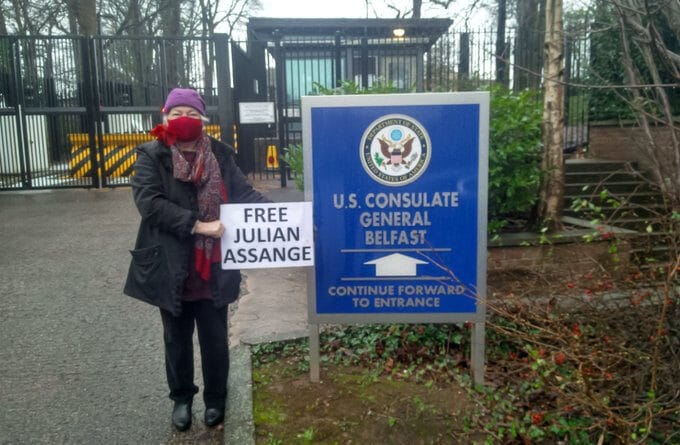 Mairead Corrigan Maguire submitted a letter to the American Consulate in Belfast on Tuesday, January 26, 2021.

In her communique, she encourages the new President of America, Mr Joe Biden, a Democrat, to free Julian Assange and help end the war on Yemen.

America stands accused of prolonging the conflict by continuing to supply arms to Saudi Arabia and its allies. The civilian population stands on the brink of mass starvation, mainly due to the economic sanctions placed on the country by Britain, America and the west.

A blockade of the ports and airports in Yemen was started in 2015 by Saudi Arabia and was joined by America in 2016. This embargo is deliberately preventing much-needed aid from being distributed to the people, to prevent further deaths from hunger, disease and starvation. Yemen needs to import up to 90% of its food supplies. With the continuing war and now the Covid 19 pandemic things are going from bad to worse, in a country that is in desperate need of medicine and food, not more bombs and genocidal famines.

To avert a humanitarian disaster, the war must be ended at once.

America has a role to play in that.

Mairead Corrigan Maguire is no stranger to the politics of activism. She won her 1976 Nobel Peace Prize in response to her peace and reconciliation efforts in trying to bring the conflict in Northern Ireland to an end. Through cross-community support, she tried to move Northern Irish society from war to peace.

All did not universally welcome her efforts, but with the signing of the Good Friday Agreement of April 10, 1998, the conflict here for some, ended, and time has proven her analysis that people wanted peace, to be correct.

Mairead was once arrested outside the United Nations building in New York while protesting the Iraq war and on a  second occasion for breaching security at the White House while attending another anti-war protest.

RELATED CONTENT: Verdict in Julian Assange’s Extradition Case to be Delivered on Monday

She has supported Chelsea Manning and campaigned for the Rohinga people in Myanmar, and protested the war in Afghanistan Libya and Syria.

A committed peace activist and grandmother, Mairead has been a strong vocal advocate for a free press and an ardent defender of whistleblowers to include Julian Assange.

Mairead Corrigan Maguire at the American Consulate BelfastShe said ‘Julian Assange is a truth-teller who on behalf of us all tried to tell us what was happening about the wars in Iraq and Afghanistan. He wrote the truth and he is being punished for truth-telling. He is old and grey-haired now, having spent 16 months in prison.

He is currently in jail having committed no crime so it is time he was freed and rejoined his family.

‘Julian is a publisher and a journalist. Governments are trying to silence journalists and truth-tellers. If Julian is extradited it will put at risk every journalist and everyone who speaks for human rights and who are against war.

We call for Julian’s release under freedom of conscience. We have to work to protect Julian. I believe in the power of people and I believe the truth will win through and Julian will gain his freedom.

He has two lovely young boys now and a new partner and we wish them all the very best. We are very grateful for what he has done.

We call on Biden and the American government to free Julian’.

Due to Covid 19 restrictions, only a few protestors were allowed to attend, symbolically representing thousands of others.

Here is the letter in full.

A letter from Nobel Laureate Mairead Maguire to President Biden. To address the following requests:

Please accept my congratulations and best wishes in your work as President.

I have two urgent requests to ask of you.

Please do all you can to free Julian Assange and release him to let him go home to his family.

He has served long enough and his family long for his presence and his punishment to be ended.

2) Save the Children of Yemen.

Your Foreign Policy is causing death and starvation of thousands of Yemeni children as the ports are blocked and people cannot get food.  Do not let history record again that powerful Governments played politics with little children’s lives. I implore you, Mr President, to stop immediately with the UK Government the war on Yemen.  Please end the arms sales to Saudi Arabia and make peace.

Sadly more and more Yemeni children are being starved by warring parties whose blockades and bomb attacks have and continue to decimate their country.

Please learn from Northern Ireland, and solve this horror of war on Yemen, through dialogue.