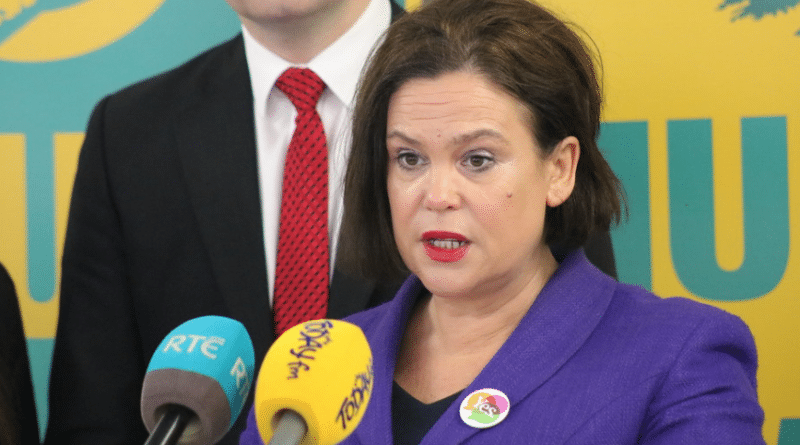 SINN Féin has promised to hold Ireland’s new government to account after narrowly missing out of power following a breakthrough election for progressives.

The left-wing republican party had emerged with the largest vote share following February’s general election but had not run enough candidates to take full advantage.

This meant long-running rivals Fianna Fáil and Fine Gael were able to join forces with the Green Party in a historic coalition deal and keep the left from power.

Though disheartened by the failure of Sinn Fein to form a government, some have welcomed the emergence of a clear left-right divide in Irish politics.

Mary Lou McDonald’s party are still in a position of strength and, as the main force of opposition in the Dail, now offer a clear alternative to the old neoliberal order.

Redaction Politics spoke with Damien Thomson, a political advisor for the European United Left (GUE/NGL) in the European Parliament, and Contributing editor at Irish Broad Left to get his thoughts on where the Irish left can go from here.

What has the impact been of the coalition formation on the left in general, after what was viewed from the outside as a breakthrough election for progressive parties?

There’s no doubt that the new coalition is a major disappointment for the left in general.

After an historic election, it’s quite normal to feel shafted, with the same two parties getting back into power.

RELATED CONTENT: Dissecting Ireland’s February 2020 General Election and the State of the Nation

We do have, however, for the first time, an actual left-right divide in parliamentary politics, in relation to the government and the opposition.

The faux-opposition leaders we’ve had, not just for the last government, but for decades, has been a major contributor to people’s disillusionment with parliamentary politics.

They’re all the same. Men in suits saying the same things and snapping at each other only over the silliest of details.

The new government, and very importantly, Irish establishment media, will now be forced to engage in what will be a repoliticisation of parliamentary politics.

The leader of the opposition will now be Mary Lou McDonald, a socialist, republican woman, facing the two-headed, right-wing, rotating Taoisigh.

So the left, while momentarily disappointed, is in a good place to bring its politics forward and outwards, to mobilise people, and to expose Fine Gael and Fianna Fáil for what they are – the same thing.

How do you think the coalition will handle the post-pandemic economy recovery and how can the left respond?

The post-pandemic economic recovery is a gift wrapped in ribbon for the Fine Gael-Fianna Fáil-led government.

It’s a justification for them to limit spending and to implement their conservative economic policies, which benefit the few in society.

It’s also an opportunity for them to bring neoliberalism into fourth gear – there have been so many concerted attempts to deregulate, “to create enabling environments”, and reactionary attempts to slow down change.

We see this with how Fine Gael’s group called for the postponement of the EU’s sustainable food strategy, citing the economic recovery as a reason to not “burden” farmers.

It’s particularly a gift for Fine Gael and Fianna Fáil as it will allow them to pursue their greenwashed “climate” agenda rather than undertake a transformative and comprehensive ecological transition.

We all know that a Green New Deal is more than just an increased cycle lane budget. It’s about regulation, economics and justice.

The economics of the Green New Deal is particularly important and this is where the recovery gives Fine Gael and Fianna Fáil their lifeline for staying true to their conservative politics.

What we will get is lots of seed funding for private enterprise, for the market to come up with solutions.

We’ll get a rake of consumption taxes and green taxes, packaged as climate action while discriminating against the working class.

We’ll come out of this recovery angrily, and certainly more as a more divided and unequal society.

Are we seeing a long term revival of Fianna Fail or is a Sinn Fein led broad left coalition on the horizon?

One thing is certain: Fianna Fáil has no future.

Looking at the demographics and results for the civil war parties at the last election, both are on life support thanks to older generations.

It is hard to see how they could ever get a new breath of life. Most people I know recoil a the thoughts of Michael Martin being elected Taoiseach.

With only 2.5 years to prove himself and has shown no commitment to any new form of politics.

I can say with certainty that he will not be regarded by younger generations as the Taoiseach of change.

Fianna Fáil are in freefall for good reason. They represent the worst of politics – stale, parochial, clientelist and conservative.

They’ll be clawing their way back, but I don’t see any consolidation of the seats they barely got their hands on.

Young people today know what life is like in other countries – we see transport services that are affordable and efficient, national health systems, third-level tuition that doesn’t saddle you with debt, people buying homes.

We know that the reason we don’t have these opportunities in Ireland isn’t because of some national exception, it’s political decision-making that got us here.

Sinn Féin as leaders of the opposition, are putting forward policies of actual change, policies that benefit all in society, and it’s no wonder Sinn Féin has huge support in younger age brackets.

This last election showed that a left coalition, and a rupture of the Fine Gael-Fianna Fáil hegemony, is very much a possibility, and so I don’t see the electorate ordering the same again at the next election.

With the Green Party joining the coalition as a junior party, where does environmental activism go from here considering the damage austerity did to the Green Party brand?

There are two ways this could go – we could have massive disillusionment with environmental parliamentary politics, and a conflation of the general public’s understandings of climate action and austerity, i.e. a backlash.

But, more positively, we could also finally see an understanding emerge, that properly delineates climate and environmental justice demands from greenwashed business-as-usual (which this government will represent).

I think this could be a big player in terms of awareness around how neoliberalism works and how meaningful climate action requires a departure from the politics of neoliberalism.

Environmental activists are already organising, not just in terms of preparing to “hold this government to account”, but actually exposing how this government is fundamentally incapable of undertaking a just, ecological transition.

A truly transformative environmental agenda is being shaped in the opposition and by environmental activists, and the new government is a benchmark of how not to do things.

The programme for government was a woolly and shallow document.

It takes a certain amount of audacity for them to use the words Green New Deal in the document while keeping the exact same economic policies in place (and even the same Finance Minister!).

It just goes to show how the GND can be easily appropriated. But it doesn’t void these words of meaning just yet at least, although the clock is ticking.

Environmental activists need to immediately organise and take back ownership of these words and the climate agenda, which as we know must be embedded in a broader agenda of social justice.

The election made it clear that the Green Party, at least under the current leadership, is not a vehicle for change or for activists to even express themselves.

We’ve seen a horrendous backlash against the progressive Greens who advocated a no vote for the programme for government.

It’s time now to work as the broad left in opposition, cross-party, as environmental and social justice activists and bring forward the vision and policies that will actually make a difference.

Damien is the host of the I4C Trouble podcast with MEPs Clare Daly and Mick Wallace.
He is also is the primary operator of the Irish Broad Left Twitter account, @irishbroadleft.

Tim McNulty is a journalist and Editor of Redaction Politics. He has also written for The Olive Press in Spain and a number of Scottish titles. Follow Tim on Twitter @mcn_ulty View all posts by Tim McNulty