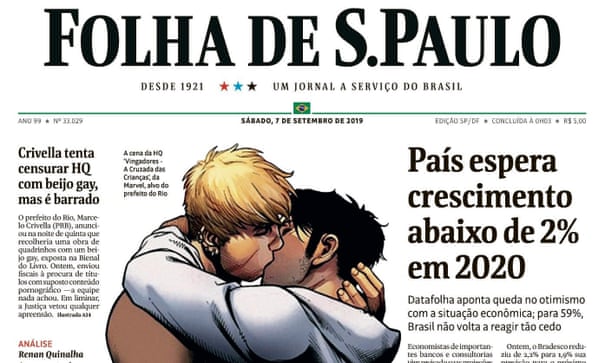 Marcelo Crivella, mayor of Rio de Janeiro, Brazil, ordered the withdrawal of all copies of the Marvel comic “The Avengers: The Crusade of Children”, drawing a wide variety of reactions: from policemen traveling the Biennial to collect all the books on homosexuality, a Youtuber who bought all the publications on the subject to give away, and an opinion of the Supreme Court protecting the publication.

Who would say Bolsonaro officials are homophobic? This was demonstrated after the mayor of Rio de Janeiro, Brazil, completely censored a Marvel comic. We speak of “The Avengers: The crusade of children.” The reason was a homosexual kiss.

The 264-page story shows in one of its internal pages two male characters who are dating, which led the evangelical Crivella to denounce that the publication had “sexual content for minors” and order it to stop being exhibited to “protect to the minors of the city”.

For Marvel “love is love” , but in Brazil they don’t want to know anything about it.
Marcelo Crivella is the mayor in question. After it was known that in a comic two characters of the same sex were kissing, he ordered all copies removed from the Book Biennial, which took place from August 30 to September 8.

The news was published through a video on Twitter. “We need to protect our children,” Crivella tweeted. “Therefore, we have asked the organizers of the Biennial to collect books with content that is not suitable for minors. It is not correct that they have early access to topics that do not comport with their ages.

He point this out in order to “protect the integrity of minors,” because one can deal with that, but does anyone want to think about the kids? On Friday, the Undersecretary of Public Order of the municipality of Rio de Janeiro, the Colonel of the Military Police Wolney Dias, appeared next to a group of inspectors at the exhibition center that houses the Biennial of the Book, a traditional event at the city, to enforce the mayor’s order.

Deployed by the fair, the inspectors explained that they were there to verify compliance with the order not to display the book questioned by the mayor and verify if other publications not suitable for minors were being sold.

“It is not censorship. We are complying with a recommendation from the Public Ministry of the Municipality,” said Dias, quoted by Folha de Sao Paulo. This is the first time that an operation of this type is carried out in the history of the biennial, which has been organized for 38 years.

Despite this, the comic sold out at the Biennial. In addition, the newspaper Folha De S. Paulo, one of the largest in Brazil, published on the front page the comic with the two heroes kissing. Once again good triumphed, they published. On the other hand, one of the most famous youtubers in Brazil, Felipe Neto, 31, with 34 million subscribers on his channel, announced that he had bought all the books on homosexuality, transsexuality, bisexuality, intersexuality … for sale in one of the biggest cultural book fairs in Brazil.

And he used the books to hit Mayor Crivella back: He announced that he had bought all the stock of LGTB + books from the fair’s publishers because “love is not pornography.”

And he summoned his followers to go to the fair on Saturday because he was going to give away the 14,000 books. Thousands of teenagers came. Each of them could take one without knowing what title it was because they were all wrapped in black plastic with the following notice: “Unfit for backward, retrograde and prejudiced people.” The act was a powerful gesture against censorship and homophobia. And the youtuber, who lives in a mansion with his brother and has a company that manages a multitude of YouTube channels, became the most unexpected hero of a battle for freedoms that was also fought in more classical spheres.

The publishers refused to withdraw even one of the displayed titles before the matter reached the courts. Several instances have ruled, sometimes with contradictory decisions, until Sunday the Supreme Court made it clear: it is forbidden to censor the comic. Published years ago, the comic has become very famous.