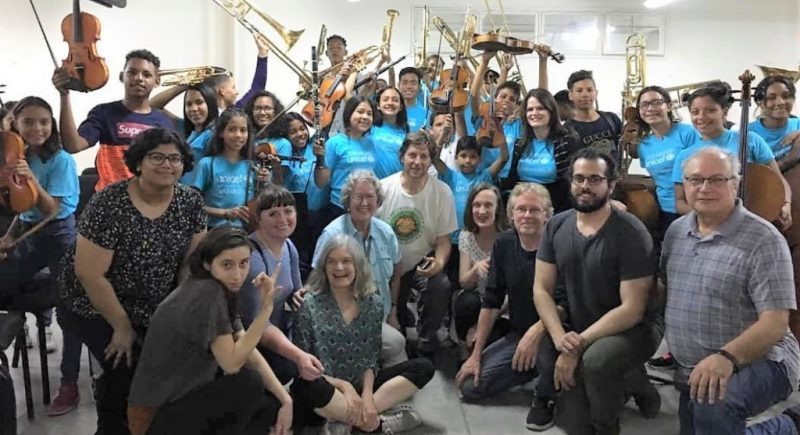 Eyewitness Venezuela – U.S./Canada Delegation to Venezuela Returns After Fact-finding Mission to Study the Impact of Sanctions.

From March 28-April 7, 2019 people from the U.S., Canada and Turkey were in Venezuela to observe and better understand the affects of sanctions on Venezuela’s economy, it’s people and institutions. The 12 participants represented many different backgrounds, experiences and geographic areas across the U.S., Canada, Costa Rica and Turkey.

This delegation, which was entirely self-funded, went to Venezuela at a critical time, following the defeat of the U.S.-backed attempted coup d’état by Juan Guaido. While the delegation was in Venezuela, the U.S. government continued to escalate sanctions against Venezuela, and to state that, “all options are on the table,” referring to possible U.S. military action against the sovereign country.

What the delegation observed was that the economic sanctions, referred to as unilateral coercive economic measures in Venezuela, which illegal under the Organization of American States (OAS) and the United Nations (UN) charters, as well as the U.S. threats of war, have had a significant negative impact on the everyday lives of people in Venezuela.

“We saw a very different Venezuela than what we are hearing, seeing and reading across mainstream media. We were eye-witness to the significant difficulties that Venezuela is facing due to the illegal U.S., Canada and European Union sanctions, but also to the many ways that the government and people of Venezuela are adapting and continuing to defend their sovereignty and self-determination,” said delegation organizer Teri Mattson.

“The people in Venezuela that we met with and what we observed first-hand re-affirmed our responsibility as people living in North America to work to end war on Venezuela, end all sanctions, and call on the governments of the U.S. and Canada to respect the sovereignty of Venezuela,” Mattson continued.

Participants in the delegation, who are located throughout the U.S., Canada, Turkey and Costa Rica are available for interviews and speaking engagements. Please contact endvenezuelasanctions@gmail.com with any inquiries.