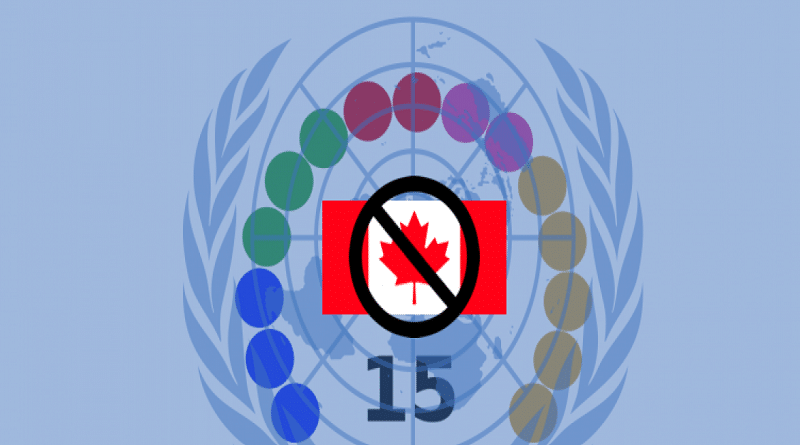 Canada is promoting its candidacy for the “Western European and Others Group” in competition with Ireland and Norway. But many Canadians strongly reject the candidacy because they believe that the government of Justin Trudeau has gained a negative reputation for its warmongering foreign policy. On the international stage, Canada has also lost its traditional peacekeeping image.

Next June, the United Nations Assembly will hold elections at its 74th session for five non-permanent seats on the UN Security Council (UNSC) starting on January 1, 2021, for the period 2021–22.

The UNSC has 15 members, five of which are permanent veto-wielding members: U.S., Great Britain, France, Russia and China. The remaining ten seats are elected for a two-year term in five seats at a time every year according to internal rotating rules. There are five geopolitical regions where the world countries are fitted into: African Group, Asian & Pacific Group, Western European & Others Group, Eastern European Group, and Latin American & Caribbean Group.

Canada is promoting its candidacy for the “Western European and Others Group” in competition with Ireland and Norway. But many Canadians strongly reject the candidacy because they believe that the government of Justin Trudeau has gained a negative reputation for its warmongering foreign policy. On the international stage, Canada has also lost its traditional peacekeeping image.

Canada has been on the UNSC six times, which is approximately once every ten years. In 2010, the Conservative Harper government withdrew its candidacy for fear of not getting the sufficient number of votes required.

A newly elected Prime Minister Justin Trudeau announced his bid for a seat in 2021 as far back as 2016 on a platform of “bringing people together”, a renewed “peacekeeping” role in the world, respect for human rights, and a commitment to tackling climate change.

Following what’s widely considered to be a disappointing performance on those issues, Canadians may have at first welcomed hopeful promises by the new Liberal government. But, alas, four years later, those and other government policies are questioned to the point of considering Canada unfit to have a seat at the UNSC.

A recent article in the Canadian media outlet “The Star” raises the question “Does Canada deserve a UNSC seat?” Arguments are presented to make the case for the “Yes” and the “No” sides. In the poll embedded in the media, at the time of writing, about three quarters of respondents voted “No. Canada has failed on too many fronts, from human rights to climate.” This is not a scientific survey, but The Star is a daily of wide circulation and considered a mainstream outlet.

Ottawa’s full platform for its bid as a candidate at the UNSC can be seen on the Foreign Relations website. Prime Minister Trudeau is quoted saying, “Canada is committed to working with partners around the world to build a better future for all of us – from growing economies that benefit everyone, to fighting climate change, to creating a safer, more peaceful world. That’s the kind of progress we make when we work together.”

A petition launched by the Canadian Foreign Policy Institute, a non-partisan organization that “seeks to bridge the gap between government policy and public perception,” is titled “Canada does not deserve a seat on the UNSC” and states, “Despite its peaceful reputation, Canada is not acting as a benevolent player on the international stage.” Details are listed. Among others, Canada is portrayed as a large exporter of weapons to conflict zones and countries that allegedly violate human rights, like Saudi Arabia. As well as having refused to join 122 countries represented at the 2017 UN “Conference to Negotiate a Legally Binding Instrument to Prohibit Nuclear Weapons,” in the region, the Trudeau government has led efforts to unseat Venezuela’s UN-recognized government, while propping up repressive, corrupt and illegitimate governments in Haiti and Honduras.

The petition has been signed by a large number of Canadian and international personalities including Nobel Peace Prize winners Setsuko Thurlow and Mairead Maguire, and will be delivered to UN member states prior to the vote for the UNSC seat in June with this final call: “The international community should not reward bad behaviour. Please vote against Canada’s bid for a seat on the UNSC.”

How much the Canadian request will influence the decision on the vote is uncertain. Ultimately, the final decision will be made by the individual countries’ ambassadors to the UN according to all political and geostrategic considerations.

Canada, Ireland, and Norway are bidding for two seats at the UNSC, which will leave one of them out. Which one that will be is hard to tell. But here are some pointers by group.

This is the largest group with 54 member states. In general terms, Canada has increased its international visibility thanks to former Foreign Minister Chrystia Freeland’s presence in international affairs, albeit not always in a positive way. Justin Trudeau traveled to Africa earlier this year to attend the African Union meeting, but this may be seen as an opportunistic move to garner votes for the UNSC considering that Canada missed the 2019 meeting. The founding of the African Union is attributed to Muammar al-Gaddafi.

Ireland, in turn, seems to be developing a new relationship with Africa with its “Global Ireland 2025” plan promising “to advance shared values and to ensure priority for African issues at the United Nations.” At the same time, Norway’s relationship with Africa is deepening, with Norwegian trade with African countries on the rise. Oslo has also recently established a permanent mission to the African Union.

Given that Washington has slammed the BRI, and taking into account the fact that Ottawa is politically and ideologically close the Washington, most of the African countries may deny a vote to Canada.

For the second largest region with 53 States, the Asian & Pacific Group, any prediction of their pick among the three countries under consideration is quite complex. China is by far the largest country with a permanent seat on the UNSC and therefore weighs some influence on the other countries, which is also thanks to the promotion of the BRI. However, the geopolitical spread is quite large in this group. There are countries like India (also seeking a seat at the UNSC), Japan, South Korea, and Saudi Arabia who would welcome Canada, and then countries like the Democratic People’s Republic of Korea, Iran, Iraq, the State of Palestine, and the Syrian Arab Republic who may not be as receptive to the presence of Canada on the Council. It is particularly exemplary to cite the reportedly appalling Canadian record on Palestine, and the lack of diplomatic relations with Iran.

A similar level of complexity is present in the Western European & Others Group. This group of 28 nations is quite diverse, including not only Canada but also Australia and Israel. The United States of America is not formally a member of any group, but attends meetings of this group as an observer and is considered to be a member of the group for electoral purposes. The two NATO members, Canada and Norway, may be their favorite choice. However, the mediation efforts by Norway aimed at resolving Venezuela’s political crisis might not go unnoticed as an obstacle.

The Eastern European Group, with the smallest number of 23 nations, is dominated by another permanent member, the Russian Federation. Several are former Soviet states and have since become members of the European Union, but, more importantly, some have become NATO members. If the loyalty to the NATO membership is “required” in casting the UNSC vote, then Canada and Norway may again be the winning choices within this group.

The last region to be considered is the Latin American & Caribbean Group of 33 nations. This is a group that is more compact geographically and mostly more uniform historically and culturally. However, the undue influence of the U.S., and more recently Canada, has created deep political divisions and regional instability. The persistent push for unconstitutional regime change that succeeded in Bolivia, and escalates in Venezuela, has polarised the region. Canada’s involvement has managed to split the region by helping create the so-called Lima Group of a dozen nations in 2017 with a single mandate to overthrow the legitimate Maduro government in Venezuela.

It is quite conceivable that the vote involving Canada will coincide with the nations’ political stand around Venezuela. If that is the case, many members of this regional group may not give Canada their vote and would rather vote for Norway and Ireland who have a different position vis-à-vis Venezuela within the EU. After all, Norway made a positive attempt to mediate in the internal crisis, and Ireland maintains that the crisis must be resolved by Venezuelans and has taken the UN position that recognises states, not governments.

Refusing to vote for Canada may also be a way to stand up against U.S. intervention in the region.

It is a futile task attempting to foresee the outcome of a vote at the UNSC. The previous sketch is not a pretension to achieve such a prediction. There are too many players and a very fluid political situation that can change daily until election day. There are also many more issues and important factors that individual States will consider at the time of casting their vote in June besides the very few mentioned above. For instance, at the time of writing, Iranian tankers attempt to deliver much-needed fuel to Venezuela. The Iranian government promises to retaliate if the U.S. government follows through with its threat to forcefully stop the delivery. A much larger conflict is brewing that surely will not escape the attention of the voting countries: the escalating U.S. information warfare on China. Those and other facts will entrench some of the positions of the voters at the UN. Some may agree with many Canadians: “The international community should not reward bad behaviour.”