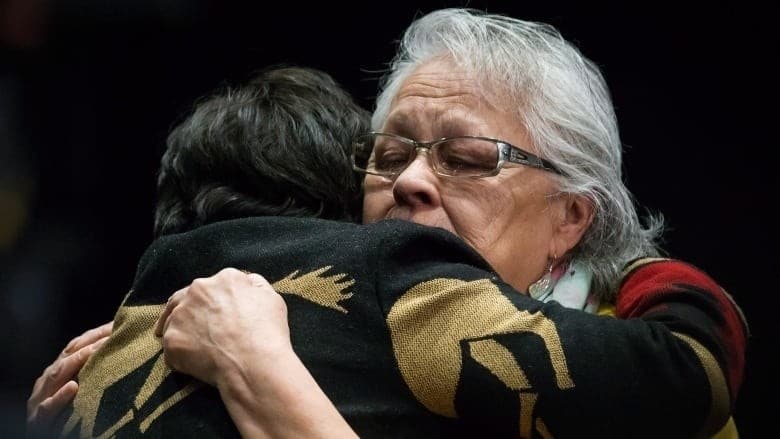 Report is the culmination of the $92M national inquiry into murdered and missing Indigenous women and girls.

The thousands of Indigenous women and girls who were murdered or disappeared across the country in recent decades are victims of a “Canadian genocide,” says the final report of the national inquiry created to probe the ongoing tragedy.

The report, obtained by CBC News and verified by sources, concludes that a genocide driven by the disproportionate level of violence faced by Indigenous women and girls occurred in Canada through “state actions and inactions rooted in colonialism and colonial ideologies.”

“We do know that thousands of Indigenous women, girls and 2SLGBTQQIA (two-spirit, lesbian, gay, bisexual, transgender, queer, questioning, intersex and asexual) have been lost to the Canadian genocide to date,” said the report, titled Reclaiming Power and Place.

“The fact that First Nations, Inuit, and Métis peoples are still here and that the population is growing should not discount the charge of genocide.”

The report states that “due to the gravity of this issue,” the inquiry is preparing a “supplementary report on the Canadian genocide of Indigenous peoples according to the legal definition of genocide,” which will be posted at a later date on the inquiry website.

The inquiry’s report acknowledges that there are disagreements over what constitutes genocide and whether it could relate to Canada. The report cites research on genocide dating back to 1973, along with the findings of the Truth and Reconciliation Commission — which in 2015 released a report on Indian residential schools — and writings by Indigenous scholars as part of the evidence supporting its conclusions.

It also cites an opinion column published in 2013 in The Globe and Mail by former Assembly of First Nations national chief Phil Fontaine and Bernie Farber, the former chief executive officer of the Canadian Jewish Congress, arguing that Canada committed genocide against Indigenous peoples.

“Genocide is the sum of the social practices, assumptions, and actions detailed within this report,” the report says. “The national inquiry’s findings support characterizing these acts, including violence against Indigenous women, girls, and 2SLGBTQQIA people, as genocide.”

The report runs to over 1,200 pages and includes more than 230 recommendations. It’s being released at a ceremony Monday at the Museum of History in Gatineau, Que. Prime Minister Justin Trudeau and cabinet ministers, Indigenous leaders and family members of missing and murdered Indigenous women and girls are expected to attend.

The report is the culmination of two-and-a-half years of work by the $92 million National Inquiry into Murdered and Missing Indigenous Women and Girls, which was beset by a number of setbacks throughout its operations, including the loss of a commissioner and two executive directors and a high staff turnover.

The inquiry originally was supposed to submit its final report by Nov. 1, 2018, and to wrap up by Dec. 31. The inquiry commissioners asked Ottawa in March 2018 for an additional $50 million and a 24-month extension. Crown-Indigenous Relations Minister Carolyn Bennett rejected the request and instead granted a six-month extension.

The inquiry has held 24 hearings and events to gather statements across Canada since 2017. Those events were attended by more than 2,380 Canadians, including family members of missing and murdered women and girls, survivors of violence, Indigenous knowledge keepers, experts and officials.

The inquiry issued a statement today saying that it was “aware that an unauthorized document, purported to be the National Inquiry’s final report” had been obtained by the media, but that it wouldn’t comment on the reported findings.

“Out of respect for all those invested in the process, and most particularly the family members and survivors of violence who courageously shared their Truths over two years of public hearings and statement gatherings, the National Inquiry will proceed as planned to present its Final Report on Monday, June 3 at a solemn national ceremony to honour the missing and murdered,” said the statement.

“We will not discuss specific findings or recommendations in advance of their official publication, and continue to encourage all Canadians to read the Final Report following its formal presentation to governments.”

“Out of respect for the independent National Inquiry and the families, we won’t comment on the details of the final report before then,” says the statement.

“After decades of demanding a national inquiry into missing and murdered Indigenous women and girls, families are finally getting the answers they have been looking for.”

The statement cited residential schools, the Sixties Scoop, forced sterilization and the “massive apprehensions” of Indigenous children by the child welfare system as examples of this “assault.”

“The violence and homicide against Indigenous women and girls is part of this pattern and governments need to work urgently with Indigenous people to stop it,” said the statement.

The report urges the federal, provincial and territorial governments to develop an action plan to counter violence against Indigenous women and girls and 2SLGBTQQIA.

It also calls on the federal and provincial governments to give Indigenous languages official status on par with French and English, and for Ottawa to create “an independent mechanism” to report on the implementation of the report’s recommendations before Parliament.

The recommendations include a call to change the Criminal Code to treat cases of homicides involving intimate partner violence as first-degree murder, and for a review of the use of the ‘Gladue principle’ in cases involving the deaths of Indigenous women and girls.

The Supreme Court of Canada’s 1999 Gladue ruling says judges must take into consideration the historical and cultural context of Indigenous offenders — particularly the effect of factors such as residential schools or the child welfare system — when sentencing Indigenous offenders. Gladue principles are also part of the Criminal Code.

The report also calls on Canadians themselves to take action — to denounce violence and racism against Indigenous women and girls and 2SLGBTQQIA, learn the true history of the Indigenous experience in Canada and fully read the inquiry’s report.

How many have died?

Some estimates have suggested roughly 4,000 Indigenous women have been murdered or have disappeared over the past few decades.

The inquiry report said the true number may be impossible to establish.

“There is still not a complete understanding of the numbers of missing and murdered Indigenous women, girls, and 2SLGBTQQIA people,” said the report.

The inquiry issued subpoenas to 28 police agencies across Canada seeking 479 files, but only obtained 174 due to time constraints, the age of the files, missing information or agencies refusing to turn over the documents, according to the report.

The inquiry’s Forensic Document Review Project, which involved two teams probing police and institutional files, dissected two reports by the RCMP related to statistics on missing and murdered Indigenous women and girls, according to the report.

The panel took particular aim at a statistic that claimed Indigenous men were responsible for 70 per cent of the murders of Indigenous women and girls — a figure that was promoted by Stephen Harper-era Aboriginal Affairs minister Bernard Valcourt in 2014 and backed by the RCMP’s own research.

While the report said there was an “overall willingness” on the part of municipal and regional police forces to cooperate with the inquiry, it was a different story with the RCMP.

“Most, if not all, of the police forces devoted extra resources and personnel to the task of complying with subpoenas,” said the report. “By contrast, the RCMP demonstrated reluctance to provide … the information requested.”

The report said the inquiry requested 298 case files from the RCMP through three subpoenas, but only received 107.

The inquiry and the RCMP are still battling in Federal Court over access to two files — one involving a decades-old missing persons case and another involving a homicide. A publication ban prevents publication of details in both cases.

The RCMP told the Federal Court it has now handed over 119 “investigative cases” to the inquiry.

The report said that the RCMP is responsible for policing about 40 per cent of the Indigenous population and 39 per cent of unsolved cases are within the Mounties’ jurisdiction.

“The degree to which the RCMP, represented by the Department of Justice, resisted disclosure of the files sought … created a challenge to (the forensic review teams’) ability to obtain and review the necessary documents,” said the report.

“Many of the files received contained redactions that rendered some documents unintelligible.”