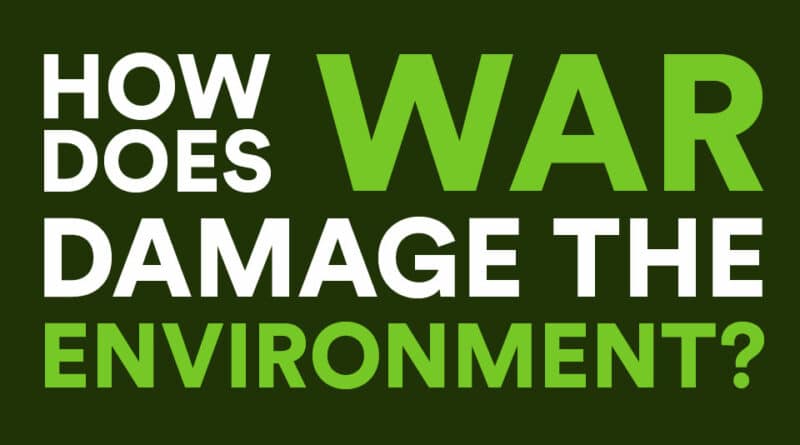 The forest fires, torrential floods and other extreme weather events wreaking havoc around the world are a cry from Mother Earth to take bold action. It’s time for environmentalists to directly challenge militarism, which is inherently anti-ecological and divides the world into good guys and bad guys at a time when we need international cooperation to mitigate the climate crisis.

From decimating animal life to releasing substantial greenhouse gases (GHGs) into the atmosphere, Canada’s armed forces have an immense ecological footprint. They’ve littered the landscape with tens of millions of bullets and shells as well as polluted dozens of lakes with ordnance. They continue to employ animals in experiments and during warfare.

Military vehicles, planes, warships, etc. consume vast quantities of fossil fuels. In fact, the Department of National Defence (DND) is far and away the largest emitter of GHGs in the federal government. DND represented 59% of federal government GHGs in 2019–20. Incredibly, however, the armed forces’ emissions are exempt from current national reduction targets, which is why DND’s GHGs have increased.

Now, the government is planning to spend hundreds of billions of dollars on new fossil fuel powered weaponry, which is incompatible with Canada’s commitment to reach net zero emissions by 2050. The government is expecting to spend $82 billion on 15 new petroleum powered warships, which dump waste in the ocean, disrupt sea life and often spill oil. The full life-cycle cost of the surface combatants is expected to reach a mind-boggling $286 billion partly due to their advanced weapons systems capable of decimating ecosystems.

Concurrently, the military plans to purchase 88 new carbon-intensive fighter jets for $19 billion ($77 billion over their lifecycle). While mostly consumed in training, Canadian jets burnt 14.5 million pounds of fuel during the 2011 bombing of Libya. In that war NATO jets also destroyed natural habitat and killed many camels.

As the federal government proclaims its commitment to reach net-zero in less than 30 years, its two most costly ever procurements will entrench fossil fuel militarism into the next half of the century. The resources plowed into the fighter jets and surface combatants could turbocharge a just transition away from fossil fuels. Why not use these resources to build light rail lines in every major centre or a million units of car free public housing?

Purchasing new surface combatants and warplanes diverts resources required for a just transition towards fossil fuel militarism. But it’s indirect ecological toll may be even worse. New fighter jets and naval vessels are an investment in an ideology we must jettison to overcome the climate crisis.

RELATED CONTENT: The US Empire Wants to Make Climate-Induced Collapse of Civilization Inevitable

Militarism stokes division and is intimately tied to nation state competition, which undercuts the international cooperation required to mitigate climate chaos (not to mention the pandemic and other ecological crises). Environmentalists’ battle is not with the Russians or Chinese it’s with the polluters, which include those purportedly protecting us from the Russians and Chinese. An armada and cutting-edge fighter jets can’t stop ever more ferocious heat waves, forest fires and torrential floods.

For real security, we need to embrace the spirit of internationalism — a force that joins us across borders in common defence of people and planet.

Of course it’s hard to speak truth to the power of militarism, but it’s critically important we do so.