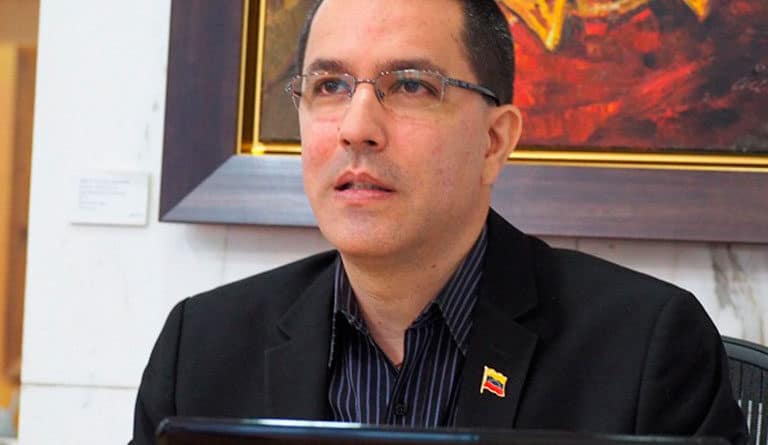 Venezuelan Foreign Minister, Jorge Arreaza, participated this Wednesday in a webinar organized by the International University of Communications, where he explained the different facets of the imperialist aggression carried out by the United States against Venezuela, reported a press release from the Venezuelan Ministry of Foreign Affairs.

He pointed out that the United States’ aggression has different spheres and objectives, one of them is to break the morale of the Venezuelan people and regain political and economic control of the country.

“It is not just a State, it is a scaffolding of corporations, of private interests, which has political expressions. It is a war in some sublime ways, subliminal and direct in other cases; it is a multidimensional and multiform attack,” he said.

On the political side, he explained that exercising the isolation of Venezuela has been tried through diplomatic measures in organizations such as the OAS, with the rupture of bilateral relations, and with pronouncements of grouped governments.

He explained that the idea of these countries is to show that Venezuela is a country that must be judged in a particular setting because it supposedly goes against the current.

In that particular context, he warned, the communicational attack begins to justify political reasons with a narrative.

“It is public opinion that does the work in this case, the accusation of alleged violation of human rights begins, the idea of the ‘narco-state’, and the persecution of officials of the Venezuelan government, which damage the reputation of the country.”

He also explained that they have designed a legal framework, since Barack Obama’s executive order for the implementation of unilateral coercive measures; “It is an economic work, and it is unilateral because it is promoted by a single actor, different from those applied by the UN Security Council in other historical moments, which are collective (and legal).”

“The object of the unilateral coercive measures is the pain, the suffering of the people, making life difficult and finally, the change by force of a government,” he added.

However, he exalted the resistance of the Venezuelan people, who, even with blocked funds and persecuted shipping companies, remain standing; and he recommended maintaining clarity, historical awareness, strength and morale in the face of aggression.

“Here is a conscious people, we have to continue fighting, it is the same independence process of two hundred years ago. We must achieve integral independence so as not to depend on any economic group or empire.”