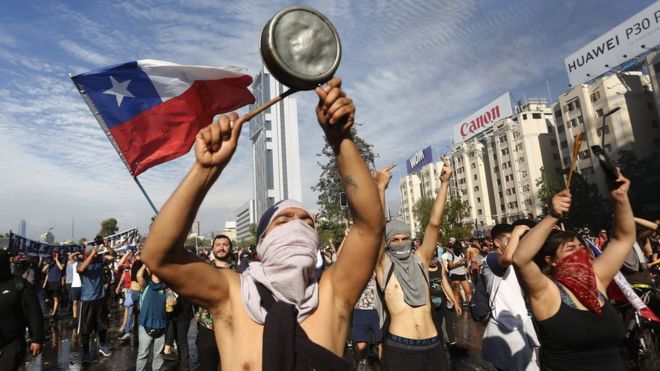 Sebastián Piñera’s statement has been posted over and over again on social networks during the last week. “In the midst of this troubled Latin America, let’s look at Chile: our country is a true oasis with a stable democracy,” he said last October 8 in Mega’s “Mucho Gusto” TV show.

As a result of the growing social conflict in the countries of the region governed by the right, Piñera seemed to throw away his aspiration to become the leader of neoliberalism in Latin America, the same one that until recently he characterized as the only actor with the capacity to produce growth and well-being. “Look at what happens in Latin America,” said Piñera and mentioned, among others, the cases of Argentina, Paraguay, Brazil, Peru and Colombia. The difference was the neoliberal oasis of Chile.

But Marx had already pointed out: “Everything solid vanishes in the air (…) and men, finally, are forced to calmly consider their conditions of existence and reciprocal relations.”

The Spanish newspaper “El País” rightly titled a chronicle about the emergence of the social revolt in the country with the following title: “The pressure cooker bursts in the Chilean oasis”. Its content: “Chile was apparently an oasis within a convulsive Latin America, as President Sebastián Piñera said a few weeks ago. But between Thursday and Friday a kind of pressure cooker exploded with violent social protests that this Saturday have the capital under military control, as has not happened since the dictatorship. ”

On the reasons for the social outbreak, they mentioned an image that circulated on social networks as an explanatory example: “As the tip of the iceberg – it is shown – there are protests over the rise in the Metro fare, which began last week with tickets mass of young people skipping Metro access without paying. But, according to the drawing, there is a deep part of the iceberg that cannot be seen. ” Among them, it mentions facts such as “unworthy pensions”, “precarious health” and “miserable salaries”, which has ended up generating “a tiredness that neither this government nor the previous ones have managed to appease”.

Shortly before Piñera’s statements about the “oasis,” former Uruguayan President Pepe Mujica said at an event of his country’s presidential campaign: “We don’t want to be a country like Chile (…) I wish Chile could share one of these days like we share in Uruguay.” It was a reaction against the Uruguayan right, which placed Chile as a model.

Next, some notes – written in the heat of the mobilizations and only in a first approximation – in which four keys are proposed to understand the phenomenon of inequality, which is at the base of the emergence of a Chile that woke up.

1.-Chile’s deep inequality
Economic growth is concentrated in very small segments of the population. Together with Mexico, Chile is the most unequal country in the OECD. The richest 1 percent of the population accounts for 33 percent of global income. By way of comparison, in Holland that 1 percent takes six, and in the United States, the most unequal country in the high-income capitalist world, the richest 1 takes 19.

At the end of November 2015, the OECD Economic Survey was presented including its latest report on income distribution, where Chile leads the ranking of the most unequal with a Gini index of 0.503. The study indicates that the richest 10% earn 26.5 more than the poorest 10%, exceeding the average of the countries in the international organization by more than 100%.

According to the latest edition of the “Social Panorama of Latin America” Report, prepared by the Economic Commission for Latin America and the Caribbean (ECLAC), the wealthiest 1% of the country kept 26.5% of the wealth in 2017, while 50% of lower income households accessed only 2.1% of the country’s net wealth.

A 2017 SOL Foundation study, based on official data from the Socioeconomic Characterization Survey, showed that 29.4% of people living in Chile are in poverty. He explained that the data was reached with the withdrawal of subsidies, capital income and the allocation of income made to households that own or are paying for their homes. Poverty in women amounts to 31.7% while in men it is 26.8%.

2.-The low level of wages
Although the economy has grown significantly in the last three decades and there is the highest GDP per capita in Latin America, there is a very low level of wages: in Chile half of the workers get less than about 570 dollars , while the cost of living is almost equivalent to the countries of Western Europe, with a GDP of at least double that of Chile. Only 15 to 20% have salaries above one thousand dollars.

In this context, the controversy over the value of the public transport ticket is not irrelevant. A study by the Diego Portales Universityk showed that, out of a total of 56 countries around the world, Chile is the ninth with the most expensive public transport. Low-income families can spend almost 30% of their income on transportation, while at the socioeconomic level of higher income the percentage of spending on the subject is less than 2%.

To this it is necessary to add the burden represented for low-income families in the increase of electricity and water costs, basic services that were privatized, and the crisis in the public health system. The price of housing increased up to 150 percent in the last decade, while salaries grew only 25% , according to a study by the Catholic University.

Social inequality can be explained, among other variables, in that collective bargaining barely covers 8 percent of workers. The possibility of organizing trade union, collective bargaining and the right to strike are severely diminished. No more than 15 percent of workers are unionized. In addition, it cannot be negotiated at the economic sector level: only at the enterprise level.

3.-The level of indebtedness of families
It is estimated that a family requires a minimum of $ 1,700 in the country to avoid having to borrow, which explains that the level of existing debt is very high. An average Chilean household of 3 or 4 people, to feed, dress, mobilize, pay basic bills and finance education and health, will inevitably have to resort to indebtedness. By the way, the same goes for higher-cost investments, such as housing or a car.

According to the data of the XXIV Personal Debt Report of the Universidad San Sebastián – Equifax, in March 2019, 4.6 million delinquent debtors were registered in Chile. The average delinquency amount is $ 1,754,525 (almost $ 2,500). In addition, according to data from the latest Survey of Family Budgets (VIII EPF) of the INE, more than 70% of Chilean households are in debt.

The report “National Accounts by Institutional Sector” of the Central Bank, last April, revealed that household indebtedness recorded a record high. “Households registered a debt stock equivalent to 73.3% of disposable income, up 3.2 percentage points at the end of the previous year,” it said. The rise in debts is due, according to the entity, to the increase in long-term loans with banks, such as consumer and mortgage loans, together with loans granted by other intermediaries such as retail or compensation funds.

4.-The exclusion of older adults
In the case of the elderly population, poverty almost reaches 40%. Of the 650,000 people who receive old-age pension, half cash less than $ 250. This, in circumstances that the Pension Fund Administrators (AFP), private entities that operate the pension savings of all Chileans, now administer about 220,000 million dollars, no less than 75 percent of Chilean GDP.

As is known, the replacement (or replacement) rate is the percentage of income in retirement compared to previous income as active workers. It is an indicator of the degree to which a pension system achieves its main social task: to replace the income of the active stage of a worker maintaining a purchasing power as high as possible in the retirement stage.

In the system of “individual capitalization” and management of pension savings by the AFPs, half of the pensions reach replacement rates of 20% or less (33% for men and 12% for women) and only with public spending of the State, through the Solidarity Pillar in its Solidarity Pension Contribution (APS), the median replacement rate reaches 40% of the last salaries, according to data from the Superintendence of Pensions. This reality is also valid for those who have contributed their entire lives. Half of those who have contributed all their lives, do not get a pension that exceeds the minimum wage.

It is not surprising then what is established by a study carried out by an academic of Gerontology of the Catholic University, which shows that the elderly is the age group that records more suicides.

It seems unquestionable that these facts are part of the widespread indignation and discomfort of the citizens and people of Chile. By the way, the problem will not be solved with the police and military occupation of the national territory.