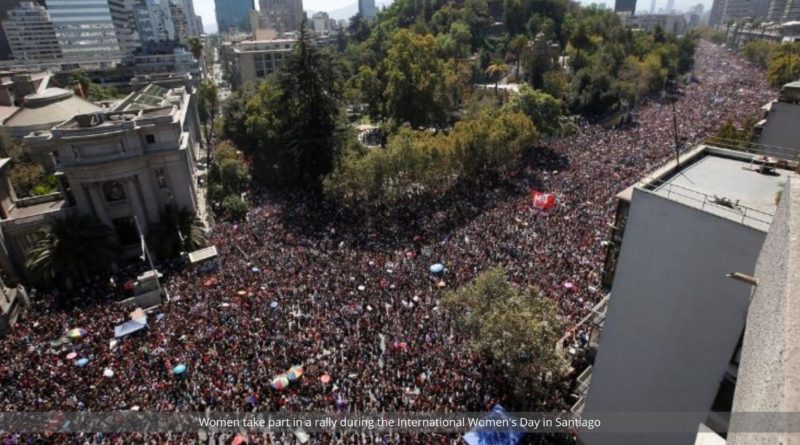 Hundreds of thousands of women demonstrated in the capital of Chile. They formed a tapestry of political, social, territorial and gender identities: feminists, communists, Trotskyists, anarchists, grandmothers, lesbians, disabled people.

From Santiago, an endless stream of colors is what the Alameda looks like from above. There are hundreds of thousands of women who march on their day to the Plaza de la Dignidad, their place, that of all Chileans who want to overturn the patriarchy, refound the state and get the resignation of President Sebastián Piñera. Well into the middle of the day the mobilization – which for the 8M coordinator 8M had two million attendees and 125 thousand according to the government – it is a tapestry of political, social, territorial and gender identities. Feminists, communists, socialists, Trotskyists, anarchists, students, teachers, housewives, grandmothers, mothers, daughters, granddaughters, lesbians, heterosexuals, natives, disabled peoples, all moving forward seeking to forge their own destiny. The pacas and the pacos – so are called the “carabineras” and “carabineros” here – are shown at the intersections of the extensive avenue with other streets. At times they are face to face with the protesters, as in the GAM (the Gabriela Mistral Cultural Center) where the situation is tense but does not get worse.

Galia Sandoval protects herself in the shade with her daughter and granddaughter from a merciless sun. She says that “Chile woke up. It was very asleep, we hoped that with democracy they would fix us but we continue as with the government of Pinochet, that of the “agreement”, that of Piñera. We were too passive.” She gives as an example that “here there is a very serious problem with health”. For her, those who have money got better if sick and those without money live by paracetamol (pain killers). A few meters from the Plaza Baquedano or Dignity as the mobilized people renamed it, the voice of Natalia Valdebenito, a well-known comedian who improvises a speech that is followed with phrases or applause of approval, resonates. She is leaning on the window of a building and says that “the new Chile will be made by all of us, with our own hands.”

Aerial footage of the massive and historic International Women's Day march in Chile.

Over a million Chilean women have reportedly taken to the streets of Santiago to protest against sexual violence.

Under that makeshift box and from which her amplified message is heard, the Alameda is already a mosaic of women who come and go. They arrive from different regions of Chile. Grouped or loose, photographs are taken, they meet in the GAM, they improvise choreographies, they go to the carabineras to sing “Paca jalera, you’re not my partner” and show them their painted breasts. A woman tells us the meaning of the word jalera: “those who do coke”, we already know that ‘Paca” means “pig”.

The Alternative Feminist Party (PAF) in formation is one of those that makes a point in the morning. They are half a hundred militants and seem like a prodigy of creativity. They sing the classic “May Piñera die, but not my partner” and they continue without stopping: “Paco machista, your son is feminist”, “Whore, all my life, but never paca.” The women of the Socialist Party march more rested on the opposite side of the Alameda. Claudia, one of the members of the column comments that “it is not a day to celebrate” and that the followers of Salvador Allende “are approving of the plebiscite of April 26”. That day it will be decided if the current constitution is modified or maintained. In a corner five blocks from the Plaza de la Dignidad, the Chilean Teachers College awaits its moment to move forward. Viviana, a teacher, a middle-aged woman, explains that “the first thing we are here for is a free and fearless education for all girls and women; but in addition we continue fighting for the historical debt with the teachers who are dying, they do not receive their social security benefits and the State does not allow them to retire”. To the side, her companions sing: “Hands up, pens down, we do not educate oppressive machos.”

Some skirmishes of protesters with cannon water trucks confirm that violence waits crouched around any corner. The confrontations are not serious because compared to the deaths accumulated by the police, other violence seems natural. At the end of the day, the official count indicates that there were 14 uniformed wounded and 7 detained. But the Institute of Human Rights (NHRI) says that there was an excessive use of pepper gas and that its own members were affected.

These incidents happened when the march was ending near the Palacio de la Moneda. The area had been fenced so that the attendants to the Plaza de la Dignidad would not approach. A few meters from the Alameda a small group of tourists outside the 8M took pictures of an eaglet that perched on a treetop. It looked like a scene taken from Animal Planet.

Cristian, one of the men in overwhelming minority during the formidable and colorful mobilization, had to bandage his right calf at a medical aid post. He seemed one more victim of repression. This chronicler was able to confirm it, although he clarified that he had tossed at him “a tear gas seven days ago and caused me an edema that I am still treating because I had a foot infection.” There are hundreds of these cases. They are sequels that will never feed the statistics of murders, torture, disappearances and violations committed by the repressive state apparatus.

Santiago, with its seven million inhabitants, was the soundboard of the 8M, but not the only one heard in all of Chile. The streets of Valparaíso, Concepción, Osorno and Puerto Montt were also overwhelmed by women who went out to say enough is enough. The Thesis, a feminist collective, put words to the march, perhaps one of the most numerous that was yesterday in the world. Its theme “A rapist in your path” became the anthem that identifies the struggle that goes in only one direction. The abolition of patriarchy which, as many banners said, “gives us Patri-Arcades.”