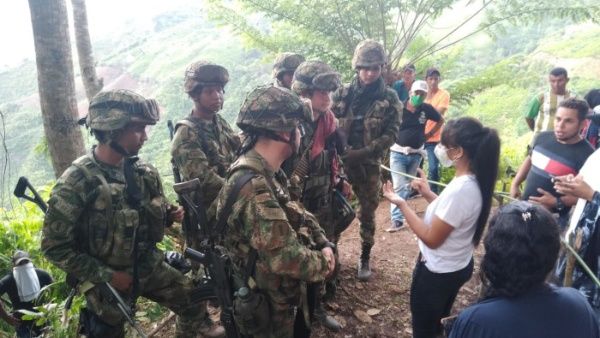 The Association of farmers in the Catatumbo region, Colombia, denounced extrajudicial executions by the Colombian army.

For its part, the Colombian army warned that the event occurred in the context of a skirmish that took place with members of irregular armed groups who commit crimes in the area.

In the midst of the situation, the population detained a non-commissioned officer and five soldiers, claiming they were allegedly involved in the incident.

The Association indicates through a statement “upon hearing the shots, the community reacted immediately, managing to see four uniformed people run from the scene, who were followed by the community, who saw them join a National Army military patrol.”

RELATED CONTENT: Puebla Group: Analysis Regarding the Role Played by the OAS in the October 2019 Bolivian Elections

The community blames the Army for the death of the young man, for which six soldiers were detained; a judicial delegation from the Attorney General’s Office moved to the rural area of ​​the municipality of Teorama.

In less than 24 hours, four social leaders were killed in different regions of Colombia.

Yoanny Yeffer Vanegas, peasant leader of the Picalojo village in Guaviare; Salvador Jaime Duran, in the village of Filoguamo (Teorama), Catatumbo region; Ovidio Baena, of the Unión Sindical Obrera; and an indigenous governor of Chocó, were the human rights defenders killed.

The acts of violence against the leaders became known this weekend, after being reported in social media accounts of the organizations to which they belonged.