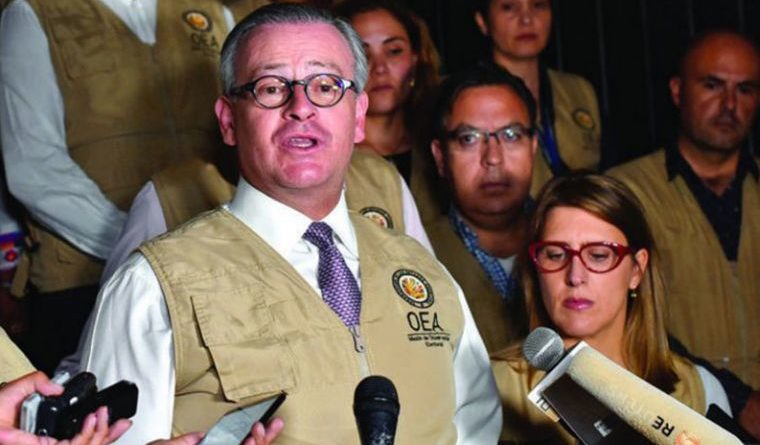 Members of the Latin American Council of Justice and Democracy (CLAJUD) met from June 14-18, 2020 to discuss new revelations regarding the Bolivian elections of October 2019 and the role played by the Organization of American States (OAS ) in these elections. CLAJUD members were able to learn about the various technical and academic studies that have been published in recent months on the subject. Based on the corresponding analysis, CLAJUD reports the following:

CLAJUD underscores the importance of the press release of October 21, 2019, from the OAS Electoral Observation Mission in Bolivia, the day after the election, in which the OAS reported that there had been “an inexplicable change in trend that drastically modifies the results of the election and generates loss of confidence in the electoral process.” [1]

The CLAJUD points out that the successive studies of the Center for Research in Economics and Politics (CEPR), [2] by researchers from the Laboratory of data and electoral science of the Massachusetts Institute of Technology (MIT), [3] and more recently by researchers from the University of Pennsylvania and Tulane University, [4] have shown that, contrary to what the OAS asserted, Evo Morales’ victory in the first electoral round was absolutely “explainable”. These investigations have shown that the high vote in favor of Evo Morales towards the end of the vote count that allowed him to pass the 10-point threshold over his closest rival was due to geographic areas very favorable to the Movement for Socialism (MAS) that reported their votes later. [5] In fact, the increase in the percentage of the vote in favor of MAS as the count progresses is a recurring phenomenon in Bolivia and could be observed in previous elections observed by the OAS without this organization having questioned the legitimacy of the results. [6]

The CLAJUD insists on the fact that all these investigations denounce the statistical malpractice of the OAS and observes, in addition, that its results were published by various media including the Washington Post and, more recently, the New York Times, [7] news that in turn was reproduced worldwide.

Faced with the forcefulness of these academic findings, CLAJUD observes that the OAS has downplayed its own statistical analysis, implicitly acknowledging the mistake made, or lowering its preeminence in the arguments outlined to defend its thesis against fraud. The OAS Secretary General Luis Almagro himself considered, in his singular statement of June 17, 2020, that the statistical analysis of the OAS is only an “element indicative of the alleged existence of irregularities” and that “a statistical analysis per se it does not validate or verify fraud, but gives indications of where to observe with more attention.” [8]

The CLAJUD observes that the OAS Secretary General’s statement does not mention that it was the statistical arguments of the OAS, now discredited by various academic studies, which served to demand, the day after the election, that the Supreme Electoral Tribunal (TSE ) Bolivian “fully respect the citizen’s will, honoring the values contained in the Inter-American Democratic Charter of the OAS.” It was on the basis of this statistical management, now considered misleading, that the OAS expressed “its deep concern and surprise at the drastic change that is difficult to justify in the trend of the preliminary results known after the polls closed,” leading to their “recommendations for a second round” meaning a clear interference in Bolivian internal affairs and a violation of the OAS Charter and the principles of international observation. [9]

Far from “giving indications of where to observe with greater attention,” CLAJUD considers that the statement of the OAS Electoral Observation Mission of October 21 installed in the national and international media a fallacious narrative of fraud that radicalized the opposition and contributed decisively to the coup d’etat of November 10.

CLAJUD also stresses that, without this initial accusation based on faulty statistical analysis, there would have been no subsequent electoral audit that opened the door for the OAS to support its allegations of fraud based on alleged irregularities found. The initial statistical fallacy exerted great importance in the process of denaturing the Bolivian electoral process by the OAS.

On November 10, the OAS released its Preliminary Audit Report, which denounces “a malicious manipulation of the elections” and “recommends another electoral process. Any future process must have new electoral authorities to be able to carry out reliable elections.” [10] CLAJUD observes that the OAS Preliminary Audit Report, published amid a highly polarized political situation, exacerbated the tense situation in Bolivia of the moment and played a decisive role in ensuring that the military high command of the Bolivian Armed Forces “suggest” President Evo Morales resign.

On December 4, 2019, the OAS published the OAS Final Audit Report [11], which was read at the plenary session of the OAS Permanent Council on December 12, in the presence – as speakers and special guests – of several Bolivian politicians who were in opposition to the government of President Morales and worked for the defenestration of his government. CLAJUD considers that the manner in which the Final Report was read at the OAS Permanent Council was highly irregular and politicized, and denotes a serious lack of impartiality on the part of the OAS in its process of observing and subsequently auditing the 2019 Bolivian elections.

CLAJUD learned that on June 11, 2020, CEPR published a report in Spanish [12] in which it analyzes in detail the irregularities identified by the OAS in its Final Audit Report and which have now become the main arguments of the organization given the delegitimization of its initial statistical analysis. The CEPR report demonstrates that the irregularities identified by the OAS audit report do not constitute an intentional manipulation of the results and, on the contrary, have been deliberately manipulated by the OAS to support its allegations of fraud. The calligraphic examination of the records shows that only one of the 226 records identified as irregular had a forged signature; and these 226 “irregular” acts give statistically identical results to the geographically contiguous acts.

Based on the technical analyses mentioned here, CLAJUD finds that the OAS observation and subsequent audit of the Bolivian elections of October 20, 2019 violate the “Declaration of Principles for International Election Observation” in the following points:

“4. (…) International observation of elections should, whenever possible, provide recommendations to improve the integrity and effectiveness of the electoral process and related processes, while avoiding interfering in said processes and causing the consequent disruption. (…)

7. International election observation missions are expected to make timely, accurate and impartial statements addressed to the public (including by providing copies to electoral authorities and other relevant national entities), presenting their findings and conclusions, as well as appropriate recommendations to their judgment can help improve the processes related to the elections (…)

9. International observation of elections must be carried out respecting the sovereignty of the country holding the elections and respecting the human rights of the people of the country. International election observation missions must respect the laws of the host country, as well as national authorities, including electoral bodies, and act in a manner consistent with the respect and promotion of human rights and fundamental freedoms. ” [14]

CLAJUD also finds that the OAS observation and subsequent audit of the Bolivian elections of October 20, 2019 violate the “Code of Conduct for International Election Observers” which establishes that:

Observers must maintain strict political impartiality at all times, even during leisure periods within the host country. They must not express or demonstrate biases or preferences in relation to national authorities, political parties, candidates or issues raised in referendums, or in relation to controversial facts that arise in the electoral process. (…)

Observers must ensure that all their observations are accurate. Observations must be complete, stating both positive and negative factors, distinguishing between significant and insignificant factors, and detecting patterns that may have a significant impact on the integrity of the electoral process. Observers’ judgments must conform to the highest standards of information accuracy and fairness of analysis, distinguishing subjective factors from objective evidence. Observers should base all conclusions on factual and verifiable evidence and not draw conclusions prematurely.” [15]

As a consequence of the above, CLAJUD members found that the accusations of fraud promoted by the OAS had serious repercussions on the democratic stability of Bolivia and on violations of the human rights of Bolivians, including their civil and political rights. In addition, CLAJUD members found that the Bolivian judicial authorities have relied on OAS reports and statements to arrest and prosecute members and workers of the Bolivian Supreme Electoral Tribunal, several of whom remain – eight months after the events – deprived of their liberty.

Due to the background presented here, CLAJUD members consider it imperative that the OAS activate its internal control and audit mechanisms to clarify the events described here, without prejudice to the OAS being able to face the respective demands before international human rights bodies.

Featured image: Manuel Gonzalez, former Costa Rican Chancellor and head of OAS electoral observation mission to Bolivia. Considered by many cor-responsible for the killing and incarceration of many by the de facto Bolivian government.