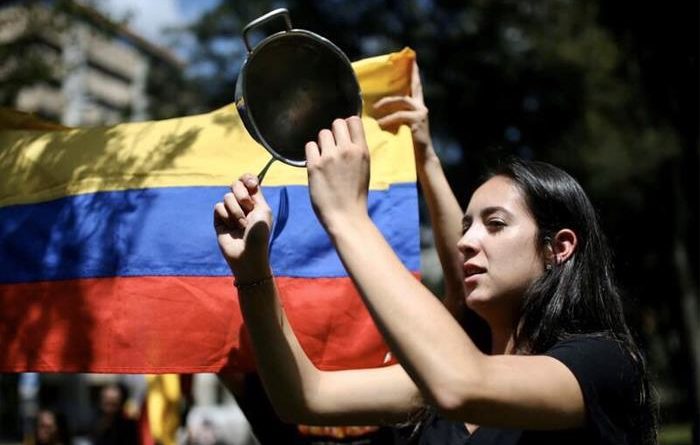 This activity will be a protest against the tiny increase in the minimum wage proposed by the Colombian Government.

After weeks of much uncertainty in relation to what the minimum wage increase would be for 2020, on December 26, President Iván Duque gave the announcement that all Colombia was waiting for: the increase will be 6%.

“The we made the increase in the minimum wage thinking about Colombia, about the growth of our economy, of being able to continue bringing equity to the regions, ” Duque wrote on his Twitter account.

# Casserole31D
Now, this is not exactly the thought that is in the head of thousands of Colombians who have shown their nonconformity in the face of an increase they consider “little” and “unworthy.”

“An increase of 6%, a mockery by President Duque of the country, of the poor and an addition to the 10 trillion gift that the tax reform gave to the super rich. Total rejection, hugely ridiculous of the government and businessmen for 20 thousand pesos, not amounting to one million,” was the criticism made by Diogenes Orjuela, president of the Unitary Central of Workers of Colombia (CUT).

Consequently, dozens of people on social networks have called a ‘cacerolazo’ for next December 31 at midnight, in order to “receive 2020 showing rejection of the current government in our country.”

“A cacerolazo on December 31, 2019, to receive 2020 with all possible noise, because they promised to lower taxes and an increase in the minimum responsible wage, and they did the opposite, justifying an indefinite National strike for Colombia,” said an Internet user on Twitter.

However, to encourage this social demonstration, several of the promoters cited the words of President Duque himself and Vice President Marta Lucía Ramírez, who called similar protests on the issue of minimum wage, during the two periods in which Juan Manuel Santos governed.

“Martuchis is right, the cacerolazo is the voice of the people! So why not a #Cacerolazo31D to close the year? A cacerolazo that reflects our indignation for the cascade of taxes that awaits us in the new year, for the massacres, for the misgovernment, etc.”, is the sarcastic comment of one of the opponents of the current government.

This demonstration is in addition to those held on November 21 and December 1, when thousands of Colombians peeked out of their windows and took to the streets to pound their pots against the policies of the Duque government in Colombia.

Featured image: Woman participates in a ‘cacerolazo’ against the Duque government in Colombia. Photo: Twitter / @jerojasrodrigue