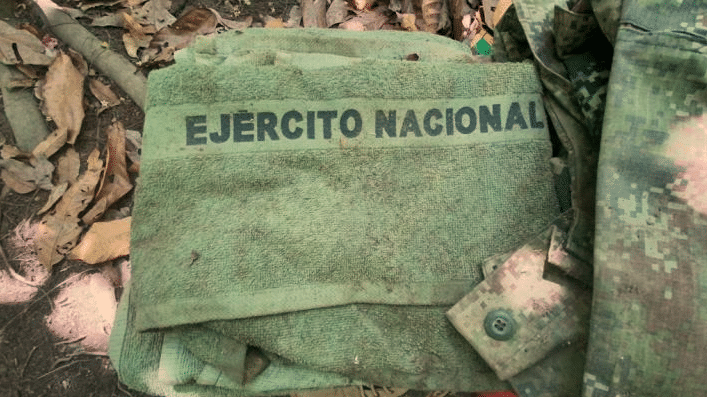 This Sunday, March 6, the Venezuelan Operation known as Escudo Bolivariano [Bolivarian Shield], intended to expel TANCOL (armed drug-trafficking Colombian terrorists) and other criminal organizations from Venezuela, confiscated weapons of various calibers and uniforms belonging to the Colombian military in the state of Apure.

The following objects were seized in the state of Apure by the División Fluvial 352 of the Bolivarian National Guard of Venezuela:

During the operations, which took place in Capanaparo, in the town of Rómulo Gallegos in the Elorza region, José Luis Rodríguez “El Negro” was detained after he was found hiding in some bushes. Apart from the aforementioned items, according to Últimas Noticias, “the camp was equipped with various medical supplies and two notebooks with logistical and tactical information.”

The FANB [Bolivarian National Armed Force] continues to be deployed,” wrote Venezuelan General Domingo Hernández Lárez, “expelling invading Colombians, merchants of death who bring explosions and drug laboratories. In this land of piece and freedom there is no place for narcotics, it is not in our nature.”

Military sources also reported that a camp with weapons and uniforms belonging to the Colombian army was found in Corral de Nava, a rural area in the township of Miranda, in Zulia State.

Sources have claimed that during the operation there was a confrontation between members of the criminal organization, led by Erick Alberto Parra Mendoza, a former military member also known as “Yeiko Masacre,” which resulted in the death of “El Noño.”

It isn’t the first time that FANB has found equipment and arms belonging to criminal organizations and the Colombian military on Venezuelan soil. Under the government of Iván Duque, Colombia’s military and criminal groups have maintained a symbiotic relationship and have sought to extend organized crime networks onto Venezuelan soil.